Chartering an innovative route to excellence in MCPS

MCPS may be one of the wealthiest school systems in the country, but that doesn't mean that it's perfect. Though its student failure rates may not be as large and discouraging as in school systems like District of Columbia Public Schools (DCPS), MCPS still neglects many demographics of its student population. Instead of ignoring struggling population groups and continuing unsuccessful instructional methods, MCPS should accept the applications for two new charter schools, thereby offering alternatives to standardized public school education.

Unlike other schools in MCPS, which are under strict regulation by the county and state, a charter school is a public school that is exempt from some of the rules imposed on regular public schools in exchange for accountability for its own results. Such freedoms include the ability to hire or fire personnel at will and the liberty to design an innovative curriculum. Many charter schools accept students through a lottery process. These schools have been especially successful in struggling school systems like DCPS, where about one-third of all students attend charter schools. 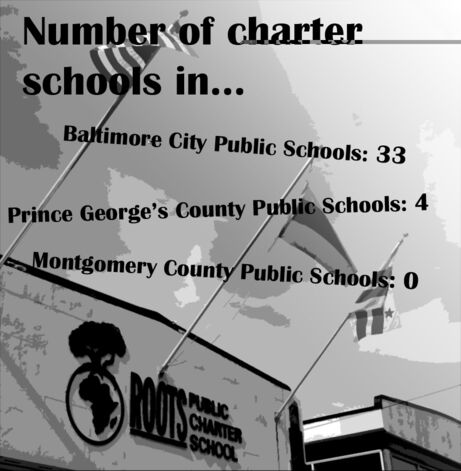 Photo:
The Board of Education (BOE) has never before accepted a charter school proposal, often claiming that the proposed school would be no different than a normal public school and would therefore be a waste of money. But in early March, two schools submitted new applications, both of which are currently pending approval from the BOE. One of the two, the Global Garden Public Charter School, would serve students from kindergarten through eighth grade and include an International Baccalaureate program. The other, the Community Montessori School, an expansion of the Crossway Community Center's current private Montessori school for children under the age of six, would educate students from pre-kindergarten through sixth grade. If the board accepts their applications, these schools would become the first two charter schools ever in MCPS and help to plug some holes in the school system's current organization.

In general, the demographics that are currently failing to meet standards are disadvantaged or minority populations. In 2009, MCPS failed to meet Annual Yearly Progress (AYP) standards for special education students at all three school levels. The school system also did not meet AYP for students with limited English proficiency or for black or free/reduced meals students in middle schools. Luckily, these are exactly the groups that charter schools target and aid most.

Parental approval of a school is also key to a child's educational success. But with annual private school tuitions ranging in the thousands, many parents are forced to send their children to public schools that they may see as overly standardized or regulated. According to Hales, many parents disapprove of public school practices like teaching to the test or using bribery to ensure student effort. However, these are methods that charter schools like Montessori avoid, she said, to parents' approval. A survey by the American Educational Research Association found that parents of students in Washington, D.C., charter schools rate their children's schools, teachers, principals and facilities higher than do parents of students in other D.C. public schools.

With charter schools attaining such high approval elsewhere, lack of finances is not a sufficient excuse for failure to accept the proposals. Nationwide, on average, charter schools across the country receive only 61 percent of the funds given to other public schools and are forced to raise much of the necessary money on their own, according to the Center for Education Reform. This would therefore allow MCPS to save money on the education of charter school students.

MCPS can proclaim its success in comparison to other failing school systems in the country, but its job will never be fully complete until every student is given the greatest possible chance for achievement later in life. MCPS must follow through on its claims of superiority by implementing charter schools to offer alternatives to standardized public school education.