Checking out of "The Office" 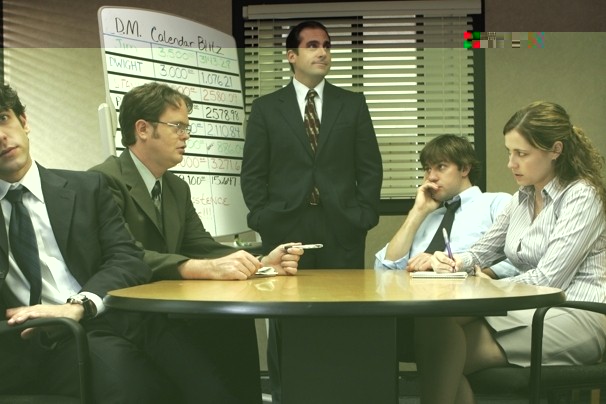 At the end of Thursday's episode of "The Office," Dunder Mifflin's Regional Manager boarded a plane for Colorado, leaving his office and his best friends behind him. In the same instant, actor Steve Carell ended his role as Michael Scott on NBC's the Office, completing episode 148 in his seven season run.

His kooky and recklessly hilarious character as manager of Dunder Mifflin Paper company has been a unique leader of a large, diverse and talented cast; his departure has everyone wondering who will replace him. Michael Scott's current replacement is Will Ferrell's character of D'Angelo Vicars, but the role is not permanent. In the remaining three episodes left in the season, Vicars's character will leave, and the office will be back to its original cast, minus Steve Carell.

Although there's natural anxiety and doubts about how to replace a character like Michael Scott, the structure of the farewell episode did an excellent job of calming those anxieties. In the episode, Michael spends the day saying goodbye to each coworker of the office, checking them off of a list after sharing a special moment. Whether Scott was sharing a final conversation with the frank and genuine Jim Halpert or shooting paintballs with Dwight Shrute from the dumpster behind the office, each goodbye highlighted the lovable idiosyncrasies of the character. The nuances of the exchanges were reminders of the high caliber cast that is staying behind.

The show has never been about Michael Scott, but the interactions in the office as a whole. With Scott gone, the chemistry might be a little bit different, but it's nothing to dread. There's not one character that can make or break a television show filled with dynamic and uniquely talented characters.

It was announced that potential candidates for the position include Ray Romano, James Spader, Will Arnett, Jim Carrey and Ricky Gervais, creator of the original British version of the Office. Such a range of actors shows that the producers are unsure of the exact flavor to add to the pot in the aftermath of Michael Scott's departure. Yet any of those characters can excel in an environment full of opportunities to interact with offbeat and interesting characters.

Michael Scott's long awaited departure from NBC's the Office this week coincidentally overlapped the announcement Blazers received Friday that Principal Darryl Williams will leave Blair at the end of the year. Blair is currently facing three major departures: a principal, a county Superintendent, and a graduating senior class. I think that Blair is an equally dynamic setting capable of adapting to change in the wake many departures. Just like The Office, Blair is a community that will be renewed and refreshed by the enthusiasm of a new principal the directions of a superintendent and the energy of a new class of freshmen students.