The Churchill Bulldogs (3-0) beat Blair's swim and dive team (0-3) Saturday in the third divisional meet of the season, 86-85. Although it was a disappointing loss for the Blazers, the team rallied throughout the meet in an attempt to beat one of their main rivals. 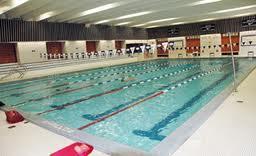 Photo: The Blazers lost a close fought meet to Churchill at the Rockville Swim and Fitness Center

Photo: The Blazers lost a close fought meet to Churchill at the Rockville Swim and Fitness Center

Co-coach Kelly Crowder pinpointed specific races that would have made Saturday's meet the Blazers' first win. "Getting second place in the 400 free event would have put us over the edge. We fought to the end and we had a lot of touch outs," Crowder said.

According to senior co-captain Jack Foster, Blair's boys' and girls' teams had different objectives for the meet because of the varying skill levels between the two teams. "The team focused on our guys today because this was the first meet where we had a shot at winning," Foster said. "Churchill's girls are some of the best in the county so our girls worked on race strategies and technique."

Senior co-captain Emily Lathrop is proud of the effort the girls' team put into their races and she believes that the lineup helped them in some of the toss-up events. "We won some close races because we stacked our events more," Lathrop said.

Crowder agrees that the lineup was strong this week since she and co-coach James Demma chose only the fastest swimmers for each race. However, there were still certain events that were necessary losses. "For the 50 free event, we didn't have enough swimmers in order to powerhouse it. We basically gave them that event because they had two really fast swimmers," Crowder said. "It was the best way to go because we could focus on other events."

Crowder believes that many of the swimmers didn't perform as well because the meet took place in the afternoon, which is different from the other meets the Blazers have competed in. "It was a weird time to swim. It's kind of the in-between meet since it wasn't a morning or night meet," Crowder said. "The kids weren't all swimming their best because of that but they gave it their all."

One particular swimmer that Crowder commended for his effort was senior Noel Antonisse. "Noel really fought the last half of his last lap. That stands out, that he worked hard to get those points," Crowder said. Demma also commended sophomore Amy Zhou for her performance in the 100 fly event.

Lathrop is unsure how the team will fare at next week's meet against Whitman. "Whitman's a tough team. We didn't win against them last year," Lathrop said.

However, Coach Crowder is excited since the team will have extra supporters. "The cheerleaders will be coming," Crowder said. "That will probably get the kids pumped up.