Sitting behind his classroom's overhead projector, ninth grade English teacher Adam Clay twiddles his fingers. His eyes are tense as he realizes something important, and puts his hands on his knees. "By the way, there are two Mr. Clays. I'm Mr. Adam Clay," he says with concern. His eyes relax and he goes back to twiddling his fingers. 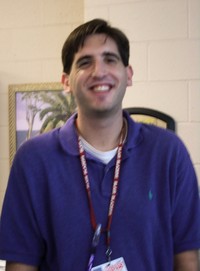 Before becoming a teacher, Clay worked in marketing and disliked it. Looking around and putting his head back to think, he explains that since he loves kids and English, he quit marketing to become a teacher. "I made the switch, and I couldn't be happier," he says with a grin.

Clay is not married yet, and has no kids or pets, which leaves enough time for his favorite hobbies, which include reading, spending time with his friends, playing hoops, and watching movies. Clay explains that even though he was never good enough to qualify for a school basketball or volleyball team, he still "loves playing."

After the sun goes down, Clay turns on the television and tunes in to The West Wing, Ed, and The O.C., even though "The O.C. kind of embarrasses" him. Clay also admits to being a big movie buff.

At this point, Clay recognizes one of his students, freshman Patriciana Tenicela, in the hallway and calls her in. They joke around about which actors would play Clay in a movie. Tenicela picks Tom Cruise, but Clay decides on John Favreau, with Brooke Burke as the leading lady. Running his hands through his slightly gelled hair, Clay laughs with Tenicela about Tom Cruise and opens his mouth to say something, but decides that he has said enough on this topic.

Clay says that he hates most forms of shopping, but enjoys Barnes and Noble's. One thing he really likes is the Toyota Corolla. Clay owns one, and enjoys driving it to and from bookstores. On his car radio, and his radio at home, he listens to just about everything. "I like classic rock. Really anything but country," he decides.

Hoping that this comment will not get him in trouble with Blair's country music fans, Clay leans back in his chair and plays with the tape that is coming off of a three of diamonds card on his desk. He begins to discuss the personalities of people with Tenicela. Clay says that he "really enjoys down to Earth people, both in the acting world and in real life." Tenicela agrees, they both like people who act "like they are supposed to." Tenicela asks why he is a teacher, and he replies, "Because I hate kids so much." For a couple seconds he keeps a straight face, but quickly bursts into laughter, while Tenicela chuckles nervously.

Tenicela looks at her watch and excuses herself to go to marching band practice. As Tenicela gets up from her seat to leave, she says goodbye to Clay, and tells him that he "rocks." As she puts it, "Mr. Clay is a really cool teacher." Tenicela explains that Clay is great at "keeping students interested and he seems to really enjoy teaching, which is always a bonus."