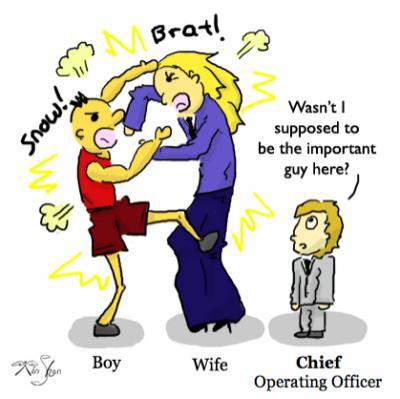 Photo:
When Kori posted the rude return call on his Facebook profile – from where it was taken to Youtube – it created a roar in the community, an unintended consequence of an innocent action (the call has since been removed, by Kori's request). But Candy Tistdat's immature message deserved the negative exposure it received. In her minute-long tirade, Candy Tistdat reprimanded Kori, saying "[My husband] is out almost every single night of the week at meetings for snotty-nosed little brats."

Unfortunately, there is no audio record of Kori's initial call to the Tistdat household. The only information about Kori's call, revealed in Tistdat's return message, is that he complained about having a school day and insinuated that the superintendent purposely did not pick up his phone. As an adult, Candy Tistdat, the wife of a public official, should have acted maturely because her actions contribute to both the Tistdat's and FCPS' reputation. Rather than being provoked, the Tistdats could have easily ignored Kori's call or responded civilly.

There is something to be said about Kori's call to the COO. While it did push the limits of privacy, the Tistdat home number was publicly listed - Candy Tistdat has no right to complain.

Kori's call underlies a clearly missing link between the public officials of FCPS and their constituents. Three inches of snow is generally assumed to lead to a school closure, so not canceling school and failing to give an explanation is the fault of the administration. Unfortunately, there is no way for students themselves to make inquiries about snow days. Students and parents should be informed about why an unsafe decision is made. A brief explanation should be posted on the county web site to avoid miscommunication.

And who's to say that parents and students shouldn't have some say in affecting change throughout the county? Both parties deserve at least a minor role in making such an important decision. It is the responsibility of the school to transport students to and from school. However, students that live in a certain area around the school do not have bus access and have to walk to school every day. When there is snow and ice on the roads, sidewalks are frequently forgotten and can be slippery. Parents should be able to call a phone number to voice concerns about their kindergartener possibly slipping on ice and cracking her skull. Likewise, students should be able to call a county number to tell administrators that there are wintry obstacles in the way of getting to school.

MCPS should follow suit in bridging the link between constituents and administration. Students, parents and teachers have little knowledge about how decisions are made or why they are made that way. Members of the community should know if school is cancelled when there is snow blocking the entrance to Damascus High School or sleet icing the roads around Blair. The administration should inform the community about actions that affect it, no matter how small these actions are.

Big administrative flaws cause confusion and judgment errors by people like Candy Tistdat and Kori. Until there is a constructive approach to communication between the administration and the community, calls like Kori's will remain justified.

Candy Tistdat's message
The audio has since been removed from Facebook and Youtube, as per Kori's request
"How dare you call us at home? If you've got a problem with going to school, you do not call somebody's house and complain about it.
My husband was up at 4'o clock this morning, trying to decide the best thing to do to send you to school on a day when the weatherman is calling for one thing and another thing happened.
You don't begin to know what you are talking about. And don't you ever call here again. My husband has been at the office since 6:30 this morning, so don't you even suggest that he purposely didn't answer his phone. He is out almost every single night of the week at meetings for snotty-nosed little brats. And he may not have called you but it is not because he's home, because it snowed. Get over it kid and go to school. Get an education, that's what you're there for."