Information leading up to release

After the Philadelphia Eagles seemed to be dominating the rest of the NFC East division in the NFL's free agency, a surprising twist came up about two weeks ago. Star wide receiver DeSean Jackson was reportedly on the Eagles’ trading block. The reports then turned to the team potentially releasing the WR, who is coming off career highs in touchdowns, yards and catches. The report was not taken very seriously, however, and many media networks shrugged it off. Adding to those denials, Jackson and Eagles’ head coach Chip Kelly met shortly after the report and the two expressed mutual agreement.

At the NFL Owners Meetings later that week, however, Eagles’ general manager Howie Roseman had the chance to deny rumors of Jackson leaving the team, but chose not to. This was an almost sure sign that Jackson was leaving because general managers never tell the media that a player will be traded to get the best offer for that player, foreshadowing a poor trade or a release. The Eagles released Jackson that Friday, not a trade, just a release, an apparent offense to Jackson.

The Eagles reasons for releasing Jackson

Now this topic is where the story gets its controversy. The Eagles pointed out two potential reasons for his release, but did not explain the true cause. The first revolves around Jackson in the Eagles’ locker room. The team stated that his attitude could be at times, a locker room distraction and that his work ethic was not one that the Eagles wanted on the team.

The other reason is the one that has been more discussed: Jackson's potential gang affiliations in his home city of Los Angeles. The only real evidence of this strong accusation came from an article from nj.com directly accusing Jackson of this (the article has since been modified).

It is the little evidence along with little explanation from the Eagles as to why Jackson was released that has the majority of the public as well as current and former NFL players outraged. Since the release Jackson became the hottest commodity in the NFL, hearing from more than ten teams within an hour of his release.

Jackson's signing and its aftermath 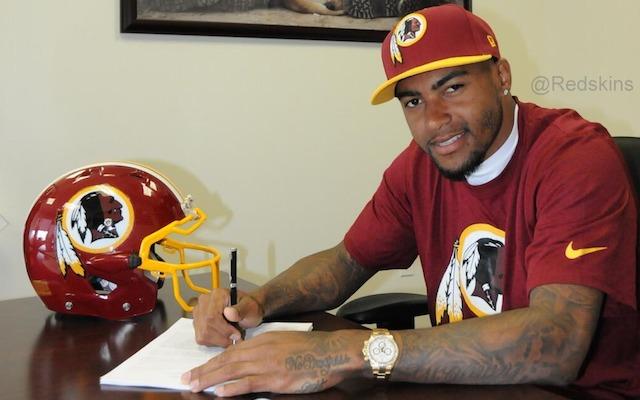 Approximately thirty-six hours after the Eagles released DeSean Jackson, he was already on an airplane to Dulles Airport to visit with the hometown Washington Redskins. Jackson spent that Monday night eating dinner at a restaurant with members of the coaching staff, then clubbing with star players DeAngelo Hall and Pierre Garcon. At this point, his signing with the Redskins was inevitable.

Jackson signed a 3-year, 24 million dollar contract with his new team very soon after, which made him surprisingly less money than he would have made had he stayed an Eagle. Prominent members of the Redskins such as new head coach Jay Gruden, star quarterback Robert Griffin III and offensive captain, left tackle Trent Williams have all publicly expressed support of the organization for signing Jackson.

So far Jackson and the Redskins seem like a perfect match, but after missing the first week of the team's offseason activities, we will see how Jackson's relationship in his new locker room fluctuates during the course of the season. Right now, however, Jackson gives Washington explosive play-making ability on offense and surely some happy fans.

My opinions on the situation

First of all, I’ll address DeSean Jackson being a locker room distraction and having character issues. This was the knock on him ever since he was drafted six years ago from the University of California and continuously throughout his NFL career. So for that to suddenly be a reason to cut such a promising receiver seems unlikely to me. I believe the Eagles have two potential reasons for releasing DeSean Jackson.

The first is Jackson's contract situation. Jackson was due to make $10.5 million this year and even more the following season. The Eagles knew that they would not be able to keep Jackson's contract and sign young stars on the team to extensions. They also likely believed they could get someone not far behind Jackson's skillset who would take a much smaller paycheck.

The second reason is information about Jackson's gang affiliations not yet leaked to the media. If potential gang affiliations had to do with Jackson's release, the evidence was not told to the media. There is no way the Eagles would cut a promising wide receiver who just totaled career highs in nearly every major receiving statistic and seemed to fit like a glove in Kelly's offensive scheme just because of some accusatory article. The team would have to have known more evidence to put such a major accusation like that against Jackson. I believe the Eagles do indeed know something about Jackson's behavior that the media has not gotten its hands on yet.

Overall, from a football only standpoint, Philadelphia made a risky move cutting Jackson, but could reap enormous benefits from the move in the future. Assuming they can find another productive receiver for the offense, they can benefit from the added salary cap room. This means they can extend the contracts of young promising players such as quarterback Nick Foles, inside linebacker Mychal Kendricks, center Jason Kelce and left guard Evan Mathis.

As for the Redskins picking up Jackson, it immediately makes him and Pierre Garcon one of the most dominant receiver duos in the league. It also severely intensifies the Redskins and Eagles rivalry when the two potential NFC East favorites see each other twice a year. Also, who knows, this may be the move that gives DeSean Jackson much needed motivation to turn his All-Pro level talent, into an All-Pro level work ethic and locker room presence.