A rare comfort in a time of economic chaos and tumultuous health care reform is that world leaders have not pushed global warming to the bottom of their laundry list of goals. At the G-8 Summit two weeks ago the environment was one of the key issues on the agenda. 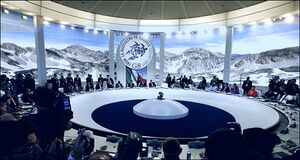 Round Table at G-8 Summit

Photo: A view of a round table session at the G-8 summit in L'Aquila, Italy. Picture courtesy of The Washington Post.

Photo: A view of a round table session at the G-8 summit in L'Aquila, Italy. Picture courtesy of The Washington Post.

The Group of Eight, or G-8, consists of the world's eight most industrialized nations: the United States, Japan, Germany, Britain, France, Italy, Canada and Russia. At this year's annual forum in L'Aquila, Italy, the nations' eight leaders pledged to keep global average temperatures from rising more than 3.6 degrees Fahrenheit above what average temperatures were before industrial pollution began over a century ago. According to the Washington Post, temperatures have already risen by more than half that amount, leaving nations little room for error.

This initiative, a permanent, but not pressing, goal is exactly what the world needs right now in terms of environmental policy. More of a promise than an obligation to reach a statistic, the goal does not assign a deadline but allows world leaders time to devise the most effective plan possible to control climate change. Attempting to force nations to meet a specific date is extremely irrational not only due to the rate at which developing nations such as India and China are contributing to pollution, but also because current world focus is on the global recession. According to the New York Times, harvesting alternative energy from sources such as the wind and sun costs over 50 percent more than traditional energy sources, an incredibly unattractive figure in these troubled economic times. The climate goal set at the G-8 Summit allows governments time to both repair the economy and utilize research to improve the cost effectiveness of alternative energy.

Many may think that in order to lower alternative energy costs significantly, we must pump more money into environmental research. But every day research already in progress gets us closer to cheaper alternative energy. It is not a question of the quality or amount of research being done, but the amount of time we have to research. The flexible timeline proposed at the summit gives nations more time resulting in lower "green" energy costs. The new climate goal effectively takes pressure off of world leaders, allows them to focus on the economy and lets the world spend money on renewable energy wisely, all the while keeping global warming at bay.

Though the G-8 leaders set an achievable goal, their plan will not work without the support of India and China. Currently, the two nations have not signed on with other world leaders to minimize climate change. India rivals the U.S. in annual greenhouse gas emissions, while India and China both lead the group of fastest growing countries, both economically and industrially. Due to the amount of pollution they create, India and China's support is crucial if the G-8 truly wants to reduce rising temperatures.

Regardless of the G-8's actions, we here at home must pick up the slack and start cleaning up the environment. According to the Energy Information Administration (EIA), vehicular pollution is the main contributor to greenhouse gasses emitted in the U.S. Blazers can help the G-8 reach its goal by carpooling, walking or biking more often. Taking just one car off the road takes almost 12,000 pounds of greenhouse gasses out of the air annually.

In addition to controlling greenhouse gasses, Blazers can help the environment in other ways by recycling and cutting down on their use of electricity. There are dozens of well-known ways to help the environment, like turning off the light when leaving a room, but these methods are changing and evolving all the time. Since recycling is one of the easiest ways to help the environment, it is important for Americans to stay up to date on their county's recycling rules. Blazers should visit the Montgomery County web site for important information on what can and cannot be recycled. For example, bottle caps cannot be recycled, but yogurt cups now can. Keeping our environment clean is important, and Blazers can easily make a difference.

Despite other significant issues such as the economy, world leaders found time to set a realistic goal and try to clean up the earth. They will reach it without India and China and they certainly will not unless citizens throughout the world make a conscious effort to clean up. The G-8 found the environment important enough to make it a key issue at the summit and so should everyone else.