Coaching from outside the box

Blair coaches from other schools struggle to strike a balance

Feb. 27, 2007 was a momentous day at Magruder High School. The night before, the vaunted Colonels boys' basketball team had advanced to the third round of the regional playoffs with an impressive victory over the Montgomery Blair Blazers in front of their raucous home crowd. But then-Magruder English teacher Mark DeStefano was not in a celebratory mood. DeStefano, coach of the Blair boys' varsity basketball team, had been on the receiving end of the 58-31 trouncing.

Blair coaches who teach at other schools are uncommon, but face a tall task in juggling their outside lives with coaching. DeStefano has since joined Blair's English department, but the struggle continues; of the 29 current head coaches, six do not work in the school in some capacity, teaching or otherwise. The number is even higher when taking into account assistant coaches and others involved with Blair's athletic programs. 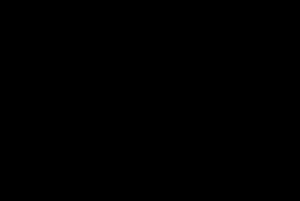 Being in the Blair system is a tremendous asset for a coach, according to Athletic Director Dale Miller. During the hiring process, a candidate's ability to join the Blair staff is an important factor to consider. "It's an advantage, no question about that, to the athletes, to the sport and to the coach," he says. "And especially from an athletic director's standpoint, you want to try to get your coaches at least in the building."

According to Miller, Blair probably has more in-school coaches than any other school in the county, a blessing he attributes to the size of the Blair staff. That number has increased for the spring season, as Ronnie Joice, last year's gymnastics coach who did not work at Blair, left due to conflicts with her outside job, replaced by Heather Nelson from Blair's physical education department.

DeStefano, a 10th grade English teacher at Blair, has now been on both sides, coaching the varsity boys' basketball team as an outsider and as a Blair staff member. "[Being here] is an advantage, definitely," he says. "It makes things much more convenient."

DeStefano's experience has been smoother this year, he says, not just because it is his second season in charge of the team, but also because he is in the building throughout the day. He is able to run his program more efficiently because he now has the ability to communicate with other adults in the building, forging relationships with administrators, security and other staff members. "Being in the building allows things to flow a lot better," he says.

For five seasons, Blair science teacher John Haigh coached Blair's junior varsity boys' soccer team before accepting a position as the coach of Springbrook High School's varsity boys' soccer team, where he is finishing his third season. Like DeStefano, Haigh admits that being an outsider is a disadvantage. "It's always easier to coach at the same school, no doubt," he says, also citing the administrative difficulties associated with his position. "[Being outside the building] makes things harder on a day-to-day basis."

Being on hand at Blair constantly is also a tremendous benefit when a problem comes up, according to DeStefano. Whereas last year, the team had to wait until DeStefano arrived after school before dealing with a problem, issues can now be dealt with as they arise. "You want to know sooner rather than later," he says. "Confrontation is facing the truth." 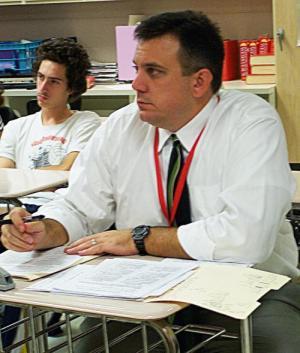 Photo: Mark DeStefano with a student in his 10th grade English class.

Mark DeStefano with a student in his 10th grade English class. Photo courtesy of Julia Seiger.

DeStefano sees no disadvantages to him being a teacher at Blair, but he does admit that his student-athletes may not see it the same way. With DeStefano in the building at all times, players cannot get away with poor behavior without alerting their coach. Still DeStefano feels that his presence has a positive impact on his players. Not only can he build stronger relationships with Blair's staff and students, but DeStefano can also serve as a role model and authority figure as a part of the staff.

According to Haigh, his coaching complicates his teaching at Blair as well. "It's difficult on my students," he says. Because he must leave the building earlier to reach Springbrook, Haigh is not always available for extra help after school, especially on game days. On afternoons during the soccer season, Haigh is usually out of Blair by 2:30 p.m.

Despite the challenges, Haigh relishes his role and does not foresee any changes in the future. He plans on continuing to teach science at Blair while coaching at Springbrook, and praises both athletic departments for giving him such an opportunity. "I'm really enjoying the Springbrook community," he says.

Besides the head coach, there are many others involved with Blair sports programs who are integral components to the coaching staff. Because of their more fluid positions, these assistants can come from a number of facets of the Blair community. Andrew Wallis, an assistant coach for the varsity wrestling team, has a day job and schoolwork to stay on top of when not coaching; Wallis works as a lifeguard at the Silver Spring YMCA and takes classes at Montgomery College.

The 2004 Blair graduate and former wrestler acknowledges the difficulties in trying to balance his coaching with a life outside of Blair. "It's definitely a struggle," he says. "Bills got to be paid, and education is second."

First-year indoor and outdoor track head coach Ralph Penn served as an assistant coach on both teams for two years before assuming his current position. Penn retired last year after serving as an Educational Facilities Officer (EFO) for the Blair district from 2003 to 2007, a decision that played a large part in his becoming head coach, Penn says. Because of his newfound flexibility, Penn can spend more time with the team, and thus take on a greater responsibility. "I have more time to really get the program going," he says.

As a police officer, Penn would have to work until 3 or 4 p.m. every day, while track practice during the season began around 3:15, leaving little to no time for other team-related obligations. "I don't know how I'd been able to it before," Penn says. "I didn't have the time to devote to the team."

According to Penn, his experiences as an EFO at Blair and as a police officer in general are an asset to his coaching. Penn knows many students from his EFO days, and although he is retired, Penn is still very involved in the Blair community and can be seen in Blair's halls. "I'm here just about five days a week," he says. "It's rewarding, being able to coach at Blair and having the opportunity to work with students."

In Penn's eyes, coaching while teaching at the same school is a plus, but not the most important factor. "It's probably an advantage," he says. "But if you've got a coach with the commitment to spend the time, that's the important thing."