The Blair (5-5) coed volleyball team defeated the Kennedy Cavaliers in straight games, 25-8, 25-14 and 25-17 on Tuesday. The Blazers dominated with excellent serving, racking up a total of 19 aces throughout the match. 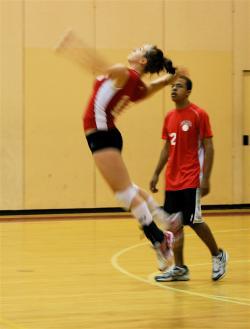 The Blazers started the first game hot, taking an early 7-4 lead with kills by junior Ignacio "Nacho" Gaete and sophomore Sibyl Brown. The Cavaliers battled back to cut the score to 7-6. But, the Blazers responded with an 11-0 run led by sophomore Vikas Mendhiratta's five aces. With the score 21-8, senior co-captain Julie Brice took over with four straight aces and the Blazers won the first game 25-8.

The Blazers started out the second game even stronger, building an early 9-0 lead with sophomore Julia Skolnik contributing three aces. Head coach Greg Franklin played six bench players to start the second game to allow the starters some rest during the set.

The Blazers continued to play strong and make many large runs. With the score 12-7, the Blazers scored six unanswered points. Sophomore Devin Peck contributed huge off the bench with an ace and a kill during the run. Peck finished the game with four kills, one ace and two blocks. Key mistakes by the Cavaliers helped the Blazers to secure the second game, 25-14. 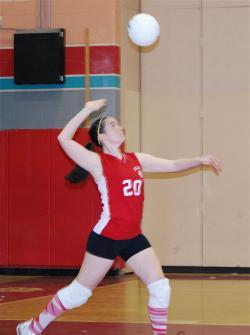 The third game started off with the Blazers building an early lead. A set of four straight aces by senior co-captain Olivia Bozik helped Blair jump on top 7-2, but the Cavaliers battled back to cut the score to 12-11. The Blazers were able to regain control of the game with key kills by Bozik and Peck to solidify the final set 25-17.

Both Franklin and Bozik were glad that the team was able to go deep into the bench. "It's pretty awesome we got to sub in a lot of people who don't normally get to play a lot," Bozik said.

"It was a good match," Franklin said. "It was really the first time I got to play everybody and everybody got to play significant minutes. Our passing and covering was also very good. That made the difference for us and most of the points Kennedy got were off our mistakes."

The Blazers' final home game is Monday, May 5 against Wheaton at 5:15 p.m.