A valiant effort from coed volleyball could not overcome the resounding spikes and jump serves of Damascus, as the Blazers (7-2) fell to the Hornets in four thrilling games, 25-16, 26-28, 25-17 and 25-13, ending their six-game winning streak. Armed with superior height, power and depth, the Hornets were able to dominate the net game and prevail into the later sets as Blair's fatigue became evident. Although the Blazers lost the match, they were able to win the exhilarating second set, the first set that Damascus has dropped all season. 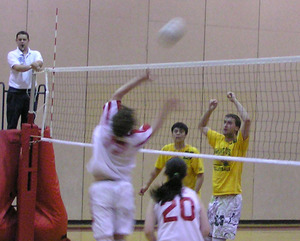 "I'm happy we took a set," said senior co-captain Tim Lee. "They're a really good team." The Damascus(9-0) roster includes Ryan Mulsteff and Kailee May, two of the county's top players, who both had domineering performances on Wednesday. Lee cited the depth of their team and their difficult to return jump serves as well as their star performers as keys to victory. "Damascus had a very deep, very talented team," agreed coach Greg Franklin.

The Blazers and Hornets went toe-to-toe in the early goings of the first game, as neither squad was able to establish a consistent offensive rhythm. Damascus broke the standstill first, taking a three point lead after senior Cal Burton was unable to handle a Hornets tip. On the next play, Burton responded with a block at the net brought the game within two, and an ace by Lee tied the game at 11 before Damascus countered. After senior Wendolyn Quintanilla scored on a point that brushed the net, Damascus went on a 7-0 tear that the Blazers could not match. A Damascus ace sealed the first game, 25-16.

The thrilling second set began with three quick Damascus points off of a block, a spike and an ace. Momentum soon swung the game in Blair's favor, as the Blazers were able to capitalize on two missed serves. Two sharp plays from Burton at the net tied the game at 10-all, and moments later, a Burton spike took the lead at 12-11. The Blazers scored three straight with senior Neil Mendhiratta serving, but Damascus returned with a run of their own after a serve from junior Julie Zhu went long and a spike by Lee went into the net. The teams traded points, tied at 23-23. While the set is a 25 point contest, a two-point win margin is necessary. Three times the Blazers were down to their last point, and three times the Blazers prevailed with a Lee spike and two outs from Damascus. With senior Felicia Olawuni serving, Blair scored three straight points in an impressive display of emotion, winning the set 28-26.

After losing their first set all year, the Hornets came back with a vengeance in the third. Like the first game, this set was marked by an early point-by-point battle before Damascus was able to pull away. After a block by Burton put the score at 9-8 Damascus, the Hornets began a 9-4 run, capped by three unreturned spikes. A block at the net by senior Jung Han sparked a mini-rally by Blair, but the Blazers were unable to run with it, making unforced errors and hitting playable balls out. A serve into the net by freshman Kaiti Hague ended the game, 25-17.

By the fourth game, the depth of Damascus became evident, as the tired Blazers were unable to keep up with the onslaught of spikes and jump serves. The visitors jumped out to a quick 8-1 lead, as the barrage of spikes was more than Blair could handle. The Blazers pulled to within five at 12-7 off a well-placed hit by senior Jung Han, but could not get any closer as their intensity deteriorated. Lee sat out the final plays of the game with leg cramps, having played substantial minutes in every game this season before his late exit. "It was weird playing without him," explained senior Brian Han.

Lee stated that his injury is not serious, instead just the result of fatigue and wear. "We were getting tired [by the game's end], and they picked up their intensity," he said. The 25-13 drubbing ended the game, snapping the Blazers' six-game win streak.

Damascus coach K.C. Landefeld was very satisfied with his team's performance in their most competitive game thus far, especially with his star players, Mulsteff and May. "The team performed well in a pressure situation. This is the closest we've have been challenged," he said. Landefeld was also very impressed with Blair's showing. "[Blair] was by far the best team we've played this year," said Landefeld. "They're going to be a scary team in the playoffs. It will be very interesting."

Despite the loss, both Lee and Franklin expressed optimism, given the strength of their opponent. Both felt that the Blazers held their own well in the early games before falling victim to their opponent's depth. Undoubtedly one of the top teams in the county, the Hornets poised to take the top seed in the upcoming county playoffs.

"This was by far the toughest game of the season," said Franklin. "I'm looking forward to seeing them again in the playoffs."