Colbert through the years

CBS announced last month that comedian Stephen Colbert would be taking over as host of the Late Show following Dave Letterman's retirement sometime in 2015. Colbert, who currently hosts The Colbert Report on Comedy Central, has become a sensation over the last nine years for his humorous political commentary.

While it's unlikely to have impacted his departure, the announcement that Colbert would take over for Letterman came in the wake of the #CancelColbert movement. Despite being involved in this recent "controversy," The Colbert Report will certainly go down in history as a form of political satire of its own, that through the years was able to turn heads as well as the minds of skeptics who doubted his ability to maintain his act as a radical conservative, after leaving The Daily Show with Jon Stewart to debut The Colbert Report in 2005. 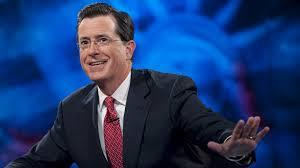 Photo: Colbert is a well known comedian on Comedy Central.

Colbert has not only satirized politics with his conservative persona, but also with his array of recurring segments such as "Better Know a District," "The Word," "Cheating Death (With Dr. Stephen T. Colbert D.F.A.) and "Colbert Platinum."

So in honor of Colbert's move to CBS, here are some memorable Colbert Report moments:

"The Word": (2007) Colbert's word this time was "Wikilobbying," attempts by companies to pay people in order to get a more favorable article on Wikipedia. Colbert took this ridiculous idea to new heights by telling all his viewers to change the entry about elephants to say that elephant populations had tripled. After this was done, wikipedia read "Thanks to the efforts of Stephen Colbert elephant populations have tripled over the last 10 years.”

Colbert also mastered the art of making fun of people while seeming completely supportive. Many times throughout the show he pokes fun at Fox News just by supporting their ideas. Other times, political candidates did the trick. In this video, candidate for New York mayor Joe Lhota targets the anti-kitten population after a loose kitten stopped Subway operation.

On another occasion, a Minnesota political candidate decided that he was going to himself with a business, a completely illegal practice.

Another one that exposes a problem with society but does so while making you crack up is the "Colbert Platinum” segment from 2013 in which he discusses the "Freedom Ship” where rich people (like himself) can go live the remainder of their lives at sea while never having to pay any more taxes! Truly a great escape.

If one is simply looking to mock the efforts of those trying to bring us back into the 1700s by fighting against the 17th amendment of the United States which calls for the direct election of senators, look no further than this hilarious clip:

However, despite his comedic greatness, many fans are now questioning if he can maintain this level of humor at his new job on The Late Show. Colbert has displayed his ingenuity time and time, including when he visited Fox News' The O'Reilly Factor.