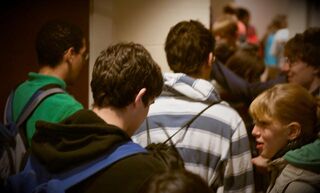 Photo: Juniors stand waiting to take the AP Language and Composition exam on the last day of AP Exams for the 2009-2010 school year. On August 16, College board announced their new scoring system in place for the 2010-2011 school year.

Photo: Juniors stand waiting to take the AP Language and Composition exam on the last day of AP Exams for the 2009-2010 school year. On August 16, College board announced their new scoring system in place for the 2010-2011 school year.  Photo courtesy of Colin Wiencek.

The College Board used formula scoring, in which points are deducted for incorrect answers, for all previous AP examinations. According to Jennifer Topiel, a College Board representative, research has confirmed that both formula scoring and rights scoring, in which no points are deducted for incorrect answers, are valid scoring procedures.

"The AP Program's change to rights scoring enables us to more efficiently make many changes to the AP Program at once," said Topiel. "Rights-only scoring, for example, will enable us to more easily compare difficulty from test version to test version, ensuring that all scores on all test forms can be compared to each other."

According to the College Board, the rigor and difficulty of the exam will not be affected and the same overall scoring system will be in use. AP students' performances on the multiple-choice and free-response sections will continue to be combined and converted into a final score of one through five."This change will not make AP exams any easier or harder for students," said Topiel. "The number of points needed to earn scores of five, four, three and two is, as always, based on how well students perform."

AP teachers and administrators were notified on Aug. 16 about the changes to the scoring; consultants leading AP workshops were notified earlier in the summer, before the scoring change was made public. All other information regarding AP tests has been updated to reflect the change in the scoring, according to College Board.