Blazers fight hard but are ultimately unable to pull through

Blair girls' varsity volleyball (6-5) faced the Magruder Colonels on Friday in a laborious game that resulted in a 3-0 loss for the Blazers. Although the Blazers fought hard, displaying some of the best teamwork so far this season, the still-undefeated Colonels cruised through the three-set game with scores of 25-14, 25-20 and 25-15.

From the start of the game, the Colonels established themselves as a dominating presence on the court. According to senior co-captain Julie Brice, "[The Colonels] are a well-coached team, and a very good team in general." The Magruder team demonstrated its superlative serving, as well as powerful defense and offense that showed off its well-coordinated teamwork. 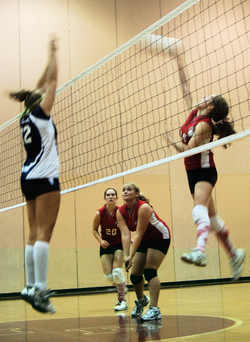 Photo: Sophomore Chloe Sheridan and senior Julie Brice stand ready for the ball as senior Olivia Bozik hits the ball across the court.

Photo: Sophomore Chloe Sheridan and senior Julie Brice stand ready for the ball as senior Olivia Bozik hits the ball across the court.

Although the Colonels unleashed its intimidating game, the Blazers responded with equal zeal. The two teams sparked rallies, exemplifying the fast reactions and strong hits of both teams, which usually lasted until Blair's missed balls ended the exchanges.

But Blazer misses and careless errors, in conjunction with fierce Colonel serves, racked up the score to 12-4 in favor of the Colonels. Although seniors Molly Martinez and co-captain Julie Brice established a solid block, the Blazer defense's slow reactions and misjudged distances only widened the score gap, even with the Colonels' overenthusiastic serves that soared out of bounds. A Blazer block that failed to get back into the air sealed the opening set loss for Blair with a score of 25-14.

The second set opened with an ace from Brice and a successful block by senior co-captain Olivia Bozik and Martinez, giving the Blazers a 2-0 lead. Unfortunately this slim lead was soon lost due to the Colonels' reflexive smashes that bewildered the Blair defense, and a Blair net fault brought the score to 8-5. However, the Colonels lost their focus, falling into a string of faults – clumsy serves, fumbled hits, a line fault and a carry fault – that pulled the Blazers ahead, 9-8.

The Blazers lost the lead quickly with an out-of-bounds serve, and the Colonels immediately pulled themselves back together for well-coordinated teamwork that left no holes in their defense. But with sophomore Kaiti Hague serving and Bozik and Martinez blocking, the Blazers held their ground despite a Colonel lead at 20-16. Clumsy hits from both sides of the net garnered points for both teams, but a botched Blazer hit ended the set with a 25-20 loss.

Despite the 3-0 loss, Coach Heather Amell felt that the game showed the Blair team's definite improvement. "Blocking was pretty good tonight," said Amell, but she cited positioning and blocking as skills the team still needs to work upon.

Similarly, Brice felt that the team needs to improve upon defense. "It killed us with Churchill and it killed us tonight," she said of covering off tips and blocks.

The varsity girls' volleyball team plays their next home game on Wednesday, Oct. 17 against Damascus at 6:30 p.m.