Comedian Stephen Colbert's "Colbert Nation" has joined the Vancouver Olympic festivities by funding the United States Speedskating team. Earlier in 2009 the team lost its largest sponsor, the Dutch bank DSB when it declared bankruptcy, leaving the team scrambling to raise $300,000. But luckily for U.S. speedskating, Colbert saw sponsoring the team as an opportunity to publicize the sport and his show, and of course to rub American athletic victory in the face of Canadians, whom he has dubbed "syrup-suckers" and "ice holes." In just six days, his viewers raised over $200,000. 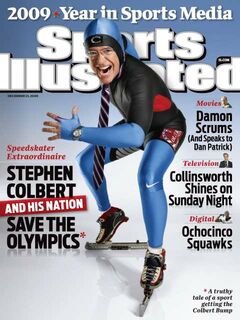 Meeting with Olympic Gold Medalist Dan Jansen and U.S. Speedskating Director Bob Crowley on his show, Colbert signed his way into the Vancouver Olympics. Since that night, he has voyaged into unprecedented comedic territory that deftly balances between fun and making fun, and speedskaters and winter athletes couldn't be more pleased.

The Winter Olympics are typically viewed less on American television compared to the Summer Olympics. However through his innocently arrogant character, Colbert has been successfully plugging the sport and the athletes' pre-game wins, while at the same time pointing out the Colbert Nation Logo stamped to the thighs of skaters. In addition to plugging the sport of speedskating, Colbert has featured himself trying other Olympic sports such as skeleton, bobsledding and curling after announcing that he was determined to make an Olympic team.

As Colbert pithily narrates his experience of "passing stones" with the curling team, some might argue that he is making a joke of serious athleticism. But anyone who sees him crammed into his red, skintight bobsled spandex would agree that Colbert himself is the biggest part of the joke. The extent of Colbert's impact on Olympic viewership remains to be seen, but the comedian has already succeeded by giving the athletes the money and the respect they deserve.