A meeting was held last Sunday at the Coffield Community Center in Silver Spring from 2 - 4 p.m. to solicit the public's suggestions for the new Silver Spring Library that will be constructed in Downtown Silver Spring. The discussion, led by Rita Gale, Public Services Administrator for Montgomery County Public Libraries, was the third in a series of public design meetings intended to receive feedback from the community. 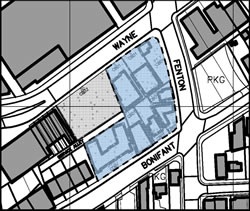 Photo: The new Silver Spring Library will be at the corner of Wayne Avenue and Fenton and Bonifant Streets in Downtown Silver Spring. Photo courtesy of Montgomery County Public Libraries.

Photo: The new Silver Spring Library will be at the corner of Wayne Avenue and Fenton and Bonifant Streets in Downtown Silver Spring. Photo courtesy of Montgomery County Public Libraries.

The proposed design, which will improve upon the second-oldest library in the county, would be at the corner of Wayne Avenue and Fenton and Bonifant streets. The 66,000-square-foot site will include the multi-story library, affordable housing units, retail and a station on the Purple Line, according to Gale.

The project, which is 10 years in the making, is still in its planning stages, as officials are uncertain about the site plan of the library or materials that will be included in it. No projected start or completion dates exist as of yet. "It's very difficult for us right now, here today, to say how long it will take to get through the various regulatory processes," Don Scheuerman, acting chief of the project management section in the county's division of building design and construction, said at the meeting. "It's a multiuse facility, so it's harder to tell," Gale added.

At the meeting, Silver Spring residents were quick to make their ideas heard. Proposals included separate areas for tutoring and a book drop at the Silver Spring Library Metro station to be included on the Purple Line. Becky Reeve, of the Silver Spring Friends of the Library asserted that spaciousness is essential in the design. "I think it's extremely important to have meeting room space for multiple purposes," she said. "We're really concerned that people have said that this land is too valuable for a library, but we need this. We want this library to be useable in the future."

Reeve mentioned that many residents are worried that the potential Purple Line station will overrun the library, using up much of the property available. "This is ridiculous, and it's a big concern," she said.

Residents also advocated for a separate teen area complete with a computer lab furnished with both PCs and Macs. "We want to make sure that when teens grow up, they will use the library as adults as well," Gale said. "We can't just go from children to adults."

Silver Spring Library Manager Daniel Beavin maintained that the need for a new library is obvious to the community. "We are convinced of the need for a much larger building and there are constraints to using the present site of the old library," he said. "This will be a truly urban library and needs to be located closer to the business district."

The amount of money available for the new library's construction is about $30 million, according to the Montgomery County budget for the 2009 fiscal year.

Earlier this month, representatives from the Silver Spring Library hosted a meeting in the Blair media center during both lunches to hear teen students' opinions about the library's new design. "One of the biggest complaints we have had was that we weren't listening to kids," Scheuerman said. "It's a mistake we made and we want to make sure it doesn't happen again."

Scheuerman and Beavin listened to ideas from a small group of Blazers about specific spaces, colors, book and music collections and technology needed in the new library. "We have an opportunity to do something great," Beavin said. "There will be limits to the budget eventually, but at this stage, it's really important that we think big."

Suggestions at the meeting included a music room, a flat-screen TV and a café. Junior Dorian Roberts asked that the library provide community service opportunities to Blair students. "Even though by the time the library's completed I'll be in college, it's still going to be an interesting outlet for me," Roberts said.

Another meeting was held Sept. 23 at Round House Education Center to discuss site analysis and constraints. During the discussion, the public was presented with the site plan for the new library. Many attendees advocated for the library being a separate facility instead of a part of the planned residential area, according to Beavin.

There will be two more public design meetings for the new Silver Spring Library throughout the fall: