A look into Blair’s preparation for the winter sports season 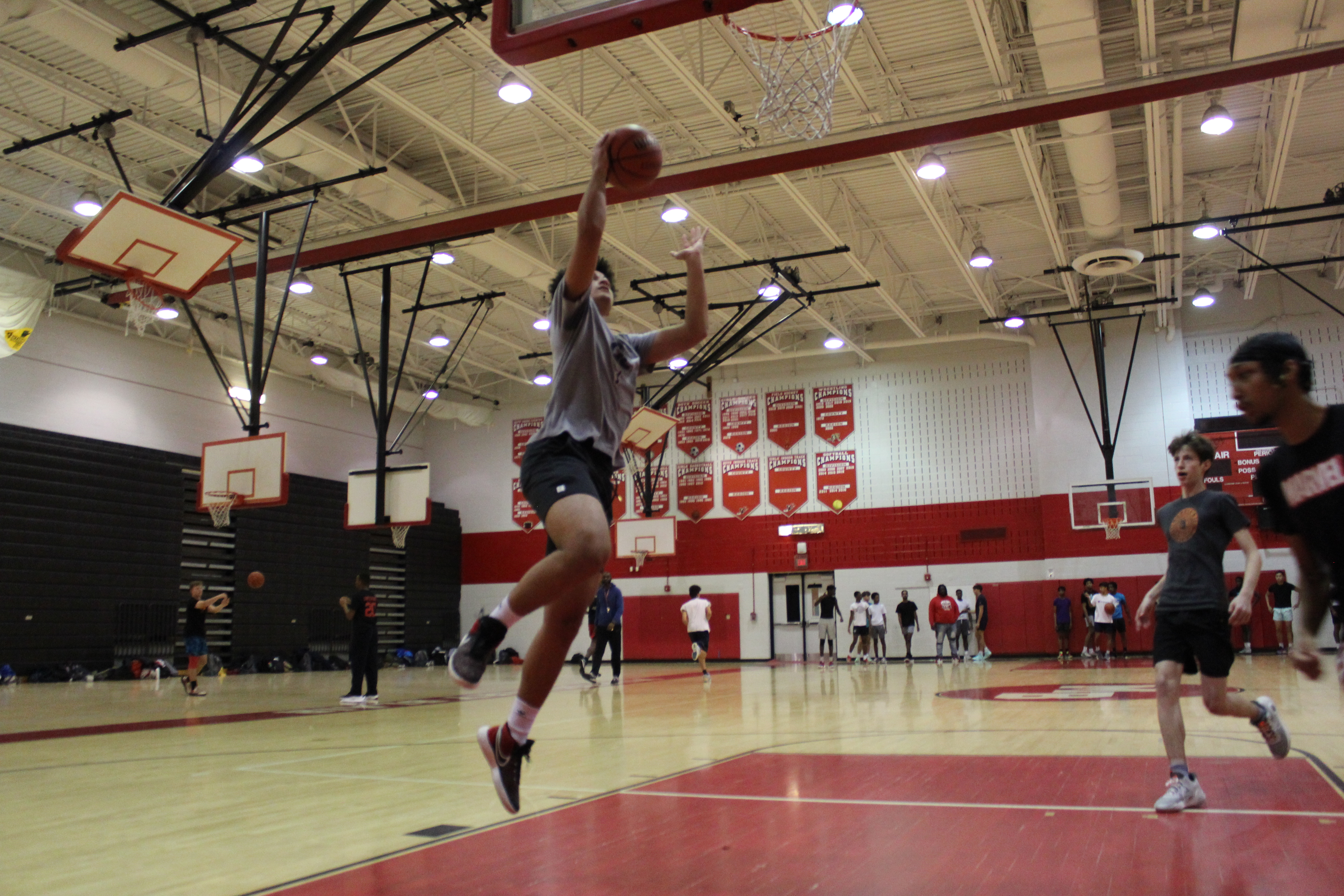 Photo: A player trying out for the Blair men's basketball rises up for a layup underneath the lights of the gymnasium.

A player trying out for the Blair men's basketball rises up for a layup underneath the lights of the gymnasium. Photo courtesy of Gabe Marra-Perrault.

﻿While many students were excited about several Blair fall sports teams advancing to state playoffs, other students had to focus and train for a new season of sports games and tournaments.

The winter athletic season includes basketball, wrestling, swimming, indoor track, bocce and competitive cheerleading. As of last school year, Blazers on many of these teams were regional champions and the co-ed bocce team even took home a Division I title.

Winning teams like these are the results of competitive tryouts. This year, Blair seeks to put together teams that are even stronger, boosting chances of victory. Student athletes were to be ready for the first day of tryouts on Nov. 15. Most sports conducted a 3-day minimum tryout process to evaluate each athlete and make final decisions and cuts. In addition to athletes, coaches and athletic staff also had to prepare and work hard to start the season off right.

As soon as the fall season started, Blair’s Athletic Director, Rita Boule, wasted no time in developing plans for the winter. “ She took care of practice schedules, game schedules, parental communication, coach readiness, and uniforms. “I'm always trying to be a season ahead,” Boule says.

For Coach Tony Mensah of the boys basketball team, the preparation for tryouts is all about evaluation of returning players. Team conditioning is a great way for student athletes to get back in shape before the season starts, especially if they have been resting during the off-season.

Those participating in team conditioning are also sometimes evaluated individually by Mensah. “[We] work on shooting, work on ball handling…work on a lot of the small things so that when we get to the season, we don't have to work on the small things anymore we can focus on the bigger picture,” Mensah says.

The coach’s duties are not solely to do with athletics, however. Mensah is also responsible for making sure those interested in playing on the varsity team are correctly registered. Student athletes can only begin the tryout process once they have done so.

All student athletes participating in the fall, winter and spring seasons must register online for tryouts of their desired team for that season on ParentVue. After parents create an account, they must fill out various forms including medical, transportation, and emergency contact information. If a student is under 18, a parent-signed physical form completed by a physician must be turned into Boule.

For junior wrestler McKinley Jovanovic, coming into tryouts with determination is the most important factor in success. “A lot of it is honestly hard-work, because if you’re consistently showing every practice that you are working hard…that chance of you being on the team is high,” Jovanovic said.

Like Mensah, most coaches use an evaluation system to assess the skills and attributes that each student athlete has to offer. This system accounts for factors such as individual skills, ability to condition and knowledge of the game. These types of evaluations are given to every player, new and returning.

For basketball, different drills were used to assess different kinds of skills, and players were evaluated on a scale of 1-5 for each. Overall shape and stamina was measured with a mile run and a certain time given to beat depending on the athleticism of each player. Players who did not beat their assigned time had to run everyday before practice until they made their time.

Quick shooting skills allowed coaches to observe shot form, ability and range. There were similar drills conducted to assess defense, rebounding, overall basketball knowledge and coachability. Coaches also watched and gave ratings for each player after a scrimmage to see how well they perform in live game situations. 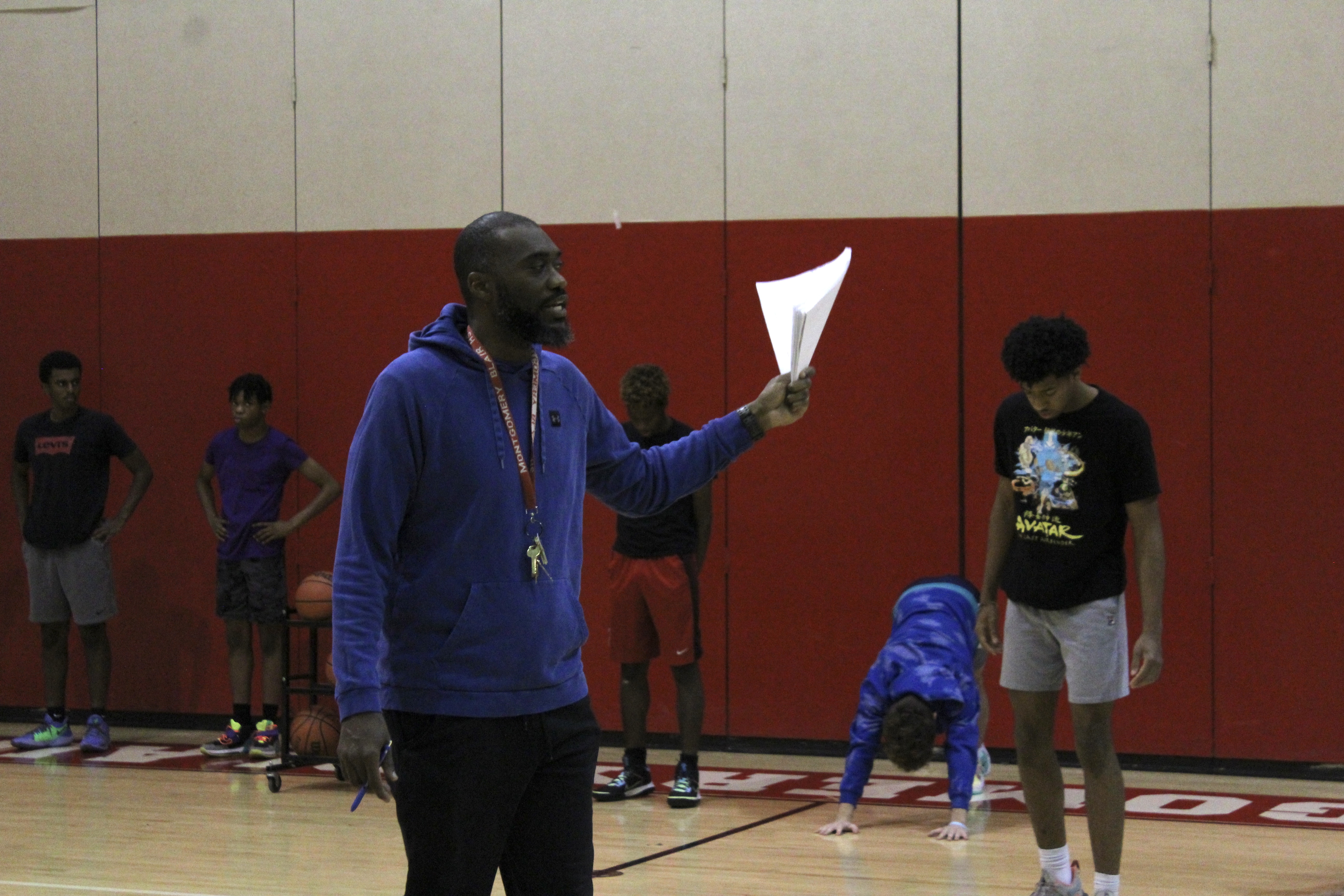 However, deciding who ends up on the team is not as simple as just choosing the best individual players. Mensah has to take into account how players can be put together into a functional group. He is required to think about which athletes can work best in an assigned position. “[I] evaluate everybody and say, who are the 15 best players? We have four positions on the basketball floor that we have to account for. So if all 15 of my best players are point guards, I can't have 15 point guards,” Mensah says.

At the end of each day, each players’ scores were added up to receive a final score by the coaches. The coaches then reviewed scores and player performance to make their decisions.

While training and tryouts are important, Jovanovic notes that it is critical to come into the season with a positive attitude and team spirit. For wrestling, she emphasizes connecting together as a team. “We’re serious, we’re locked in. But we also joke around a lot and you know, we care for each other as a team and we support each other…So I’m ready for that and excited for the season,” Jovanovic says.

As tryouts ended recently, all winter sports teams are beginning their season with determination. Good luck to all athletes as they continue to advance throughout the winter season!


Katie Phung. Hi, I'm Katie! (she/her) I'm on the writing and photo staff. I am a huge fan of Kit Connor, if you bring it up to me it will probably be another 30 minutes of just me talking about him. More »