Complexities in the making of "Complex People"

Dr. Daryl Howard is not only a counselor at Blair, he's a published author. In his new book "Complex People: Insights at the Intersection of Black Culture and American Social Life" he tackles various intricate aspects of contemporary black culture and gender in a series of essays. The three years of work poured into the book are derived from many more years of Howard's experiences as an educator, father, and black man. 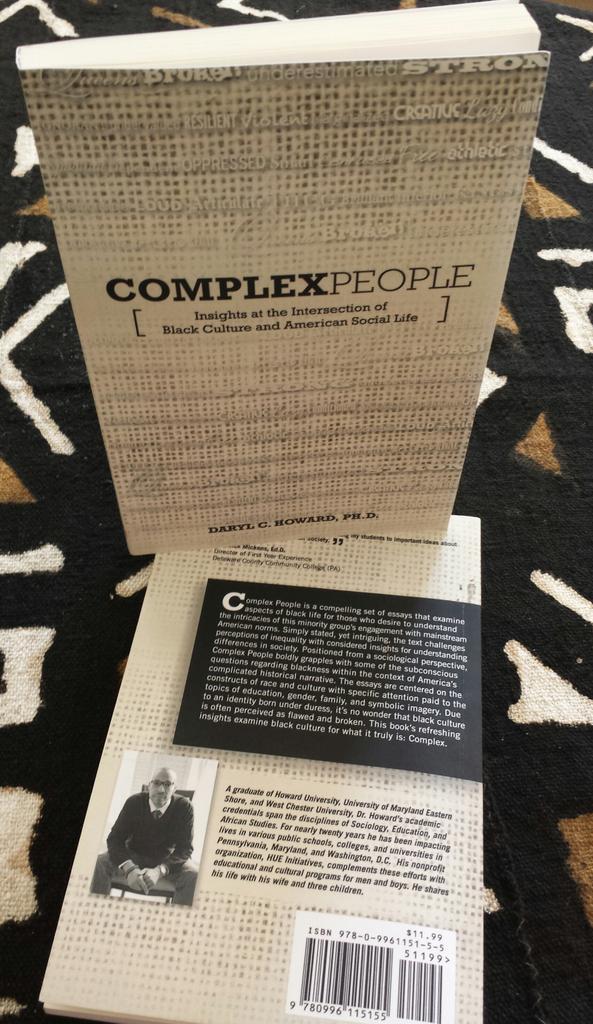 According to Howard, "Complex People" is a detailed composite of black culture and gender with an ultimate goal of educating his readers and helping them better understand black people. "I put together a number of essays that speak to culture and speak to the importance of appropriately contextualizing culture," Howard says, "I look at education, at the family, gender roles, music and how all those things impact the way a particular group of people is seen and how that particular group of people see the world." In his analysis, Howard pulls not only from his observations, but his own experiences as a counselor at Blair and as a sociology teacher at Prince Georges County Community college. "My background is in sociology so a lot of what I have learned about throughout my education as a student as well as an educator has been trying to understand the behavior, the language, and essentially the culture of people in particular black Americans," Howard says. Howard's decision to write a book stemmed not only from his love of writing, but the unwritten requirement that those with Doctorates must continue sharing their ideas. "I have always enjoyed writing and as a Ph.D. its almost an unwritten requirement to publish," Howard says, "as the old saying goes, 'Publish or Perish.'"

As a teacher, Howard decided to aim a portion of his book at other educators. "In the state of Maryland there are only 3 percent that are black male," Howard says, "We can probably agree there are more than 3 percent teen black boys in the state of Maryland. So when you have educators who have a different cultural background, often times it provides for some of the miscommunication that exists in classrooms." In order to bridge the gap in communication, Howard asserts that educators should attain a level of "cultural competency". This includes educators learning about groups of people in relation to the world, in order to understand different demographics more. This focus on culture influenced the cover design of his book. The cover looks as if it has a burlap texture which is emblematic of the clothing and bedding of black slaves in America. The words on the cover, are both positive and negative descriptors which represent words that have consistently been used to describe black people by others and by those in the black community. It is an element Howard added himself. "Just as the title suggests, without a full understanding of a person's culture and a person's orientation to the world you may not know why they do the things they do," Howard asserts, "It's easy to watch TV and go on the internet and come up with a bunch of generalizations and assumptions and that's a problem in our society."

Many of the concerns Howard addresses in respect to race and gender inequality have also been issues he has addressed not only in his book, but in the community as well. In 2007, Howard started a nonprofit called Howard Urban Education Initiatives (HUE Initiatives) that provides summer enrichment programs for black teen boys. "We do college and career awareness, how to change a car tire, CPR training and colleges visits," Howard says, "A lot of things some students may not have the opportunity or resources to adequately prepare them for whatever that next stage is in their life," Along with his organization Howard participates in a number of talks and workshops on the black community and gender inequality. Recently, Howard conducted workshops with women-only groups speaking on women's issues. "It is always really interesting because they are like hold on you're talking about- the patriarchy, the subjugation of women and feminism and you're a guy," Howard laughs, So we have had some good times with that." His involvement in the community, as well as personal experience, has turned into a muse of sorts in his writing. "It's not until I really started grappling with these ideas and teaching these ideas and after having 3 daughters which made it seem all the more pervasive." Howard acknowledges.

Writer's block, the dogged beast many authors face, was not an issue for Howard and he would often wake up at 4 a.m to write before work. The process of writing was also a transforming experience for Howard as he reflected on lectures, experiences, family and observations. "The first few are a little slower as you don't feel the intensity of the ideas or the material in the early chapters as much as you do when the book goes on," Howard says, "Maybe I became more assertive and let my guard down as the book came together." "Complex People" was independently published through Howard's non-profit, HUE initiatives and will be available on Amazon. Independent publishing allowed Howard to exercise a large amount of control over his work compared to a normal publishing route. "I hired a team of editors and a designer and found it was better for just managing time I was able to commit. Also I get all of the royalties," Howard laughs. Howard hopes that after reading his book, the audience, regardless of race or gender will emerge with a greater understanding of the nuances in the complex world we live in. Howard says, "We have to do more than turn on the TV or go on the internet if want to be truly aware and conscious culture."