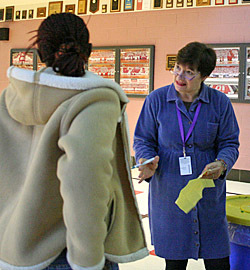 On Jan. 11, the administration and the SGA reached a formal agreement on the new hall sweeps policy, which mandates that late students caught in the hallways be given detention.

Under the new terms negotiated between the SGA and ninth-grade administrator James Short, late students may attend academic support during lunch or after school instead of serving a 45-minute after-school detention. Students must get their teachers to sign their detention slips and bring it to their administrator's office to be excused.

The agreement also calls for cooperation between the SGA and the administration to develop a formal version of the hall policy, including a process for students to appeal detentions.

SGA President Eric Hysen hopes to reduce the punishment for students who are not often tardy. "We don't want it to punish students who are occasionally late, but those who are consistently late," he said. "We need to make this distinction."

Hysen will work with Short and Business Manager James Funk to finalize the policy and distribute a written version to students in the coming weeks.

The compromise between the SGA and the administration comes after Principal Phillip Gainous rejected Hysen's request that the policy be suspended. "Our key objection was that student input didn't occur before the policy was put in place," Hysen said.

Gainous maintained that detention has always been the penalty for late students. He also said that no students were consulted because the policy was an emergency decision made by administrators to prevent students from losing credit because of tardiness.

Hysen considered appealing Gainous's decision to the superintendent, but because he reached a compromise with the administration, he decided to drop the case. "The administration does agree that students should have been consulted," Hysen said. "When we started talking, we all agreed on the same things " that students need to get to class on time and that the punishments can be too harsh."

Hysen and the administration both agree that the policy has reduced student tardiness since it took effect Dec. 11. "In the morning, you can really see a difference around the SAC," said Assistant Principal Linda Wanner. "It's woken the students up."

Security guard Cedric Boatman has witnessed a dramatic drop in the number of tardy students. "There's definitely been a down-swing," he said. "The halls have been cleared much faster. It's a good model for the school."

Wanner believes that both students and staff have benefited from tough enforcement. "It's helped the morale of the staff. Teachers always want students on time, and even one minute late can be demoralizing," she said.

As for students, Wanner expected that the number of students who lost credit because of tardiness would decline for first semester. Approximately 250 students lost credit last semester.

Kathy Jee. Kathy Jee is a junior in the Magnet Program and is excited to be a part of the wonderful Silver Chips staff. When not in school, she enjoys playing basketball and obsessing over "American Idol." She is looking forward to another stressful year of school... More »