Legendary University of Tennessee women's basketball coach Pat Summitt has been diagnosed with symptoms of early-onset Alzheimer's disease. As the all-time winningest coach in NCAA history, Summitt has been a pioneer and role model for not only women athletes, but all women throughout her career as a college coach. Despite the diagnosis, she plans to continue coaching the Lady Volunteers for as long as she possibly can. 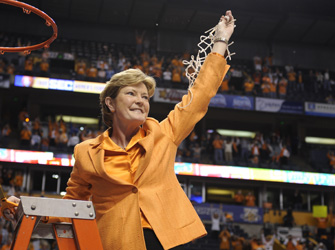 Photo: Pat Summitt has an overall coaching record of 1071–199

Photo: Pat Summitt has an overall coaching record of 1071–199

Over the course of her illustrious career, Summit, 59, has led the Lady Vols to eight National College Athletic Association (NCAA) Division I Women's Basketball Championships. She is the only men's or women's basketball coach in NCAA history to reach 1,000 wins with an overall coaching record of 1071–199. During her 36 year coaching career, Summitt has been named one of the most influential figures in the history of college basketball due to her coaching success.

After months of memory lapses, Summitt visited the Mayo Clinic in Rochester, Minn., where doctors diagnosed her with a rare form of Alzheimer's-type dementia (AD) that strikes only five percent of people younger than 60. According to the Mayo Clinic, Alzheimer's-type dementia is a degenerative disease of the nervous system that prevents its victims from learning new information and recalling recent events. The cause of AD is unknown, but it commonly occurs in families with a history of the disease, as it does in the case with Summitt.

Summitt told the Washington Post that she noticed the first signs of her disease when she had trouble completing her daily routine. "I just felt something was different,” she said. "And at the time I didn't know what I was dealing with. But I can remember trying to coach and trying to figure out schemes and whatever and it just wasn't coming to me, like, I would typically say, ‘we're gonna do this, and run that.' And it probably caused me to second-guess."

In an interview with American Broadcasting Company (ABC) News, Summitt revealed her thoughts on her early diagnosis. "Obviously, I realize I may have some limitations with this condition, since there will be some good days and some bad days," she said. "For that reason, I will be relying on my outstanding coaching staff like never before."

With the Lady Volunteers' 2011-2012 season starting at the beginning of November, Summitt will have a lot of tough battles to fight both on and off the court. In a statement made to the Washington Post, Summitt expressed her desire to continue to coach and not let the disease get the best of her. "There is no pity party, and I'll make sure of that,” she said. "I've got a great staff and great support system, and I'm going to stick my neck out and do what I always do.”