Conscientious Blazers are vegging out

Pizza. Ice cream. Hamburgers. Chocolate chip cookies. Ask just about anyone to name their favorite things to eat, and at least one of these mouth-watering dishes is sure to come to mind.

But for vegans, all of these foods are taboo.

Traditionally, vegans abstain from eating not only meat and fish, as traditional vegetarians do, but also reject all animal products, including dairy products and eggs. Some vegans also give up gelatin (an ingredient in treats like Jell-O, marshmallows and gummy worms) and honey.

According to Erik Marcus, publisher of the vegan advocacy Web site Vegan.com, approximately one percent of all Americans identify as vegan. As obesity levels and awareness of the environmental impact of our diets continue to grow, the challenge of eating a healthy, ethical and sustainable diet rises to the forefront of America's consciousness. Vegan Blazers meet the daunting challenge by following a healthful, conscious alternative to the typically fatty, pollutive American diet overloaded with red meat and dairy.

There are more types of vegan diets than there are hard-to-pronounce ingredients in a veggie burger. Many vegans tend to adapt what they eat to their personal preferences and necessities rather than following a hard-line regimen: Some vegans eliminate absolutely all animal products from their diets, while others are more flexible. 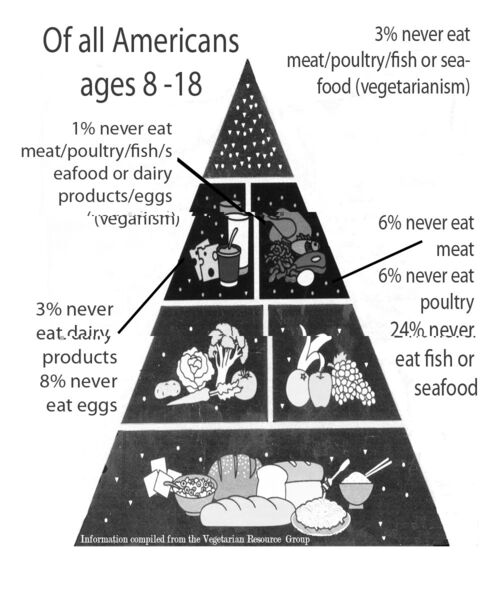 Photo:
Senior Diane Adamson has adhered to the traditional definition of veganism for nearly a year: she does not eat meat, fish or dairy. But the restrictions haven't deferred her passion for good food - Adamson, who enjoys a good meal, has found several new dishes to replace the non-vegan meals she used to eat. Her favorites are Cuban black beans, vegan cupcakes and muffins. She says both are so tasty that it's difficult to taste the difference from their non-vegan counterparts. "If I don't tell my friends [the food is] vegan, they don't usually notice," she says.

Though vegan diets can be more healthful than meat-eating diets, following such a restrictive diet means that vegans must exercise caution in order to get all the necessary nutrients, says Goulda Downer, president of Metroplex Health and Nutrition Services in Washington, D.C. Downer stresses the special attention vegans must pay to their intake of iron and vitamin B12, since these nutrients are lacking in typical vegan foods. Supplemental pills and vitamins are often a very important aspect of vegan diets. But as long as one maintains a balanced diet by eating a wide variety of foods throughout the day, eliminating animal products can be beneficial, Downer says. A vegan diet, with all the necessary nutrients, can lead to lower blood pressure, a healthy weight and increased energy, she adds.

For many vegans, these health benefits are the primary reason for their decision to go vegan. According to Marcus, vegans are less likely than omnivores to be overweight, and may have lower levels of heart disease, diabetes and cancer. On top of that, vegan diets tend to be richer in fiber, vitamins, antioxidants and other nutrients.

Sophomore Israel Dempsey has been a vegan for over eight years and cites health as the primary factor for her decision, saying her diet is good for her immune system and prevents weight gain. And the evidence is on her side: according to the People for the Ethical Treatment of Animals (PETA) Web site, vegans are less likely to get everyday diseases like the flu and are less likely to be obese. Dempsey rarely has to go to the doctor and believes that is an indication of her good health and diet. According to Marta Holmberg, a coordinator for Peta2, an offshoot of PETA, since vegan diets are more likely to be lower in fat and calories, vegans, on average, weigh less than omnivores.

Another factor in Dempsey's decision was her family: Her mother has been a vegan since adolescence, and the rest of her family is vegetarian. Whereas other teenage vegans are often subjected to eye-rolls and snide remarks from their parents, Dempsey finds support and understanding at home, as well freedom from the temptation of non-vegan foods. 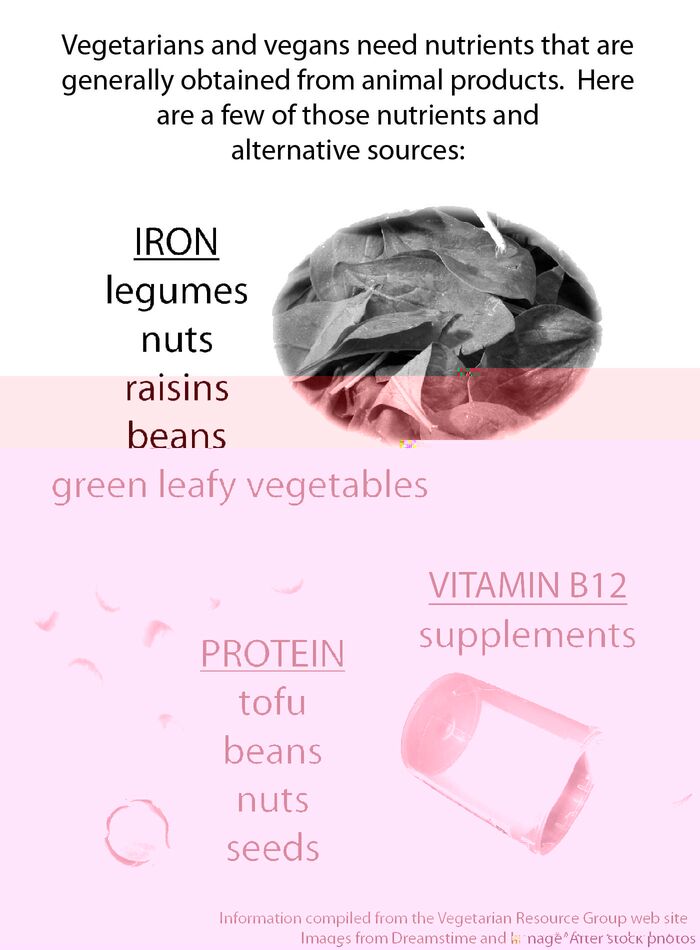 Photo:
Familial customs also played a role in determining junior Emili Malatesta's diet. Malatesta's family converted to the Orthodox Christian Church eight years ago, and since then she has had to fast on designated holy days throughout the year as a way to reach purification, including every Wednesday and Friday as well as the month-long periods of Lent and Advent. For what amounts to about half of the year, she says, meat, dairy and fish products are off-limits, although she occasionally breaks her fast. "I love meat, so it's a little hard," she says, laughing.

The ethics of eating meat also tend to play a major role in the decision to follow a vegan diet, as they did for Adamson. The treatment of animals in factory farms and slaughterhouses made her question her old eating habits. Chickens raised for their meat, for example, are confined to small, disease-ridden cages and subjected to treatments such as beak removal without pain relief, according to Holmberg. When the time comes for them to be killed, the chickens are often boiled alive.

Though Adamson was previously aware that animals suffered such cruelty, it wasn't until recently that she took a stand against it. "It was something I had always known but tried not to think about," she says. "I would eat something . . . and try not to think of the implications of what I was eating."

But after looking on the Internet for more information about the mistreatment of animals, Adamson's guilt finally caught up with her, so she decided to do what she could to make a difference: She went vegan.

Up to the challenge

No matter their motivation, however, most vegans face mitigating social circumstances that affect their diets. Adamson says that sometimes she has to eat food with meat or dairy, no matter her personal preference. In social situations, she explains, it would be rude as well as conspicuous to refuse the food her hosts offer. "Otherwise, I'll just be eating a salad with no dressing, and people would notice that," she says. However, Adamson says she will eat non-vegan meals that would otherwise be thrown out. There's no point to her diet, she says, if she is just wasting food.

For other vegans, adhering to the diet isn't quite so challenging. Dempsey has been vegan for so long, she hardly remembers the taste of meat or dairy, making it easier to say no. "Other people tell me I must miss those foods so much, but I can't miss what I don't know," she says.
No matter the difficulties, most vegans agree that their diet pays off in the end. Malatesta says that the challenges she faces by sacrificing some of her favorite foods have helped her develop her important skills. Being able to say no to meat and dairy, she says, has helped her establish self-control in other aspects of her life.

For Adamson, the rewards are more internal: her vegan diet has soothed her conscience. "I feel better because my beliefs are aligned with my actions," she says. "I have a strong sense of well-being now."

Whether the elimination of animal products helps their conscience or their health, vegan Blazers agree that their sacrifices are worthwhile. Through their diets, these Blazers are choosing to improve their personal health, and still doing their part to make a difference in the world.