[WARNING: This content contains spoilers. Do not read on if you do not want to know the ending of the episode.]

Viewership has been rapidly declining for the once-hit show "Glee." Many previous fans of the series attribute this to the lack of development of some storylines, sudden abandonment of others and a less-than-ideal handling of major issues this past season (viewers only need to recall Marley's eating disorder storyline to cringe at the way "Glee" has recently covered certain topics).

Because of this, when last Thursday's episode "Shooting Star" featured a school shooting, there was predictably an enormous amount of uproar that was only magnified by the still-fresh memory of the tragic elementary school shooting in Newtown, Conn. However, while not without its faults, the episode approached the topic of gun violence with surprising grace and ultimately had something worthwhile to say.

The episode begins with what appears to be a normal day at McKinley High, complete with relationship drama and several New Directions songs. Suddenly, while the students are in the choir room, they hear two gunshots. Tension builds as the students hide and everyone wonders where the shooter is, until a Special Weapons and Tactics (SWAT) team finally announces the "all-clear." Later, Sue admits that the gun was hers and Principal Figgins fires her. Only at the end is it revealed that Sue was covering for Becky, who brought the gun to school because of her fear of graduating and facing the real world and accidentally set it off while confessing this to Sue. 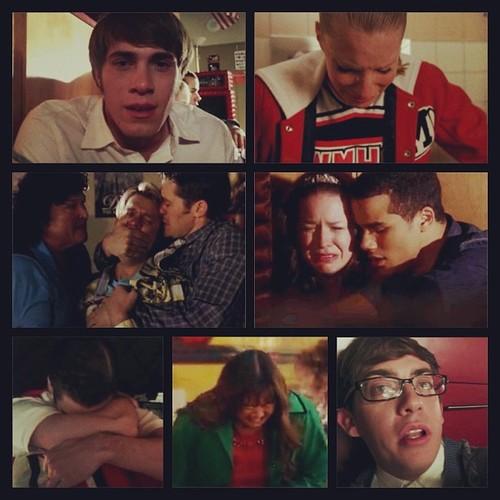 The large amount of controversy is understandable, particularly because it seems suspiciously as though the show is using this painful topic to "jump the shark" and gain back some ratings. This is coupled with the fact that the Newtown shooting was only four months away, making the episode's subject matter a still very sensitive topic for many. However, it is because of the recency of this massacre that it is more important than ever to educate youth about the dangers of gun violence, which may be more safely and effectively taken in through a medium like a TV show seen by many young viewers. Newtown is not home to the first deadly school shooting and its victims are part of a continuously growing list. Whatever the network's ulterior motives, "Shooting Star" gives a message that is ultimately important to hear.

The episode does not glorify school shootings. Unlike the plots of many issue-based high school dramas before "Glee" (I'm looking at you, "Degrassi"), none of the characters had to die or get injured for the story to have an impact. After the gunshots are fired, Mr. Schuester and the glee club members do not make attempts at heroism in typical TV-drama fashion but rather lock the doors, hide and remain (mostly) quiet, exemplifying to viewers what is actually supposed to be done during a real-life shooting.

Instead of glorification, the show provides commentary on the importance of gun control to prevent such violence. At one point, Sue explains her motive by lamenting inattentive parents, the fact that the "safety net of the public mental health system is gone" and gun control opponents' "readily available arsenals" as reasons for greater violence. Becky's fear contributing to stealing her dad's gun and bringing it to school, almost killing others in the process, highlights the negative consequences of these current norms. By using a fictional situation, "Glee" humanizes and puts into perspective a controversial viewpoint.

This is not to say that "Shooting Star" did not have its flaws. In fact, there were enough to constitute a blog of their own. Ultimately, though, the episode addressed gun violence in a convincing manner and arguably at just the right time: when violence continues to escalate and the gun control debate heats up.