Almost five years ago, sophomore Eni Bajrami left her childhood home in Greece and journeyed with her family overseas to a country she had only heard of in stories - the U.S. Like any immigrant, Bajrami had some initial anxiety about starting a new life in a completely foreign land. She knew nothing about what the future would hold for the prosperity of herself and her family.

Photo:
Although originally from Albania, Eni Bajrami's parents moved to Greece before their daughter was born. With a population of just over 10 million, Greece is renowned for its mythology and creation of the popular Olympic Games. But its modern history is overshadowed by its turbulent past.

Greece has been plagued by political conflict and economic turmoil throughout its history. Some of that conflict is still prevalent today, which is part of the reason for the Bajrami family's departure.
But once she arrived, to her surprise, Eni Bajrami found that the U.S. is relatively similar to Greece culturally, which has allowed her to swiftly assimilate to her new life nearly 5,000 miles away from her home country.

The main reason the Bajrami family packed up and moved to the U.S. in spite of the fact that they knew almost noone was the prospect of economic opportunity. "There are more job opportunities here," she says, "Even if you finish college there, you still might not get a good job." In Greece, the economic situation has continued to deteriorate. The poor economic situation of many Greek citizens was reflected in extensive riots 2008.

The Greek Embassy's press attaché Aris Papageorgiou affirms that there is still much room for improvement in the Greek economy, but that the country has high hopes for improvement now that it is a part of the European Union. "Greece is one of the poorest countries in the European Union…we had many years of high growth and now we have a very small recession that we hope to reverse in coming years," he says.

This difference between the two locations has aided Bajrami in her adjustment to American life because her family has been able to maintain a more stable lifestyle.

Unlike most immigrants to the U.S., Bajrami and her family were not welcomed into the U.S. by a large population from their homeland. In fact, they knew a mere three Greeks in their newfound foreign home. Though community outlets such as Greek Orthodox churches do exist, in general, there is not a large Greek population in the Washington, D.C., area.

Although there are students of Greek ethnicity at Blair, Bajrami says she doesn't know any other students who have lived in the distant country. However, Bajrami was still able to assimilate more smoothly than most immigrants even without population connections.

In Greece, the school hours are shorter and brief recesses are held every few hours, which Bajrami says helped her to focus in the classroom. Schools in Greece also tend to be smaller, which she says made it more difficult to become accustomed to Blair's size. 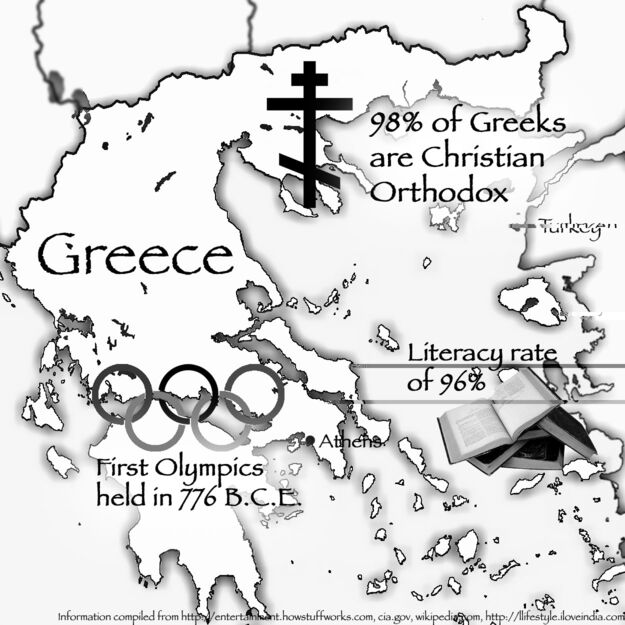 Photo:
Unlike in the U.S., almost all education is provided by the public, not private, school system according to Papageorgiou. Private schools and universities do exist, but public schools have many more resources, he says.

Despite these differences in structure between the respective educational systems, the learning aspects are similar. Bajrami says that the subjects she focused on in her Greek school were basically the same as in the schools here. This allowed for an easy transition from between schools, once she got used to the relatively minor structural changes, because she already possessed the knowledge required to begin her American schooling where she left off in Greece.

Bajrami cites the religious similarities between the countries as another part of the reason for her quick assimilation to American life. Ninety eight percent of Greek citizens are Greek Orthodox, according to the CIA's, World Factbook and confirmed by Papageorgiou. Likewise, over three quarters of the U.S. population is Christian, according to the U.S. Census Bureau.

Both Papageorgiou and Bajrami acknowledge that due to the large influence of Christianity, the most widely celebrated holidays in Greece are Easter and Christmas, which are also major holidays in the U.S. Papageorgiou says that the only main cultural difference is increased levels of religious activism in Greece, compared to the U.S. This cultural similarity allowed Bajrami to relate to her new American peers, despite her differences in background, and start to fit in to American life.

The language barrier, a common hindrance to American assimilation, did pose a problem to Bajrami's smooth transition. Even though she came here with only limited knowledge of the English language, she soon picked it up from being immersed in school and with friends. "I learned English in school there, but it was much easier to learn when we came here just from being at school and being around people that speak English 24/7," she says.

Bajrami was also comforted upon arrival in the U.S. by similarities in her home location in both Greece and the U.S. "We lived in the city in both countries," she says.

Bajrami says that the transition has been more rocky for her family; even after five years, her parents still do not speak fluent English.

After overcoming all the initial challenges that accompany moving away from home, Bajrami says that she does not think she will consider moving back to Greece in the future. "I'm good here, now I'm used to living in the U.S.," she says, adding that she hasn't even visited Greece since her departure.

Despite the distance between her current life and her childhood homeland, Bajrami believes that her Greek ethnicity will always be an integral part of her identity. "My Greek background is always going to be there and be part of me," she says.