Construction scheduled to begin in 2014

The Montgomery County Council unanimously approved funding for the North Four Corners Park renovation and expansion project on Tuesday. Because construction is scheduled to begin in 2014, the project will be reviewed by the Council every two years, but will likely proceed, according to Design Section Supervisor for the Department of Parks Patricia McManus. 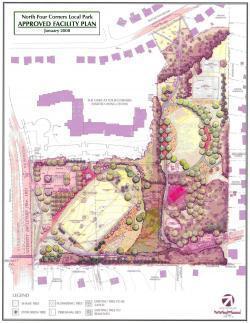 After the Council's Planning, Housing and Economic Development (PHED) subcommittee voted 3-0 for the project on Feb. 25, the Maryland-National Capital Park and Planning Commission (M-NCPPC) presented the proposal to the County Council to receive funding. McManus said that the current estimate for the total cost is around $5,055,000.

Since the M-NCPPC starts projects based on the order of approval by the County Council, they will begin the design for the North Four Corners Park project in 2012, according to McManus. The M-NCPPC will need to obtain construction permits and create a detailed design plan before starting construction in 2014. "We're only about 30 percent completed now but we need to get to 100 percent before we start building," she said.

As the County Council reviews M-NCPPC's projects every two years, opponents of the project will still have the opportunity to voice their opinions. But according to McManus, few projects have been halted in the review. "Usually, once they're in the program, they're there," she said.

The proposal had passed through the Montgomery County Planning board on Jan. 31