Discussion was met with low turnout

On Wednesday, the Montgomery County Council held its third annual Town Hall Meeting for Students in an effort to receive input and commentary from Montgomery County Public Schools (MCPS) youth at the Council Office Building in Rockville, Md. All nine council members, including Council President Roger Berliner, attended the meeting and responded to student questions. The event was broadcast live on the County Cable Montgomery (CCM) television network. 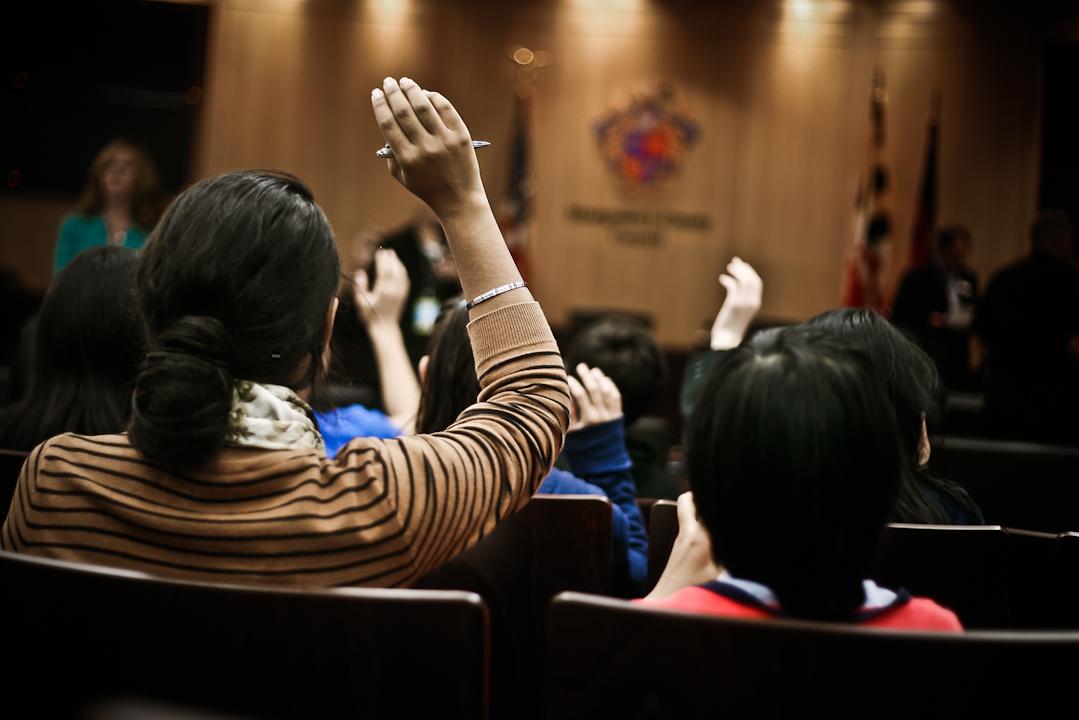 Although the meeting was intended for elementary, middle and high school students, there were a few college students in attendance, specifically from Montgomery College (MC). MC students addressed issues including dangerous transportation and the high cost to commute from Wheaton to Rockville on Metro trains.

Other topics that high and middle schoolers discussed included Superintendent Joshua Starr's technology plan, which aims to bring Promethean boards to every elementary school classroom, as well as the Shady Grove bus depot and maintenance relocation. A group of six students from Burtonsville Elementary School mentioned the need for new jobs and businesses in eastern Montgomery County.

Martha Sanchez, a senior at John F. Kennedy High School, asked about the academic achievement gap and preparing minority students for college. The response from Nancy Navarro, the Council Vice President and representative for District 4, detailed the urgency and importance of narrowing the achievement gap. "By 2050, 120 million Americans will be Latino. We should help minority students not just because it's the right thing to do, but because the socioeconomic future of this country relies on them," Navarro said.

Many attendees believed that the council members should have discussed the Shady Grove bus depot maintenance and relocation further. "We should have discussed [it] in terms of what happens there. It's a main issue concerning schools because it would cause more traffic at schools," Nathan Poland, a sophomore at Richard Montgomery High School, said.

Overall, the number of students in attendance, about 100, was a significant decrease from the past two years, when the attendance rates were over 400. Valerie Ervin (D-District 5) believes that this was due to a lack of popular topics that are well-known among students. "We were really surprised the turnout wasn't bigger. Last year we discussed curfew but this year there were no topics like that," she said.

Host Susan Kenedy, a producer for the County television station, kept track of questions and comments from attending students. Publicity prior to the event also encouraged Twitter users watching the event to tweet questions, tagging the questions #mocoyouth. However, lack of tweets forced Kenedy to talk solely with students at the meeting and read only one emailed question.

Sophomore Christina McCann believes that the Council's outreach to their younger constituents through social media was unsuccessful because the council members evaded certain topics. "They encouraged us a lot to reach out to them at the meeting. However, they avoided a lot of the questions and focused on political correctness, since it was live on TV," she said.