The three members of the Montgomery County Council Planning Housing and Economic Development (PHED) subcommittee voted unanimously on Monday in support of renovating and expanding the existing North Four Corners Park. The Montgomery County Planning board approved the proposal on Jan. 31, and the full County Council will review the project for funding in March or April, according to Design Section Supervisor for the Department of Parks Patricia McManus.

The project also includes the construction of a new soccer field on the undeveloped land, the conversion of the old soccer field in the current park to a park with landscaped areas and the renovation of the existing playground and paths.

Because of debate surrounding the project, the M-NCPPC has changed plans numerous times since the introduction of the first proposal in 1996. Thus far, the project has gone before the Montgomery County Planning Board three times, twice to the PHED subcommittee twice and once to the County Council. The original design called for two new soccer fields but after review by the County Council in 2005 and the Planning Board in 2007, M-NCPPC produced alternative plans with no new soccer fields and one new soccer field.

Many local residents oppose the project because of the effort needed to level the undeveloped area for a soccer field. Northwood-Four Corners Civic Association president Carole Barth said that it will take too much effort to bulldoze the hilly site for a field, especially when there are flatter areas in which to build a soccer park. "It doesn't make sense when we don't have lot of money in the budget," she said. 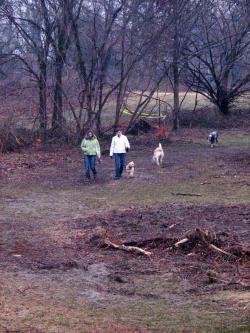 Photo: The North Four Corners Park and the land around it is a favorite place for neighborhood dog walkers.

Photo: The North Four Corners Park and the land around it is a favorite place for neighborhood dog walkers.

In addition, Barth stated that construction will "destroy the character and natural beauty of the site." Instead, she proposed that the undeveloped land be turned into an environmentally-themed park. "That would be a much better use for it," Barth said.

But McManus noted that many people have specifically asked for more field space in the park. "Park users and soccer players from Silver Spring, Takoma Park and the Colesville/White Oak area wrote many letters asking for two fields to be included in the park," she said.

McManus also stated that the park is classified as a "local park," meaning it should serve a broad area including Silver Spring and Takoma Park instead of just its neighborhood. "We're hoping to achieve a park that meets the needs of the area," she said.

Built in the 1950s, the current North Four Corners Park has undergone renovations such as the replacement of the playground and the re-pavement of the tennis and basketball courts every 15 to 20 years, according to McManus. M-NCPPC acquired the six acres of land in 1998 for $1.25 million, according to Department of Parks Landscape Architect Heidi Sussman.

If funding is approved by the County Council, construction will start in 2014. Total costs are currently estimated to be $5,055,000, according to McManus.

The voting members of the PHED sub-committee were Nancy Floreen, Marc Elrich and Council president Mike Knapp. Knapp filled in for the late Marilyn Praisner, who died on Feb. 1.