Leggett's proposal originally aimed to freeze the Kids Ride Free program, which was enacted with the help of Blair students in 2000 to exempt Montgomery County students from the $1.25 Ride On bus fee (and the $1.35 Metrobus fee on select routes) between 2 and 7 p.m. on weekdays. Leggett planned to implement a three-month suspension beginning April 1, an idea that stirred unnecessary controversy. 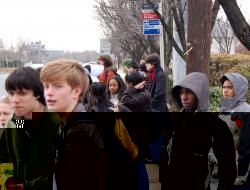 Photo: Blazers stand along Colesville Road waiting for the Ride On, a service that will rightfully continue to be free for students.

Photo: Blazers stand along Colesville Road waiting for the Ride On, a service that will rightfully continue to be free for students.  Photo courtesy of Julia Seiger.

Responding to constituent complaints, the County Council decided not to go through with the plan, understanding that whether the benefactors are athletes with irregular practice schedules, upperclassmen riding to work or freshmen escaping a frigid walk home, the free Ride On system is a safe, convenient, environmentally friendly and, most importantly, dependable method of transportation.

Only students living outside a two-mile radius of Blair are guaranteed access to a school bus route. With this month's snow, it was clear that walking home is not always a practical or pleasant option, but it's also not necessarily worth $1.25 for a two-block bus ride either. The prices add up — a one-way bus ride every weekday for three months would cost Blazers approximately $83. Compare that figure to the $25,000 Leggett aimed to save by scrapping the program — a mere .006 percent of the deficit — and it sure seems like he was trying to take us for a ride.

Most significantly, eliminating the free bus service would have limited students' opportunities to stay after school. The added cost of a ride home presents a dilemma for concerned parents who may not be able to provide transportation for their children in the afternoon. In turn, these students — sometimes the ones most in need of a safe, dependable after-school alternative — return perhaps to an empty house and solitary boredom, a formula for delinquent behavior and little motivation for high academic achievement.

To rob students of the free Ride On system keeps some away from important and successful programs like the Blair Sports Academy (BSA), which, according to director Jose Segura, "empowers students to become part of the student body at Blair." But Segura said that the BSA is nothing without the free bus service. "That's the way they get home," he said.

Moreover, the Kids Ride Free program makes public transportation accessible to financially challenged teenagers whose only alternative may be to hop in a car with an unauthorized student driver. With the rate of teenage driving deaths soaring — 13 in about one month in the Washington area last year, according to The Washington Post — Leggett should have known better than to risk jeopardizing student safety.

But the program is not just about mooching a free ride — it promotes the environmentally friendly public transit system. Students are encouraged to take the Ride On, and first time riders can easily become familiar and comfortable aboard the bus, making it likely that they will ride again. Children should learn about public transportation from an early age, especially in the D.C.-metro area, which the American Lung Association ranked the 12th highest area of soot pollution in 2005 and where congested traffic is as common as power suits.

Suspending the Kids Ride Free program for three months would have been a $25,000 mistake. In responding to backlash from students and parents by preserving the important riding privilege, the County Council proved their commitment to citizens, incorporating constituents' opinions into the decision-making process. So hopefully, if Blazers board the bus April 1 and are asked for $1.25, it will be an April Fool's joke.