County Executive Doug Duncan and the County Council launched an initiative at the beginning of this year to expand the county's system of safety-net clinics. The clinics are part of an effort to provide free healthcare to 40,000 uninsured residents by the 2010 fiscal year. The program's budget will increase incrementally from its current $5 million funding to an annual investment of $15 to $20 million by 2010, according to Joan Planell, a senior analyst at the Montgomery County Department of Health and Human Services who helped found the program.

Much of this funding will go to existing or future clinics in the Blair community, which was identified as a "high-need area" by Steve Galen, executive director of the Primary Care Coalition, a non-profit organization that works with the county government to manage the clinics.

The system of safety-net clinics began five years ago under the Montgomery Cares program, which provided medical care for 10,000 uninsured county residents at an annual cost of $350,000, according to a press release last December. The county currently operates 12 clinics serving 13,000 people, including undocumented immigrants, Council Vice-President George Leventhal said. 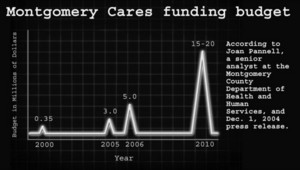 Photo:
The clinics originally emerged independently, as many of them were managed by church or ethnic groups and staffed by volunteer medical professionals, according to Councilman Steve Silverman.

The Primary Care Coalition united the system, and in January 2000, the County Council decided to fund, reorganize and streamline the patchwork system, Silverman said.

The goal for 2010 would serve only half of the estimated 90,000 uninsured individuals in Montgomery County, but studies have indicated that only half are unable to afford medical coverage, according to Silverman. "The other half have voluntarily chosen not to seek healthcare," he said.

Although Montgomery Cares does not impact residents with private health insurance, both Leventhal and Silverman said it effectively constitutes a system of universal healthcare, something both think should be instituted nationwide. "I believe the federal government should provide universal healthcare...[but] if the federal government won't do something, we have to," Silverman said.

The program's proponents view Montgomery Cares as an opportunity to make the county a leader in healthcare reform and to set an example for other areas in the country to follow. "I hope it will spread to at least the state of Maryland and neighboring jurisdictions," Silverman said.

While Planell praised Montgomery Cares's contributions to covering the uninsured, she said its limitations in specialized or extensive care render it short of universal healthcare. "We can help people manage hypertension or diabetes but, for example, someone with cancer, which can require surgery and specialized therapy, is a whole bigger issue we have yet to tackle," she said.

In another healthcare reform effort, the County Council passed a bill on Nov. 1 mandating that the county participate in a contract to provide county government employees with the option of importing cheaper pharmaceuticals prescribed for chronic illnesses from Canada.

The current bill is a scaled-back version of a similar measure passed in September of last year, which would have allowed importation for all county employees, not just government workers. That proposal was terminated when the Board of Education, which controls the labor contract for its 30,000 workers, refused to support the policy.

The Board's decision was based on legal questions arising from the Food and Drug Administration's (FDA) prohibition of drug importation due to safety concerns, explained MCPS Benefits Director Wesley Girling. Board members feared criminal liability for violating federal laws, he said.

Although similar drug importation initiatives have proceeded in other areas, including Illinois and Springfield, Massachusetts, the FDA has not responded, according to Council President Tom Perez's Sept. 22 memo to the Board. "Despite the fact that over a dozen state and local governments have programs in place, the FDA has not filed a single legal action challenging any of these programs," the memo read.

Any FDA response, Perez contended, would only be an injunction and would not hold county government officials criminally liable. "If the FDA unexpectedly reverses course and takes action against a local government, the action will be in the form of a civil suit to enjoin the government entity from operating the program," he wrote in the memo.

The FDA has not prosecuted anyone because it "doesn't really believe the drugs are unsafe," Leventhal said. He called the prohibition a product of political pressure from the American pharmaceutical industry that would never actually be enforced.

Stephen King, the FDA's public affairs specialist for the Baltimore region, was unavailable for comment.

The Board, reluctant to underestimate the potential for legal consequences, doubted that the program's financial benefits would justify its risks, Girling said.

As importing Canadian drugs would only save $10 on each prescription, the advantages may not comprise sufficient incentive to break the law, according to Girling.

In Superintendent Jerry Weast's memo to the Board, he estimated that participation in the program would be scant and that even 40 percent participation would only save the county just over $1.2 million. He predicted that approximately five percent of employees would opt into the program, which would save the county $154,560. A survey in Perez's memo, however, indicated that 70 percent of employees were interested in importing their prescriptions.

The proposal had the potential to save individuals money and was being offered as a choice, argued Valerie Ervin, one of two Board members who voted in favor of importation.

The measure was supported "in employee unions that represent bus drivers, maintenance workers, janitors and not highly paid workers who are not in a position to afford the rising cost of prescription drugs," Ervin said.

Beyond financial questions, the Board ascertained the proposal's safety. Last August, Girling observed the facilities of CANUSA, the Windsor-based pharmaceutical firm that negotiated a contract with Montgomery County, according to Weast's memo.

During his site visit, Girling concluded that the facility was "able to meet our needs and process prescription requests in a timely and efficient manner."

He considered the drugs safe but added that safety cannot be guaranteed from domestic providers, either.

Leventhal affirmed that the drugs are safe, calling Canada "every bit as modern and technologically sophisticated as the United States" and saying it offers "the exact same drugs sold here."

The school board stated that it would reevaluate its position if the county attained a legal waiver or if the county government tested the program.

Duncan formally requested a waiver from the U.S. Department of Health and Human Services to permit drug importation in Montgomery County, according to an Oct. 10 press release.

County Council members expect that testing the program with government employees will prove its success to the Board. "We hope to be able to convince the school board to sign off," Silverman said. He also expressed a desire to eventually allow importation for all county residents.

Ervin was disappointed in the Board's decision but does not expect it to be reversed. She attributed the decision to the influence of Weast's opinion, saying, "If the superintendent is not supportive of a measure, the Board of Education mostly supports the status quo."