Public sections of downtown Silver Spring to be considered for redevelopment

Urban designers commissioned by the Montgomery County Planning Board are creating new guidelines to turn sections of downtown Silver Spring into large public green spaces. Chief architects from the Maryland-National Capital Park and Planning Commission (M-NCPPC) will present their proposal to the board on March 25. 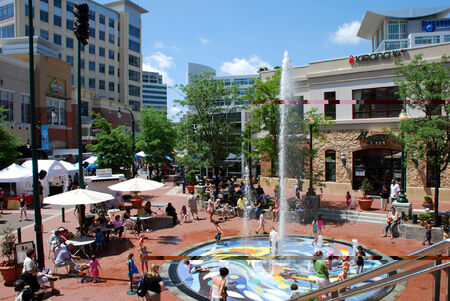 Planners began work on the Green Space Guidelines to address citizens' concerns about the removal of the artificial turf on the corner of Ellsworth Drive and Fenton Street. The Montgomery County Council voted to remove the turf in August 2008 to accommodate the construction of the Silver Spring Civic Building and Veterans Plaza, which will be completed in the summer of 2010.

The artificial turf was a beloved part of the downtown area, according to John Marcolin, an urban designer for M-NCPPC. "When center came up for approval, there was a public outcry," Marcolin said. "By accident, it was almost as popular as the fountain on Ellsworth. One was a highly designed space and the other a placeholder."

The draft of the Silver Spring Green Space plan recommends a few areas as potential green spaces. These potential spaces include the parking lot between Thayer and Silver Spring avenues, the stream valley at the Faulkland Chase apartments built in the 1930s, the Giant Food parking lot off Route 410 and the parking lots facing Georgia Ave in the Ripley District, according to Marcolin.

Public domain is designated a green space if it is comprised of more than 50 percent grass or a soft surface, according to Sandra Pereira, a senior planner for M-NCPPC. There are currently about 19 acres of green space in downtown Silver Spring, but 16 of those acres are concentrated in the Jessup Blair Park in southern Silver Spring. "Jessup Blair Park is on the periphery," Marcolin said. "There aren't connections to it and it has fences around it."

The rest of the green spaces in Silver Spring are small and isolated. "We want them consolidated in at least one area," Pereira said. "They need to be highly visible from adjoining streets or to passerby pedestrians." Marcolin and Pereira identified the fountain on Ellsworth, though it is not a green space, as a model for the ideal public space. "The green space should be well connected to public transportation - trails, buses, metro," Pereira said. "The fountain on Ellsworth is very well connected."