"Crazy for You": Insanely good

When Blazers think about musicals, usually "cheesy," "Disney" and "singing animals" come to mind. Any thoughts concerning plays evoke an intense loathing for some and blissful joy for others. This year's spring musical, "Crazy for You," manages to combine exciting musical numbers with an enjoyable plot, while tactfully avoiding the use of petite forest animals. 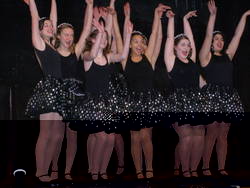 Photo: "He can't be bothered now!" Tap dancing follies girls of Crazy for You sing and dance.

Photo: "He can't be bothered now!" Tap dancing follies girls of Crazy for You sing and dance.

Directed by Kelly Newman O'Conner, "Crazy for You" is easily the best Blair musical since 2003's "West Side Story." Finished in 1992, "Crazy for You" is a compilation of authentic songs and styles of the 1930's Gershwin producers, offering audiences an original blend of new scripting and old scores.

The story opens in New York as Bobby Child (Isaac Arnsdorf) decides to travel to Nevada in hopes of closing a business deal and avoiding his overbearing fiancée and mother. There he meets Polly Baker (Alec Garrin), the strong-willed daughter of an ex-theater producer struggling to save the family's theater. As Child finds himself falling for the willful Baker, the town is thrown into a whirlwind of chorus girls, cowboys and bar fights.

Both Arnsdorf and Garrin's voices perfectly capture the tone and personality of their characters, without seeming forced. Arnsdorf's strong and clear voice is especially powerful in numbers such as "Embraceable You" and "What Causes That," a duet with Bela Zangler (Russell Ottalini). Garrin's numbers are equally admirable.

While the main actors' voices may captivate the audience, it is the chorus that keeps Blazers interested. Even with dozens of members, the chorus line never falters during their synchronized dancing numbers or in their singing. The clash between the rough cowboys and pampered showgirls in "Girls Entrance to Nevada" showcases the chorus members' talent.

Full of humor, but not without its serious moments, "Crazy for You" has a rustic atmosphere which keeps the audience enthralled from the moment the curtain opens. With a distinct old-fashioned feel, the musical highlights the Old West aura with meticulous detail and 1930s-style costumes reminiscent of the jazz era.

Once again, Blair's stage crew has crafted a set that rivals those of professional productions. Throughout the entire play, the actors perform on more than five different locations, from a western saloon to a run down theater. Each set is rich in detail, complete with realistic flourishes.

The orchestra, under the baton of Dustin Doyle, has far surpassed its performances in previous productions in both grace and intensity. Every stroke of a violin, every note on a flute, is perfectly timed, giving the scores the precision and power such an ambitious musical demands.

Whether Blazer's are fans of musicals or not, "Crazy for You" is more than just another mundane production. Rather than just one story line, this year's musical includes a variety of genres — Westerns, romances and depression-era dramas to name a few. Like the actors proclaim in Act I: it's got rhythm, it's got music; but that's not all, it's got undeniable spirit and more.