Blair qualifies one runner for the state meet, fails to qualify team

Going into the 4A West regional meet on Thursday, both the boys' and girls' cross country teams were hoping to qualify for the state meet. But both teams struggled as the girls' team finished in eighth and the boys' team finished in tenth, both over 40 points behind the team ahead of them. The one bright spot from the meet is that senior co-captain Rutvij Pandya qualified for the state meet individually with a ninth place finish. 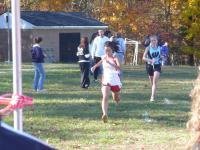 The weather on race day was warm compared to earlier in the week, but the Watkins Mill course is notoriously a difficult one. The girls' team raced first at 3 p.m. The girls had a hard time starting off strong and got stuck behind a large pack in the first 100 meters. Sophomore Theresa Regan led the Blazers for nearly the first two miles of the race with senior co-captain Elaine Chung and freshman Myla Sapp closely behind.

Chung pushed ahead of Regan a little over halfway through the race and finished as the first Blazer across the line with a time of 22:18, good for 36th place. Regan came in at 22:31 and Sapp came at 22:41, placing 41st and 42nd respectively. Sophomore Masha Lafen came next at 45th place in 22:57. Sophomore Jenny Scholar crossed in 57th place at 23:50, followed by senior Abigail Cember in 59th at 24:07 and junior Jan Nguyen in 63rd at 24:31. The team was without lead runner junior Roxanne Oroxom who had a hip injury, according to coach Eric Prange. Walter Johnson sophomore Anna Bosse led all girls with a time of 19:37.

On the boys' side, Pandya and senior Greg Vogel were able to start strong and avoid the perils of being stuck behind a large pack. Pandya led the Blazers the entire race and broke into the top ten with around a mile left in the race. Pandya crossed in 17:06 to give him ninth place and a spot at the state meet on Nov. 8.

Vogel was also expected to make it to the state meet individually and a 23rd place finish would have given him a spot. With only around 10 meters left in the race, Vogel was in 17th place. However, Vogel collapsed and was immediately passed by numerous runners. Vogel showed the heart of a champion by getting back up on his feet and pushing to the finish. However, he collapsed once again only a meter from the finish and was passed by a single runner. Vogel got over the line and collapsed a final time from exhaustion but finished in 24th place, missing the state meet by one second. 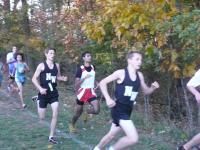 Sophomore Jeremy Ardanuy was the next Blazer to cross the line in 55th place with a time of 18:51. Seniors Logan Talbott, Peter Myers, Lucas Farrar and Amare Tola came in 65th, 77th, 79th and 85th respectively with times of 19:19, 20:09, 20:12 and 20:25 respectively. Tola ran a slower race than usual as he was right behind Myers at the county meet. Sherwood senior Solomon Haile dominated the boys' race, finishing in 15:56 and 34 seconds ahead of the second-place runner.

Though the Blazer teams failed to qualify for the state meet, the general consensus was that everyone gave it their all. "I think everyone ran their hardest," Chung said. "We didn't make it to states, but we ran as hard as we could." Chung added that she has no regrets on the race or the season as a whole.

Prange and coach Charlie Demma echoed that sentiment in a post-race speech. "You guys have given this team and season all you could," Demma said. "Thank you to everyone who came out here either to run or to support your teammates."