The girls's cross country team finished in 12th place and the boys finished in 21st at the county championships at Gaithersburg High School on Saturday. The girls had an average time of 22:29 minutes. Co-coaches James Demma and Eric Prange thought the teams ran a solid race but could have been stronger. "I was expecting around eighth place," Demma admitted. 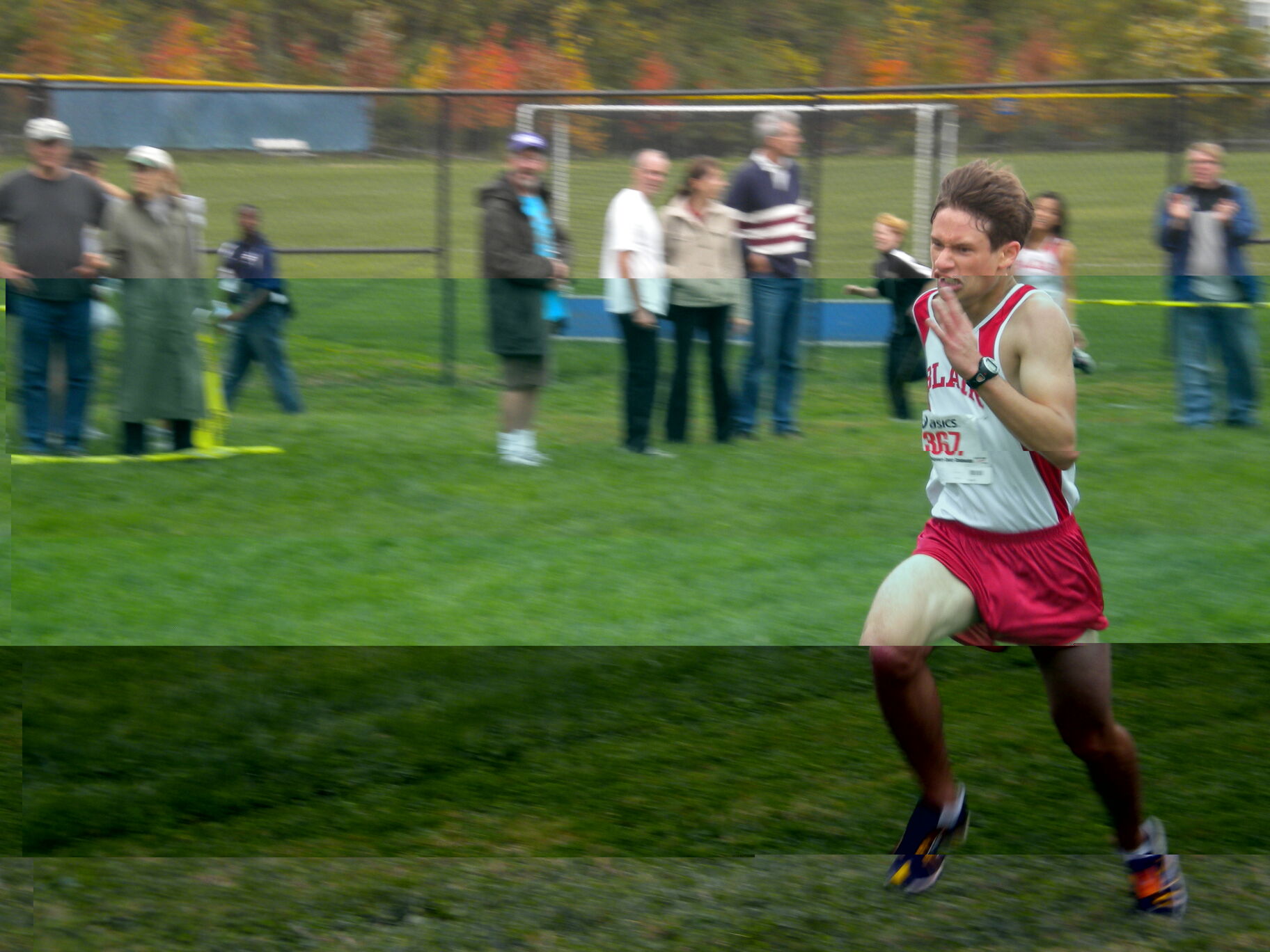 Photo: Junior Peter Leonard bursts forward with an energetic kick as he closes in on the finish line.

Photo: Junior Peter Leonard bursts forward with an energetic kick as he closes in on the finish line.

Out of 140 girl runners, Wootton senior Jessie Rubin won the girls's race with a time of 18:49 minutes, but the overall first place team was Walter Johnson. Sophomore Myla Sapp led the lady Blazers, finishing 38th overall with a time of 21:47 minutes. Junior Natsnat Mehreteab finished next for Blair in 46th place with 21:57 minutes, followed by junior Jenny Sholar in 48th place with 21:59 minutes. Mehreteab said pushing herself against opponents and teammates helped her. "Every quarter of a mile I tried to pass the girl in front of me," she said. "Myla and Jenny also paced me a little."

The rest of the varsity girls, sophomore Jinhie Skarda, sophomore Hannah Buchek and senior Jan Nguyen, finished in 82nd, 87th and 108th places respectively. "The race went okay," Skarda said, "but it was hard because there was a lot of competition."

The coaches felt the girls suffered from the absence of several prominent runners due to sickness, including junior Theresa Regan and sophomore Katherine Klett, who still ran in the junior varsity race.

Whitman senior Andrew Palmer dominated the boys's race with a time of 15:43 minutes, exactly 30 seconds less than second place Northwest senior Chris Miller. Walter Johnson finished first overall by clinching fourth, fifth, sixth and seventh places. Sophomore Conor Donahue finished first for Blair, placing 82nd out of 170 runners with a time of 18:25 minutes. Donahue said his main strategy was to start out quickly and strongly, then run consistently throughout the rest of the race. "I really focused on getting out fast in the first 400 meters," he said.

Juniors Connor Dowd, who took 117th place, and Gabe Pollak, who ranked 119th, were the next Blazers to finish with times of 19:32 minutes and 19:44 minutes respectively. Juniors Shakib Marghi, Dominic Florin and Peter Leonard followed. Leonard felt a lack of motivation hurt his time. "Especially in the third mile, I had problems both mentally and physically," he said. Florin did his best to remain composed throughout the race. "I just tried to stay consistent and regulate my breathing," he said.

Demma felt the boys could have performed stronger starting from before the race. "They already knew they were at a disadvantage, so they ran like they were at a disadvantage," he said. Despite this, most of the boys felt they put forth their best effort. Dowd says he felt consistently confident. "I was pretty psyched at the beginning, and I felt good throughout the race," he said.

The course at Gaithersburg was much flatter than most courses the Blazers had experienced, which pleased Blair runners. "I was able to pass many people on the one uphill," Sapp said. But runners from all teams used the level terrain to their advantage. "It was a fast course, so everyone was going crazy," Florin said. Many runners also noted the sporadic rain showers throughout the race, which created mud puddles on the course.

After today, Demma and Prange are determined to perform strongly at the Nov. 5 regional meet. "The regional course has a lot more hills, so we're going to do a lot of uphill exercises," Prange said. Demma added the team will work on building endurance so runners are not as fatigued. "After you've rested, you run a much faster race," he said.

While the coaches are mildly disappointed with Blair's performance, they expressed optimism for the future. "We're still a very young team," Prange said.