Despite lack of state qualifications, coaches and players are pleased

Blair's cross country girls's team finished ninth and boys's team finished 13th at the 4A West Regional Cross Country Championships at Watkins Mill High School on Thursday. Of the 13 schools that competed, Walter Johnson swept first place for the girls' and boys' races and continued their reign over the county championships.

Though no Blazers qualified for the state championship race, co-coaches Eric Prange and James Demma thought the team's performance was a satisfying end to the 2009 season. "Overall it was a nice, solid improvement," Prange said. 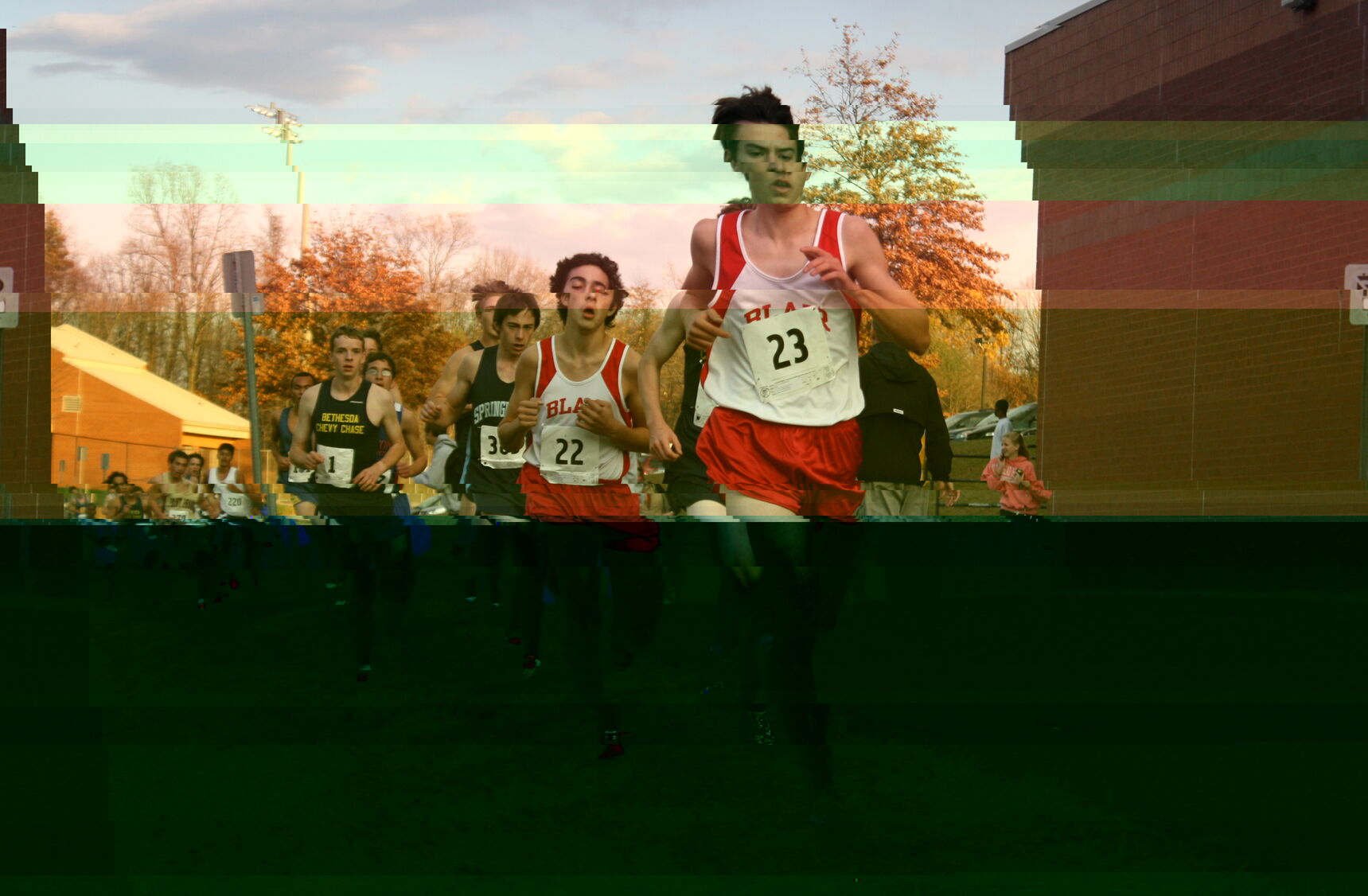 Photo: Junior Connor Dowd and sophomore Connor Donahue stick together during the grueling 4A Regional race.

Photo: Junior Connor Dowd and sophomore Connor Donahue stick together during the grueling 4A Regional race.

Whitman senior Andrew Palmer won the boys's race with a time of 16:04, finishing clearly ahead of second place winner Sherwood junior Jackson Reams with a 16:42 and third place winner Walter Johnson senior Sean O'Leary with a 16:59. Walter Johnson also claimed fourth and seventh places, which bumped the team to first place overall. Junior Connor Dowd and sophomore Conor Donahue led the Blair team in 58th and 59th places respectively. Dowd and Donahue ran shoulder to shoulder throughout the race, finishing only a second apart with times of 19:08 and 19:09.

At the start of the race, Dowd surprised himself and the coaches by running the first few hundred meters ahead of the other 90 runners in the race. "We'd been running a lot of 400-meters, so I just started off at my 400-meter pace," he explained. This allowed him to reach the first major hill first.

Kimmel fell at the first hill, which was a temporary setback. "I got trampled," he said. However, Kimmel was able to recover and race with Leonard for the rest of the course.

The girls's team experienced more disruption in their race. Only a few minutes after the gunshot, the runners stopped due to brief thunder and lightning. The race was postponed for over an hour. Junior Jennifer Sholar felt this put some stress on the girls, but they were able to overcome it and run solidly in their race. Prange believed that most runners experienced such satisfaction with their performance. "Everybody was happy with their race," Prange said.

The predicted "favorite" runners filled the top places in the girls's race; Wootton senior Jessie Rubin easily slid into first with a time of 19:21, and was followed by strong runners from Northwest and Walter Johnson. Sholar ran a confident race in 22:00 minutes, which landed her in 27th place, only four spots away from qualifying for the state championships. While her time was one second slower than at the county championships, she felt like she had made a large improvement because the Watkins Mill course was more difficult. "I felt really good, and I'm really happy with my race," she said. The coaches also felt Sholar's performance was commendable. "Jenny ran a brave race," Demma said. Sholar said she focused on passing every runner that came within a close distance of her.

The team's last race of the season was completed on a difficult course with grass, dirt and pavement. "It was a hard, hilly course," Demma said. He noted that practicing on the course the previous weekend helped the team approach the hills strategically. "They ran a smart race," he said. Mehreteab used her knowledge of the course to work for her benefit. "I knew downhills were my weakness, so I concentrated on passing people on the flat parts," she said.

Overall, the coaches expressed satisfaction in the team's final performance. Prange pointed out that the team had improved throughout the season, despite the many challenges they encountered. "We had a lot of bumps this season, from injuries to swine flu. It wasn't the easiest season." Florin echoed the same sense of pride for his teammates. "It was a good climax to the end of a really good season."