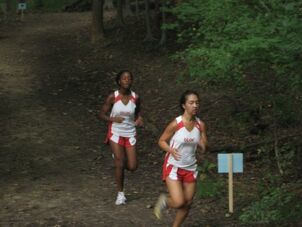 The new course is comprised mainly of a packed-dirt trail, with parts on a loose gravel path, in the wooded area of Wheaton Regional Park. The team runs through the trail twice to complete the standard 5k distance for high school cross country. It includes difficult uphill terrain as well as a long downhill slope, according to senior co-captain Jan Nguyen.

Several factors went into selecting the location at Wheaton Regional, according to Demma. "We wanted to do it all on dirt, no pavement," Demma said. The dirt-packed public trail is different from most other schools' courses, which include many grassy areas and paved roads. Access to bathrooms and water, which are provided in a public facility near the trail, was also imperative.

Once the location was selected, the coaches spent more time establishing specific measurements. "Once we had a general idea of where to put it, we walked through the trail about four or five times to set up the course," said Prange. "It was a very long process."

Blair's cross country team had a home course in the early 90s that was located in neighborhoods surrounding the old school building, which now hosts Silver Spring International Middle School (SSI). Complaints from residents prompted the school to abandon the course, according to Demma. Since the move to the new building, Blair's cross country team has not had its own course due to the lack of space. "There's really no land, you can't run anywhere without having to cross streets," Prange said.

Nguyen noted some of the challenges of the new course. "There's a lot of going up, which gets you tired," she said. "There are also big roots in some places, so it's important to watch your footing."

Demma conceded that the course seems to negatively impact the team's performance, which suffered in the Gaithersburg meet. He maintained, however, that slower times on Blair's home course will not hurt the team significantly. "I expect the slowness to persist, but we only have one more meet there," he said.

While times may be affected, sophomore Billy Kimmel felt the home course provides a significant benefit strategically. "You are able to study it and you know how to run it, unlike going to other schools where you have to run it for the first time," he said.

Blair's home course also poses new challenges for the coaches, who are responsible for ensuring the course has a proper finish line and an efficient system for keeping time records. "It is a lot of work to host other teams," Demma said.

In proximity to the course are several other Montgomery County Department of Parks facilities, including a picnic area, Brookside Gardens and Wheaton Ice Arena and the Wheaton Carousel and Miniature Train - the tracks of which overlap with parts of the path.

Most team members are ecstatic that Wheaton Regional Park was designated Blair's home trail. "It's a really nice course because it's surrounded by lots of trees, and is near many activities," sophomore Beza Abebe said. Kimmel added that the course gave the team more pride. "It was kind of embarrassing not having a home course," he said.

The team has two meets at the course this season, one of which was held last Tuesday, Sept. 15 against Gaithersburg High School. The next home meet is scheduled for Wednesday, Sept. 30 against Wootton High School.