Everybody has certain things they feel very strongly about. Harry Potter, correct grammar, Blair football... fixations also extend into more serious fields such as political issues and social causes and can be perfectly healthy expressions of personal opinion. If left unchecked, however, they morph into obsessions that negatively affect us all. 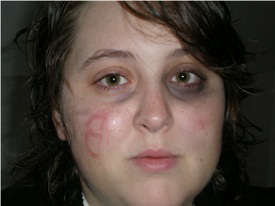 Take the case of Ashley Todd, a die-hard volunteer for John McCain working in the battleground state of Pennsylvania. With the election a little more than a week away and her candidate trailing by over 10 percent statewide according to CNN Election Center, Todd was robbed by a black male, who carved a 'B' into her cheek with a knife after seeing the McCain bumper sticker on her car. It's an ugly story with revolting connotations, implying that supporters of Barack Obama will resort to brutal, thuggish tactics against those of the opposite camp. To some it also implies that black Obama supporters are vicious and uneducated, supporting him purely out of a sense of racial loyalty. Politically savvy people everywhere jumped on Todd's report, analyzing the implications it held for the future of the Obama campaign. John Moody, Executive Vice President of Fox News, released a statement, saying that "some voters may revisit their support for Senator Obama…because they suddenly feel they do not know enough about the Democratic nominee." McCain's camp wasted no time going on the offensive, calling the incident "sick and disgusting."

But wait! Surveillance footage from cameras at the ATM where Todd was reportedly robbed showed neither Todd nor her alleged assailant. Soon police brought Todd in for questioning due to "inconsistencies" in her story. After being subjected to a polygraph test, Todd decided to come clean: it turns out she'd fabricated the entire incident. She's currently charged with filing a false police report, a misdemeanor offense, and is being held in Allegheny County Jail. Bail is set at $50,000.

The entire incident is as ridiculous as it is to be expected this election year. Todd's actions, which could have had very negative effects against the Obama campaign, read like a conspiracy theory but aren't anything new. Constituents have been taking a more active hand in campaigns, resulting in highly offensive and inflammatory rhetoric. This, coupled with the advent of new forms of media such as YouTube and Wikipedia and Facebook, has resulted in one of the dirtiest presidential campaigns in recent memory.

As the first black presidential nominee from a major party, Barack Obama is an easy target for large amounts of racist criticism. Much to the delight of some bigoted conservatives, Obama's middle name is "Hussein," while his last name bears an uncanny resemblance to "Osama." Negative campaign-related materials, including a vast armada of bigoted YouTube videos and blog posts, denounce the candidate with prejudiced combinations of stereotypes/epithets and the term "Barack Hussein Osama." On a shadier note, the McCain campaign itself has been accused of pushing racist videos against their opponents. In March for example, Soren Dayton, a McCain aide, was suspended for actively pushing a racially-charged anti-Obama ad. Rapid 2 a.m. edits to Sarah Palin's Wikipedia page hours before her announcement as the Republican vice-presidential nominee have also drawn skepticism from publications such as the New York Times. To be fair, this trend reaches beyond the McCain camp. Barack Obama's campaign has had its fair share of vocal, misogynistic supporters. Rapper Ludacris for example, released "Politics (Obama is Here)," over the summer, attacking both McCain and former presidential contender Hillary Clinton, insulting McCain for his age and Clinton for her "irrelevance."

Regardless of which candidate you support or which political party you represent, one thing is clear: the theater of American politics has deviated too far from the issues.