Senior Javier Vaca spotted the imposing white-columned Kennedy center after running for 10 miles, jogged past the limestone-and-marble Lincoln Memorial after 11 miles and passed the domed Capitol after 13 miles. Tired, sore and with a cramp in his leg, when Vaca finally reached the finish line 13.2 miles later at Hains Point, he decided that finishing the 2007 Marine Corps Marathon was worth the endless effort and hours of training.

Known as "the people's marathon," the Marine Corps Marathon (MCM) in Washington, D.C. is one of hundreds of marathons held around the world each year. Vaca, along with senior Sebastian Falcon, were among 339 teenagers out of more than 20,000 people total who ran in the 26.2 mile race on Oct. 28, 2007, according to MCM Public Relations Coordinator Beth Johnson.

When Vaca and Falcon signed up, they committed themselves not only to a race but also to months of intense training that would soon test both their bodies and characters. "Completing a marathon is a big achievement for runners of any age, but for teenage runners in particular," Johnson says. "It's great to see teenagers dedicate themselves to achieving such a goal, especially when you factor in the time they already spend each week on school, homework and extracurricular activities."

In the name of love and fitness

Vaca first learned of the marathon from his friend Falcon and when registration time rolled around, he decided to register on a whim. "It was kind of a spur of the moment thing," he says.

Falcon already knew about the marathon as his father and stepfather had run it before. With support from his family, Falcon decided to register. He then asked Vaca, his running buddy, about running it together and soon after, they started training alongside each other. "I thought he and I would both have fun doing it," Falcon says.

Like Falcon, junior Elaine Chung found running to be a family affair. Chung's father introduced her to running half marathons (13.1 mile races) when registration for the 2006 Ocean City Half Marathon opened. Since then, Chung has run two additional half marathons and is planning on running a full marathon in March. But she has developed her own reasons to love running, beyond familial interest. "It's fun, especially when you're running on a trail since there's a lot to see," Chung said. "But also, it's stress relieving and you can get runner's high."

Although running the actual marathon is fun and exciting, the race is the end result of months of intense training. To adequately prepare for the marathon, Vaca and Falcon started training a year before the event, starting with four miles every two or three days and then increasing their mileage as the marathon inched closer. In the middle of training, they would typically run 35-40 miles a week, according to Falcon. "We would mainly run about 7 miles a day for 4 days during the week and then a longer run during the weekend," he says.

The time Vaca devoted to training soon took a toll on his school work. "My grades definitely dropped," he says. "About half the time, you feel more pressured to do stuff after you run, so you kind of get stuff done. But then the other half, its kind of like, you get home and you're really tired."

Vaca even questioned his decision to run the marathon more than once because it required so much time. "Throughout training I did think of quitting a few times when running interfered with school and was time-constraining," Vaca says. "This happened in the very beginning as I became accustomed to running and towards the end when the runs became longer and took more from my weekend."

Other Blair runners have learned to balance school and training for major races with experience. Junior Frank Wen, who has been running for Blair since his freshman year, feels that he managed to juggle training with his schedule. For his first half marathon last April, Wen trained after school and adhered to a regiment from Runner's World Magazine. Occasionally, his training and Pit Orchestra rehearsals clashed and he would be forced to run before school. "Running before school was enthralling, painful and cold but I didn't have to do that too much," Wen says. 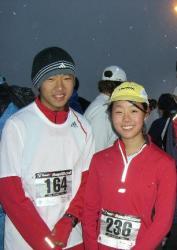 The second time around was much more convenient for Wen when the Rileys Rumble Half Marathon took place on July 29. Because the half-marathon was held over the summer, Wen merged marathon training with preparation for the upcoming cross country season. "I was using it as a training run for cross country," he says. The hours Wen put into training paid off when he escaped injury during the marathon.

But runners who do not properly train are not so lucky. Chiropractor Michael Moses, who is writing on teen running injuries, says that proper training is instrumental to marathon running, especially for teenagers. "Full preparation is even more important for someone who is still growing than for an adult. If a still growing teenager injures a growth plate because they were under prepared, that could stunt the growth of the bone and cause a lifelong disability," he says.

Moses and runners alike agree that the mental and physical advantages of running can outweigh the risks of training if runners are well prepared. Mentally, runners are often happier than sedentary people because released endorphins cause them to be less stressed, according to Moses. "Running actually has the ability to alter an individual's moods because hormones called endorphins are released while running. The act of running allows the individual to focus on the task at hand instead of being worried or stressed about family or other stresses in his daily life," Moses says.

Despite the numerous physical and mental benefits, Wen runs because running is "embedded" in him, the longer the distance the better – hence the marathons. "It's a part of who I am," he says. "Every piece of landscape I look at, I imagine running across it. It's my way of appreciating the landscape."
Although Vaca has learned to enjoy running, he plans to recuperate and rest before dedicating himself to another marathon. Despite everything, he feels he made the right choice when he decided to run the MCM and will always have the finisher's certificate to remind him of that. "I think the final product made it good. It was an accomplishment," he says.