The conversation was private enough: Mike, a sophomore, casually told a friend that he wasn't supposed to be at the school. The secret should have stopped there. But Mike looked up and saw a teacher walking by. He had overheard. In a flash, all of it – the addresses forged, the documents fabricated, the boundaries crossed – threatened to fall apart. The fear of discovery flickered through Mike's mind, but the teacher's next words erased it: "Don't tell the whole school,” he said, and continued down Blair Boulevard.

Although Blair restricts its boundaries to students who live or attended middle school in the Down-County Consortium (DCC), some Blazers arrive from Prince George's County, Washington, D.C., and as far away as Howard County. In an informal poll of 250 Blazers conducted during lunch last week, six admitted to living outside Montgomery County, which could translate to 2.4 percent of the total Blair population.

The issue sparked national controversy late last month when a teacher's aide near Akron, Ohio, was sentenced to ten days in jail for falsifying documents to get her children into another school district. The district had hired a private investigator to track about 100 families, and when the aide fought the district's demands for $30,000 in back tuition, a judge sent her to jail in order to make an example of her situation, news analysts said. 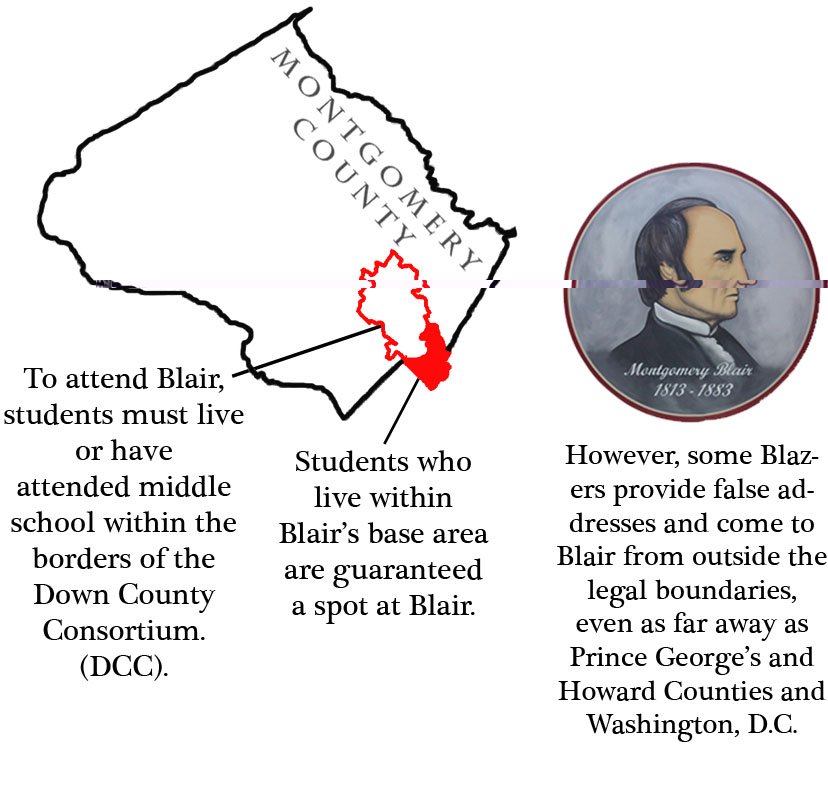 Photo:
Mike's mistake was unusual, but his situation is far from uncommon. In a school of nearly 2,900 students, it's possible to slip through the residency cracks. Those who make the trip to Blair face serious potential ramifications; any student found to be attending Blair illegally will have the opportunity to pay tuition or "will be withdrawn immediately, and records and all will be sent to whatever the receiving school [is],” says Principal Darryl Williams. Blazers like Mike, however, take the risk because of their motivation to obtain a better education and more resources, which they say they have found in Montgomery County.

Mike uses his mother's Montgomery address for school documents, but he goes to her house only about twice a month. Mike has lived alone with his father near the Montgomery border in Prince George's for eight years. His first foray into MCPS was as a Blair freshman last year. He uses the RideOn bus to get to and from school, reducing the possibility of detection.

Chloe, a senior, doesn't need the bus – she simply travels to her grandmother's or uncle's Montgomery houses after school, where she and her siblings wait for their mother to get off work. The uncle's mailing address is her façade, but technology has made it easier to avoid discovery in recent years; she lists her cell phone number on official documents, although the days when she gave her home phone number never led to identification.

Her ride home is simple, but Chloe's path to MCPS was a bit more complicated. After her father left and her family lost their Prince George's home, Chloe's mom moved her family in with relatives in Silver Spring, and Chloe began legally attending Blair in 10th grade. When her mom tired of living with the extended family, she moved Chloe and her siblings back to Prince George's. But the Montgomery address and school stuck, because the family was convinced that the quality of education at Blair was better.

Henry, a senior, has had no such major changes – he has always lived in Prince George's always attended MCPS. It started with his pre-school day care in Montgomery. When it came time to enter the school system, the day care provider allowed Henry to use her address. They've remained close, and Henry goes to her house occasionally to pick up school documents mailed home. Their arrangement has stayed that way for thirteen years.

Henry has enjoyed an MCPS education for over a decade, but Mike has experienced another school system. He says that his father's primary motivation to send him to Blair was the low quality of education and lack of opportunities that his Prince George's schools offered. "There [were] fights everywhere,” he recalls of his old school, which didn't allow students to bring textbooks home. "It's dirty. There was trash everywhere – and then over here, it's clean.”

Chloe, too, has experienced the chaos of trying to learn in a situation where peers are unmotivated, and she says the differences between her former high school and Blair are clear. "I had teachers that when you came to class, the kids would kind of take over,” she says. "[Teachers] would give you a book and tell you what pages to read and what questions to answer.”

At Blair, she says, students care about their classes, allowing teachers to focus on engaging students through discussions and interaction. Testing statistics indicate a disparity between the school systems: The mean SAT score in Montgomery in 2009 was 330 points higher than that in Prince George's, while eighth-grade Maryland School Assessment proficiency rates were more than 30 percent higher in Montgomery.

For Chloe, however, the benefits of a Blair education come with a new concern: the possibility of getting caught. Although the worry dwindled as she became more comfortable at the school, it's never far from her mind. "I feel scared sometimes because I heard that something [could] happen to my parents, like they could go to jail,” she says.

Regardless of the incident in Ohio, such anxiety is unfounded: Expulsion is the most serious consequence possible, according to Lesli Maxwell, a spokesperson for MCPS. "I don't think that attending outside of your jurisdiction is a criminal act,” she says. "We're not aware that anybody's ever been arrested for something like this.”

Despite her fears, Chloe says that she is committed to engaging fully in the Blair community. She occupies herself with extracurricular activities and tries to be a support system for her friends and family. "I'm really involved in school, so if anybody needs help, I'll volunteer,” she says. "It's not for the [Student Service Learning] hours; I just like helping.”

Mike says he enjoys the social freedoms that Blair affords him. When his father first told him that he wanted Mike to attend MCPS, the announcement surprised and concerned him. Mike worried that the adjustment would be difficult. Instead, however, he found the atmosphere much more welcoming and the people much friendlier. At his Prince George's school, he says, "you have to know which friends to choose because you'll probably get caught up in a bad situation.” In Blair, he's quickly found a spot in a large group of friends.

Having spent his entire academic career in MCPS, Henry says he is certainly not afraid of participating – and he has athletic achievements to show for it.

In fact, he says, his sports team is such a strong community that his non-residency is out in the open and not an issue. "My coaches already know,” he says. "I'm up front with them, and they're fine with it.” Once, when he was injured, a coach even drove him home – across the county line – without incident.

Williams argues that such practices are anything but incidental. Attending Blair illegally, he says, is primarily a matter of fairness. Since Blair uses the Preferred Choice system along with other DCC schools, not all those who wish to attend are able to. Prince George's or D.C. residents take up those spots without paying the requisite tax dollars to Montgomery County and, indirectly, MCPS. "I have students who live in [the Blair] area who want to come here, but they can't, because I'm at capacity,” Williams says of DCC students who try to enter Blair after the school year has begun.

There are also serious security concerns. In the case of an emergency or an administrator's need to contact parents, a false address or misleading phone number could magnify the problem, says Williams.

Although he declines to reveal specific tactics, Williams says that the administration has various ways of investigating Blazer residency, and the problem is so common in a school of Blair's size that Williams deals with some sort of residency issue – from simple moving to discoveries of illegal attendance – every week.

For the most part, Chloe doesn't stress about those kinds of concerns. She wants to squeeze the most out of her high school experience. "I feel like if I go to the school I want to go to and I learn the things I want to learn, then it'll help me later in life,” she says. Focused on the future and the opportunities that she sees across the Montgomery line, Chloe says, she refuses to let any border stop her.