"D-War" is a monstrosity

Legends filled with giant dragons, snakes, monsters and lots of fighting are supposed to be exciting and suspenseful. But even though "Dragon Wars: D-War" contains all of the above, it lacks the directing, acting and plot that makes other fantasy films worth seeing. Instead, the film appears to be a rip-off of "Godzilla" and "King Kong" with extra special effects.

The movie begins with a flashback into the childhood of Ethan Kendrick (Jason Behr), a young reporter for tv station CGNN. An antique storeowner, Jack (Robert Forster), tells him the Korean legend of how a maiden is born every 500 years with a special power. On her 20th birthday, the maiden is to be sacrificed to the good Imoogi, a giant snake, who will then transform into a dragon and ensure peace. However, the maiden falls in love with her protector, and together they run away from the good Imoogi and the evil Imoogi, known as the Baraki, denying both the good Imoogi and the Baraki the chance to become a dragon.

Now, 500 years later in present-day Los Angeles, Ethan is the reincarnated protector and Sarah Daniels (Amanda Brooks) is the modern version of the maiden approaching her 20th birthday. As the Baraki tears the city apart with its army looking for the couple, Ethan and Sarah have to decide whether to thwart fate again or to sacrifice Sarah to the Imoogi. 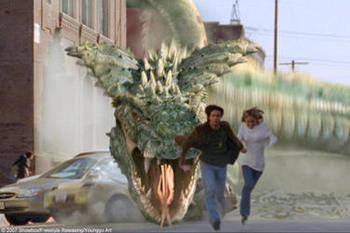 Photo: Ethan (Jason Behr) and Sarah (Amanda Brooks) run from the evil Imoogi as it hunts them down in L.A. Photo courtesy of Freestyle Releasing.

Photo: Ethan (Jason Behr) and Sarah (Amanda Brooks) run from the evil Imoogi as it hunts them down in L.A. Photo courtesy of Freestyle Releasing.

Producer and screenwriter Hyung-rae Shim attempts to merge Korean culture and scary monsters, making the plot a jumbled mess. The plot leaves no time for the viewers to digest information, moving quickly from one scene to another. Eventually, the storyline just becomes a mix between creature battle scenes reminiscent of "Godzilla" and shots of the monster terrorizing the city much like those in "King Kong." The film even includes a "King Kong" scene of a monster climbing up a huge building, complete with the helicopters hovering overhead.

In the screenplay, Shim doesn't give any thought to character development, focusing solely on the action. Ethan and Sarah may be destined to be lovers, but viewers will still be confused as to how they are able to fall in love just by running away from giant snakes. Although not intended to be, "D-War" can create a few laughs due to some ironic moments and corny lines.

Behr is supposed to be the superhero, the knight in shining armor. However, his portrayal as both the lover and the protector is anything but convincing. Instead, Behr only seems to depict the tension in the movie, failing to cover other aspects of his character. Brooks may have looked like a damsel in distress, but her acting is far from matching her appearance. She does not show the gradual shift in personality of her character. Instead, Brooks surprises her audience with arbitrary decisions and actions that seem to be out of character.

What "D-War" lacks in everything else, it makes up for with its special effects. From beginning to end, the film uses spectacular computer graphics to make creatures like the Imoogi seem real and alive. The Baraki army appears invincible, with prehistoric-looking creatures that have built-in missiles. The effect of the Baraki is especially stunning, with its large scales sparkling as the snake travels throughout the city, destroying everything in its path.

Ultimately, though, this film contains nothing worth seeing except impressive computer graphics, and anyone wishing to watch this fantasy film should not expect anything more than some action-packed fighting scenes and some intense special effects.

"Dragon Wars: D-War" is rated PG-13 for intense sequences of violence and creature action and is now playing in all theaters.