On Jan. 20, Nick Stuban, a sophomore at W.T. Woodson High School in Fairfax, Virginia, took his own life. Stuban was a star football player and a respectable student at Woodson, but was suspended from school and required to transfer after he was caught with a capsule of JWH-018, essentially fake marijuana, on school premises. After Stuban's tragic death, Fairfax County Public Schools (FCPS) is under high scrutiny for their strict disciplinary zero-tolerance policy. 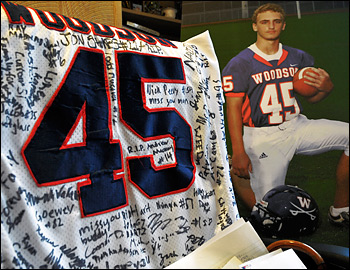 Stuban is the second student in two years to commit suicide after being suspended in FCPS. Josh Anderson, a junior at the time of his death in 2009, was suspended after being caught smoking marijuana on school property. He killed himself the night before a disciplinary hearing that would determine his fate in terms of school and social activities.

Of course, it is irrational to blame the suicides completely on FCPS. The true motivators and reasons for the students' deaths' cannot be pinpointed, but that is not to say that the discipline enforced by the school administrators undoubtedly placed far more stress on the individuals. While Stuban and Anderson's situations may be viewed as extreme, they must not be overlooked. For when examining Stuban's harsh punishment and expulsion, the story does not seem to add up.

JWH-018 is completely legal synthetic marijuana, which can be purchased and used in the U.S. without any sort of infraction. Even though possession of the substance on school grounds is illegal, why expel a student for possessing a compound that isn't even the real thing?

When commenting on the subject of expulsion, the motives behind Stuban's expulsion are questionable at best. Was it really necessary to take Stuban away from his friends, current activities and familiar school environment to move him to a completely different school? It would be different if Stuban had the potential to cause future harm to himself or anyone else at Woodson by remaining at the school, but he didn't.

All of these measures seem quite extreme when dealing with a student who has not been in an ounce of trouble in school prior to this incident. I'm not saying that students should be let off "easily" because of their past behavior, but a student with a completely clean record certainly shouldn't be treated the same as a kid who has a long history of school related infractions.

What FCPS and our own county system need to realize is that the zero-tolerance policy is flawed due to the fact that it dishes out an equal punishment to students who break the rules - even if the scenarios are completely different. Situations like Stuban's put the school districts in a bad position because they have failed to realize that the consequences they are giving out for student offenses cannot fit under one strict policy.

If you're a good student, show signs of regret, and volunteer for things such as drug counseling, schools should be able to use their discretion in your situation instead of having to implement a zero-tolerance policy that is too broad and covers the whole county. A student with a chronic problem with drugs or other issues such as truancy should deal with harsher punishment provided by discretion through the school itself, as they have had multiple failed chances to prove themselves.

The rationale behind Stuban's expulsion is blatantly flawed, and to avoid future incidents such as these, Fairfax County and other counties that still have the zero-tolerance policy in place have some serious work to do in order to correct the school systems' disciplinary actions. Stuban's story is truly tragic, but if proper changes are made, a similar suicide story will never be told again.