On Sunday, the non-profit organization, Capital Pride Alliance, held its annual Lesbian Gay Bi-sexual Transgender (LGBT) festival. The celebration was just one of several events that the organization hosts in the nation's capital around the first week of June each year. 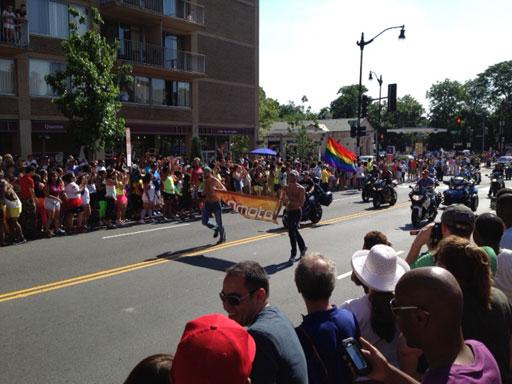 The Capital Pride Alliance aims to "serve to celebrate, motivate, and support our diverse communities in order to grow and protect our legacy for future generations," according to its mission statement. Each year, it hosts a parade and festival to honor the LGBT community. The festivities are open to all, and the number of attendees has grown since the first festival back in 1975. One attendee, junior Abigail Will, noticed that the festival's popularity has even grown from last year. "This pride was a lot different [than last year's], more people went," Will said.

Although more people participated in the events this year, there were fewer performance and information groups in attendance than in previous years, according to senior Jenny Beech, who also attended. "There wasn't as much [happening] on the stage, and there weren't really as many interesting things to see," Beech said.

During the festival, various organizations and "rainbow vendors" (people selling LGBT apparel) set up booths along Seventh Street, Pennsylvania Ave. and in the surrounding area. The organizations targeted topics such as sexuality, religion, family and college. Beech appreciated the variety of groups that participated. "There were a lot of organizations that I had never heard of, but who have messages I agree with," Beech said. 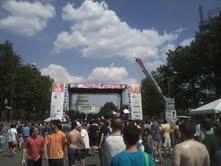 Photo: On Pennsylvania Avenue, a large stage was set up where various musical groups from the LGBT community performed for a joyous crowd.

Photo: On Pennsylvania Avenue, a large stage was set up where various musical groups from the LGBT community performed for a joyous crowd.

This year's Capital Pride parade, which was similar to the festival, was held on Saturday. Dozens of organizations came together to inform people and show people what they stand for.

Many people came out to watch the groups march, and a few Blazers had the chance to be a part of the parade, including junior Evan Morris. "I have an internship at an organization called Sexual Minority Youth Assistance League (SMYAL). They had a float and I was invited to ride on it," Morris said.

Attendees believed that both the festival and the parade were warm and friendly environments where all were welcome. "There were all different age groups, races, religions and sexualities joined together to fight for one cause, which was really powerful," junior Anna Savage said.

Beech appreciated the opportunity to connect with similar individuals and the organization's efforts to create a warm and accepting environment. "It's great to be somewhere and know you have something huge in common with almost every single person there," Beech said. "It's also nice to be able to celebrate something that is often not accepted in everyday life."

Editor's Note: Evan Morris will be a Silver Chips Print staff writer in the fall.