When D.C. Schools Chancellor Michelle Rhee took control of the D.C. school system nearly six months ago, nobody expected her to so radically reform the district. To many Washingtonians, she was just another notch on old D.C.'s belt – another replacement for the six superintendents who have failed in the past decade.

But by pushing legislation that will give her the power to fire non-union central office employees without cause, this seventh superintendent has taken more juristic steps towards improving this system in six short months than others failed to do in the entirety of their terms. With the D.C. Council's approval of the Public Education Personnel Reform Amendment Act of 2007 on Jan. 8, Rhee will be able to take stricter control of the D.C. Central Office, a disorganized bureaucracy that has been the root cause of many problems within the failing system. In addition to giving Rhee power over the jobs of over 400 central office employees, the bill provides funding to close 23 under-enrolled D.C. schools, according to the Washington Post. 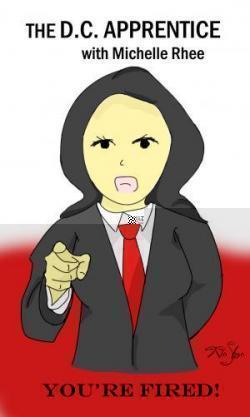 The statistics show that the D.C. school system has been blemished for many decades, and the Central Office has done little to aid in reform. "Fixing D.C. Schools," a study complied by the Washington Post, presents information about the appalling test scores in the D.C. public school system and the lack of qualified administrators and teachers. The study shows that D.C. students score at the bottom among 11 major city school systems in reading and math. Thirty-three percent of poor fourth graders in the nation show limited skills in reading and math, but in D.C., this figure is as high as 62 percent. Within this system only 62 percent of teachers are qualified, a figure that has contributed heavily to low test scores.

The messy, inefficient bureaucracy of the Central Office limits the influence that it can wield and is a large factor in the plight of the D.C. school system. The authority Rhee received over the careers of non-union workers is necessary to implement essential changes. The administrators within the office are notorious for losing book orders, misplacing student files and running a disorganized system of keeping 4.6 million personnel documents, according to the Washington Post.

Michael Casserly, the executive director of the Council of the Great City Schools, the only national organization exclusively representing the needs of urban public schools, has mixed feelings towards the legislation but agrees that the Central Office is a major hurdle in school reform. "The school system's operations have not worked to provide the teachers and students of the system with adequate supports. For instance, staff is often paid inaccurately, buildings do not get fixed, materials and books are not delivered," he said.

Although Rhee's newfound authority is a must to improve the D.C. school district, several labor unions within the area believe otherwise. Nathan A. Saunders, general vice president of the Washington Teachers' Union, believes that there is nothing within the bill that proves that firing central office figures will help students advance, according to a Washington Post Article. But the irrefutable evidence shows that Central Office reform is the first step to helping D.C. schools. Other opponents feel that this bill will give Rhee too much power, which she may abuse to wrongfully hurt the careers of central office employees. Yet, with a solid credibility rank behind her and the desire to reform D.C. public schools, Rhee will use her new authority to look out for the best interests of all Washingtonians.

D.C. public schools have been at the bottom of the barrel for years, and the disorganized Central Office has been able to do very little to create change. "The Central Office has not done the job it needed to do on behalf of the kids," Casserly said. As six superintendents have failed to reform D.C. schools over the past decade, it is clear that the system needs new initiatives. By obtaining the power to fire non-union central office employees without cause, Rhee has made the bold and necessary statement that she will push to reform D.C. public schools, starting from the heart of the problem – the D.C. Central Office.