“DC Super League of Pets” is an enjoyable family watch

Although simple, this animated comedy will leave both children and adults barking in laughter 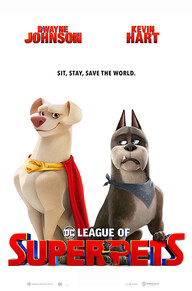 After 60 years from the initial release of the DC Comics, “Legion of Super-Pets,” Warner Bros. brings the comics to life in the movie, “DC Super League of Pets,” leaving some individuals rolling around on the floor in laughter; behaving similarly to their own dogs.

The movie begins with the destruction of the planet Krypton. A Labrador Retriever, Krypto the Superdog (Dwayne Johnson), manages to survive the planet's destruction by sneaking into an escape pod with baby Superman (John Krasinki). Together, they head to Earth. Many years later, and this duo are best pals, fighting crime everyday together with their super strength, flight and x-ray vision. Krypto loves being Superman's best friend more than anything else in the world, and the two are practically inseparable.

One day, when neither Krypto nor Superman are expecting any trouble, a powerful supervillain by the name of Lulu (Kate McKinnon) uses green kryptonite to take away their powers. This supervillain, who happens to be a hairless guinea pig, kidnaps Superman and holds him captive in a prison with a ticking time bomb. It is up to powerless Krypto and a ragtag group of animals to defeat this maniacal supervillain and her henchmen and save not only Superman, but the rest of the world.

Krypto forms a ragtag army from a group of pets that escaped an animal shelter with newfound powers. Among this group includes: Ace, a grumpy Boxer (Kevin Hart), PB, an enthusiastic pig (Vanessa Bayer), Merton, a nearly blind turtle (Natasha Lyonne), and Chip, a hyperactive squirrel (Diego Luna). Together, Krypto and his group of new friends use their powers to take on Lulu in an attempt to save their friends and the world at large. These well known voice actors, such as Hart and Johnson, perfectly match the expected voices of the animals and deliver well voiced punch lines that will leave a smile on your face.

Throughout the movie, there is great animated action between all of the superheroes who are constantly fighting. During these action scenes, the ragtag animal army has to learn how to use their powers, and like watching a toddler mature into an adult, by the end of the movie, the pets are much more capable of controlling and using their powers.

In addition to the exciting plot and action scenes, there are multiple comedic scenes throughout the movie that keep it light and fun for audiences of all ages. Whether it is a funny conversation between voice actors Kevin Hart and Dwayne Johnson, or a sneaky adult joke that flies over the heads of younger kids, this movie has no shortage of comedic moments.

“DC Super League of Pets” isn't just a surface-level entertainment movie. Several moments in the movie, from Krypto’s refusal to leave Superman trapped in the supervillain’s prison to PB’s enthusiasm at being reunited with her owner, highlight the themes of friendship and unconditional love that our pets have for us. Although some of our pets might not quite be able to save the world to show us their love for us, the devotion Krypto shows Superman will ring true to all pet owners.

At the end of the day, “DC Super League of Pets” may not be the most complex or deep movie that you will ever watch, but it does provide some light comedy and entertaining action and would be a fun movie to watch, especially for some of your younger siblings.

"DC Super League of Pets" is Rated PG for action, mild violence, language and rude humor. It is now showing in theaters and will be streaming on HBO Max soon.