For most high school students, the word "because" is not difficult to spell. But for junior Robert Ginsberg, it would be a struggle if his second grade teacher hadn't taught him to sound it out. 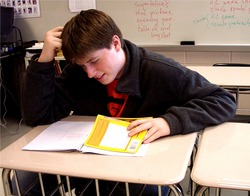 Photo: Junior Robert Ginsburg is one of Blair's students that continues to succeed in school despite his disability.

Photo: Junior Robert Ginsburg is one of Blair's students that continues to succeed in school despite his disability.

Ginsberg has dyslexia, a learning disorder that impairs reading and comprehension skills. For teenagers like him, remembering how to spell simple words can be harder than doing other things. While Ginsberg can quickly solve a trigonometric equation, he still uses the technique he learned in second grade to spell the word others wouldn't think twice about writing.

Ginsberg doesn't let his dyslexia get in the way of his education. He maintains good grades in some of the hardest classes at Blair, such as AP Modern World History, even if it means getting his mom to read him the extensive AP text notes aloud, consuming hours of their day. Ginsberg still struggles with many things that kids without disabilities don't have to deal with. "Because I can't spell, the meaning of my writing sometimes gets lost in the sentence," he says.

Many students across the nation are in the same position as Ginsberg. According to IDEA Data, 26,218 children between the ages of 12 and 17 in 2003 have been diagnosed with a specific learning disability. The National Center for Education Statistics, a web site that provides public access to education survey data collected by the U.S. Department of Education, states that in 2001, 95 percent of public schools in the nation had children with learning disabilities, while only 55 percent of those schools had special hardware available to aid those students. Of the 26,000 students with disabilities, half of them don't have the right tools, hardware and accommodations that Ginsberg and other Blazers do.

Not only is it difficult for students to read and comprehend at the same pace as their peers, they also have to deal with criticism from their friends and classmates. Junior Maura Druhan has a learning disability that impedes her ability to understand simple skills and concepts. Druhan finds difficulty in dealing with her disabilities because she feels like she's on a different learning level than many of her friends. "I just feel like I'm not in the classes I want to be in, like honors and AP classes," she says. "I guess I want to be in the same classes as my friends."

Speech language pathologist Bonnie Curl, who specializes in the assessment, treatment and prevention of communication disorders and runs a private practice in Takoma Park, works with children with disabilities. She helps them improve their reading comprehension, reading decoding and written language skills, which she says are the most common learning disabilities. The problem with reading comprehension is not that kids can't read, but that they don't understand the passage.

"If your eyes are on the page, teachers assume you know what you're talking about," says Curl. When the weakness lies in written expression, it's likely that the student can't even write a single paragraph.

Another form of a learning disability has difficulty with reading decoding, a case where a student can't recognize a simple sentence. "They can't recognize the subject, or the verb, or any part of the sentence," Curl says. She also suggests that the most difficult part about the effects of disabilities in school is being able to participate in class. "When you're in high school you don't want people to know you can't read," she says.

Curl also talks about how not being diagnosed with a disability can affect the student psychologically. "Once a college student came home on his break and was tested for disabilities. When I told him he was severely dyslexic, he began to cry. The kid said, 'I wish someone had told me that, this whole time I thought I was stupid,'" says Curl.

Junior Eli Simon-Mishel, another Blazer with a minor learning disability, finds that, although he rarely has to use his accommodations, his classmates criticize him when he does get help. "When I take extra time on a test, my friends get annoyed because they had to turn in an unfinished test, while I get more time," Simon-Mishel says.

In spite of their disabilities, Ginsberg, Druhan and Simon-Mishel are all learning to cope in an environment as big as Blair. The three are accepted socially and have excelled academically, but they don't forget their situation.

"Dyslexia," Ginsberg says when asked what his disability is called. "But don't ask me how to spell it. I'm dyslexic, remember?"