“Dear Evan Hansen”, it was great to see you again

The Broadway musical-turned-movie was not perfect, but was emotionally powerful nonetheless 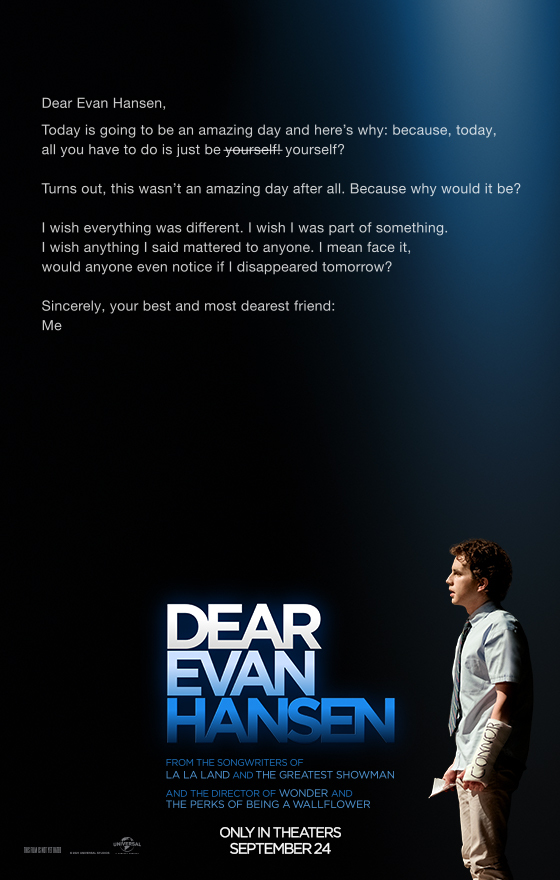 Theater geeks everywhere have been blessed with a cinematic remake of one of the most relevant musicals created in recent years. The film adaptation of “Dear Evan Hansen,” the hit Broadway musical of 2018, was released on Friday, Sep. 24. Fans of the musical have been eagerly awaiting its release, but the musical's transition from Broadway to cinema has opened floodgates of criticism. Though fans of the Broadway musical may be slightly disappointed by this reproduction as it pales in comparison to the original performance, “Dear Evan Hansen” is still an emotional film that brings the best parts of its stage performances to the big screen.

“Dear Evan Hansen” follows the story of Evan Hansen (Ben Platt), a high schooler grappling with social anxiety and depression. After high school peer Connor Murphy (Colton Ryan) dies by suicide, Evan lies and claims to have been Connor’s best friend. In the beginning, Evan’s lie helps him form new relationships and gain both confidence and popularity. But lies only last so long, and Evan soon faces the repercussions of deceiving his community.

Numerous critics brought up multiple points of contention regarding the film’s creation even before it was released, the most prominent of which being the casting of Ben Platt as Evan Hansen. Though the Tony-Award winning actor was the first to step into the role on Broadway, many pointed out that Platt was turning 28 this year. How could a fully-grown man play a high schooler on screen? Movie cameras were not as forgiving as the distance and darkness that Broadway theaters provided.

However, no one else could have done this role justice. At least not like Platt, a talented actor who performed as Evan Hansen eight times a week for over a year when the musical was still on Broadway. Although brief close-up shots make his make-up and wrinkles painfully obvious, Platt's uncertain stance, awkward gait, the way his lips and cheeks twitch, and the movement in his fingers showcase the depth of his expertise with the role of Evan Hansen. Platt’s grey eyes are particularly captivating as they offer the audience a window into Platt's mind where they can observe his vulnerability, happiness, and fear.

But the most important reason why no one else could have performed this role is definitely Platt’s voice. A glorious vibrato when Hansen is excited, a gentle falsetto when he is calm, cracks you can hear when he is crying -- audiences can’t help but be moved by its subtleties. Ben Platt’s extraordinary vocals are indisputably this movie’s saving grace.

The director, Stephen Chbosky, is no stranger to movies centered around teenage struggles. The author and director of “The Perks of Being a Wallflower”, Chbosky has a knack for picking the perfect shots to most accurately relay the common teenage experience. “Waving Through a Window”, the musical’s opening number, takes place with a pep rally in the background. Excited kids and athletes whizz behind Evan in a swirl of banners and pom-poms. Our protagonist feels lost and unseen in the crowd. This scenario is one that many of us are all too familiar with.

Scenes that are more raw, like Evan shuddering on the floor of the school bathroom or montages that describe memories of Evan’s traumatic summer, demand such emotional responses from the audience that they are almost uncomfortable. Admittedly, some parts of the movie are a bit cliché, but that is only to be expected. It is, after all, a high school drama.

The one aspect of this movie that was right on the money was definitely the casting. Nik Dodani plays Jared Kleinman, Evan Hansen’s best “family friend”, with the perfect amount of sarcasm. Watching Danny Pino as Larry Murphy cry over the death of his son for the first time is heartbreaking. Julianne Moore’s breathtaking performance as Evan’s mother in “So Big/So Small” was another high point of the film.

And while this movie did have numerous positive aspects, it was not perfect. The plot makes many viewers particularly angry, as many of Evan Hansen’s actions are cruel and border-line sociopathic, making it difficult to root for him throughout the film. However, the movie is about a flawed teenager. He does terrible things, and Evan’s actions are in no way justified by the movie’s creators. Hating this movie for the plot only results from a lack of understanding regarding its creators’ goals.

So, with all that being said, should you watch it?

Yes. There is something in it that every viewer can relate to in some way, and its message promoting the importance of mental health awareness and the dangers of social media are universal. The film is definitely worthy of two hours of your time.