Sherwood Warriors too much for worn-out Blazers on Senior Night

Exhausted and sunburned from the previous afternoon's outdoor pep rally, and emotionally drained after a heartbreaking loss by the boys' team just minutes earlier, coed volleyball fell to the defending Montgomery County champion Sherwood Warriors on Friday night in three games, 25-15, 25-15 and 25-22. Despite a strong push near the match's end, the Warriors were too much to handle in the final matchup of the regular season, as the Blazers fell in straight sets for the first time all season. 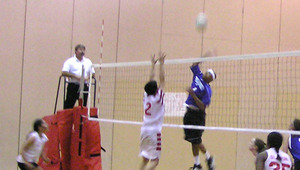 Tim Lee at the net

Having already locked into the sixth seed, Blair mustered a spirited performance on Senior Night in a game inconsequential to the upcoming county playoffs. Seniors Cal Burton, Brian Han, Jung Han, Tim Lee, Christie Lin, Neil Mendhiratta, Felicia Olawuni and Wendolyn Quintanilla were honored in a brief pregame ceremony. Although the regular season ended on a down note, with the team having lost three of their last four games, the coed Blazers look to make a strong push in postseason play, with a rematch against Sherwood this Thursday after a win against Rockville in the first round.

Friday night's matchup began with a fierce point-by-point struggle to start the first game. Neither team could assemble a lead greater than one point, as the back and forth battle led to a 7-7 tie. The early goings were again marked by inconsistent play from both sides, as six of the game's first 13 points came off unforced service errors. The Warriors found their groove first, exploiting holes in Blair's defense and spiking with intensity to take a four point lead. A diving save from junior co-captain Julie Brice cut the deficit to three, but the Blazers were unable to build upon the play, as th Warriors cruised through the rest of the game. A well-located Sherwood hit ended the first game, a 25-15 win for the visitors that would set the tone for the rest of the night.

Game two got off to an inauspicious start for the Blazers, as junior Julie Zhu sent the opening serve out of bounds. Blair proceeded to score the next three points, before a wayward spike from Lee evened the score. At 5-5, the Warriors unleashed a 7-0 run that ended only when a serve went into the net. Spikes by Lee and Burton scored three straight for Blair, but superior net play of Sherwood prevailed, as the Blazers were unable to match their opponent's height advantage. The second game ended with a whimper for the home team, a 25-15 loss.

Facing a near-insurmountable two-games-to-none deficit, the coed Blazers attempted a rally with a spirited "Pump, Pump, Pump It Up" cheer, gaining steam for what would be their strongest performance of the night. Visibly tired, Blair held their own against the defending champs early on, maintaining a slim lead for the first 20 points. A play at the net by Lee coupled by a quick tap by Burton put the score at 12-10, Blair, sending the home crowd into a frenzy. Momentum soon shifted the other way though, as the Warriors found their groove and built a five point lead. The home team was not ready to give in just yet, as the Blazers went on a last-ditch 5-0 run with Zhu serving, tying the score at 22 after spikes from Burton and Lee and an ace. Still, the valiant effort was not enough, as the Warriors scored the final three points of the match, winning the decisive third game, 25-22.

According to coach Greg Franklin, the Blazers were exhausted and outmatched against the 11-1 Warriors. Friday's matchup was the team's third game in five days, a brutal schedule on top of the draining pep rally and boys' game. "[Sherwood] fought much harder," he said. "It was a good fight though. We didn't give up." Franklin was especially pleased with the team's play in the third game, an impressive stand in a losing cause.

"We were just drained of energy," agreed Lee, also citing the pep rally and the boys' game as factors leading to the team's fatigue. According to the co-captain, the Warriors were able to make plays and exploit formation mixups by the worn-out Blazers.

"We've got a lot of experience and we hustle," added Sherwood coach Pete Siarkas. "[Blair] played us tough." Like Blair, Sherwood finished its regular season schedule on Friday, and will begin playoff play next week. Siarkas hopes to have his team geared towards the postseason. "We're looking forward to defending our title," he said.

Franklin hopes to rest up and come prepared for the postseason. "Everybody's going to get some rest." Lee too emphasized the need for focus and intensity come game time. "[Sherwood was] probably the better team tonight," he said, "[but] if we can play with a lot of energy, we can beat anybody." The Blazers will face the Warriors again this Thursday, May 9, at 7 p.m. at Sherwood after defeating Rockville on Tuesday night in a thrilling five-game contest.

Blair coed volleyball takes on Sherwood away on Thursday at 7 p.m. in the second round of the county playoffs.