For the first time since the Republican Revolution in 1994, voters have elected a democratic majority in Congress. Now, with a 51-49 majority in the Senate and a 232-202 majority in the House of Representatives, the Democrats can pass the legislation that they've wanted to for the past 10 years. But with a Republican White House and divisions within their party, they may find it hard to get enough support for their bills. With topics controversial across America and in the Capitol, representatives will vote based on their loyalties: with their party, with their constituents or with their own initiative.

President George W. Bush vetoed a bill for the first time last year and could use his veto power more over the next two years, and the divided government could create more political gridlock on dividing topics like stem cell research, Social Security and corruption within the government. The President's position on the War in Iraq, as well as the situation in Iraq, is changing for the better or for the worse, depending on whom you ask. The Democratic majority faces a tough road ahead and will find it difficult to make progress in the four following major issues facing the legislative and executive branches of the government.

Stem cells: In July, Bush used his veto power for the first time during his presidency to veto the Stem Cell Research Enhancement Act of 2005. The House tried to override his veto but couldn't get the two-thirds majority. Even with the same party in control of both the legislative and executive branches, this veto proves there is friction along party lines. Sen. Bill Frist (R-TN), then the Majority Leader, disagreed with Bush's decision and said that the potential of stem cell research should not be limited. Democrat Claire McCaskill was elected as a senator for Missouri after campaigning heavily on issues like embryonic stem cell research, including ads featuring Michael J. Fox. After the new Congress settles in, the issue of stem cell research will be revived, but even with a Democratic majority, the House may not be able to override the President's veto with only a 53 percent majority of Democrats. 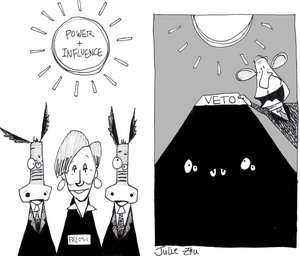 Photo:
Social Security: In 2005, the President proposed a plan to strengthen the finiancial support of aging Americans by privatizing Social Security accounts. In his February State of the Union Address, Bush mentioned how Congress defeated his plan. After he said that, a roar of applause from congressional representatives, mostly Democrats, filled the Senate Chamber of the Capitol. Since then, Bush nominated Andrew Biggs, a strong supporter of privatized accounts, to be the deputy commissioner of the Social Security Administration (SSA). Sen. Max Baucus (D-MT) wants to hold hearings on the problems in Social Security and Medicare as the new chairman of the Senate Finance Committee. Believing that the insolvency with Medicare is more critical now than that with Social Security, Baucas has said that Bush's plan to privatize Social Security is "off the table." Biggs and Baucas represent the major views on Social Security and the unresolved clash between the Democrats in Congress and the Republicans in the White House.

War in Iraq: After the invasion of Iraq in 2003, the war escalated into an international debate on whether the US should police the world and has forced many politicians to either support or criticize the Bush Administration's policy, making or breaking their political futures. If confirmed as the new Defense Secretary, Robert Gates will decide the fate American troops in Iraq. Some of his options are: to withdraw troops fast, to maintain troops' presence, to send more troops or to train Iraqi troops to eventually replace Americans. On Dec. 6, the Iraq Study Group, a bipartisan panel appointed by Congress to assess the situation in Iraq and recommend courses of action, released its findings, concluding that the situation is "grave and deteriorating." The report recommends training Iraqi army and police forces to get rapid-reaction forces out by 2008. William Perry, Defense Secretary under President Clinton, has voiced support for the plan, as have Democratic representatives such as Hillary Rodham Clinton (D-NY) and incoming Senate Majority Leader Harry Reid (D-NV). It is uncertain what Bush will do about the war in Iraq, but he must do something before his own party turns against him.

Corruption: After Tom DeLay (R-TX) and others were indicted in the Jack Abramoff-lobbying scandal and Mark Foley (R-FL) acknowledged sexually harassing pages while Republicans who knew about the scandal kept mum, the "moral majority" seemed to have hit a moral low. The scandals only fueled the Democrats' fire while campaigning on promises of honesty and integrity. Will the corruption of Congress by lobbyists and hypocritical representatives continue with a different party in charge? Future Speaker of the House Nancy Pelosi (D-CA) has promised to lead reforms on pork-barrel legislation and limiting K Street's influence, but can she? The co-evolution of lobbyists and legislators and the favors they provide each other is not easily changed. Here she may have problems making all Democrats vote along party lines instead of for themselves; and with such a delicate majority, she cannot risk alienating fellow Democrats.

In a divided government where the Democrats do not hold a two-thirds majority in either house, they cannot override a presidential veto without convincing some Republicans to vote with them. But with bills dividing even their own party, it will be hard to pass anything in either house. Riders and pork will still be attached to bills to gain representatives' favor, so nothing will have changed in that respect. In 2008, the presidential election will be the first in 80 years in which a sitting President or Vice President did not run. In an open-seat election, many Congresspeople will be vying for the Republican or Democrat ticket, and thus they may not do anything too controversial in the next two years. Politics aside, the 109th Congress will have a rough time passing any bill into law, no matter which party is in control.

Iliya Smithka. Iliya Smithka will graduate from neither the CAP nor the Magnet Program. However, she somehow managed to get a decent education. While representing no particular program during her stint on Silver Chips Online, Iliya was a spectacular staff writer, although she never really mastered the … More »