Deriving the night away: math by the moonlight

The halls of Blair are dark and an eerie stillness has replaced the hustle and bustle that filled them during the school day. But the school is not completely empty. Amid the silence, his phone vibrates in his pocket as he glances at the clock. It's 9:00 pm, and he has been at school for approximately 15 hours. He flips open his phone to hear a fellow math teacher, William Rose, instantly ask "Hey Giles, are you still here, too?" John Giles smiles before saying yes, knowing he is not the only teacher at Blair who keeps unconventional hours. 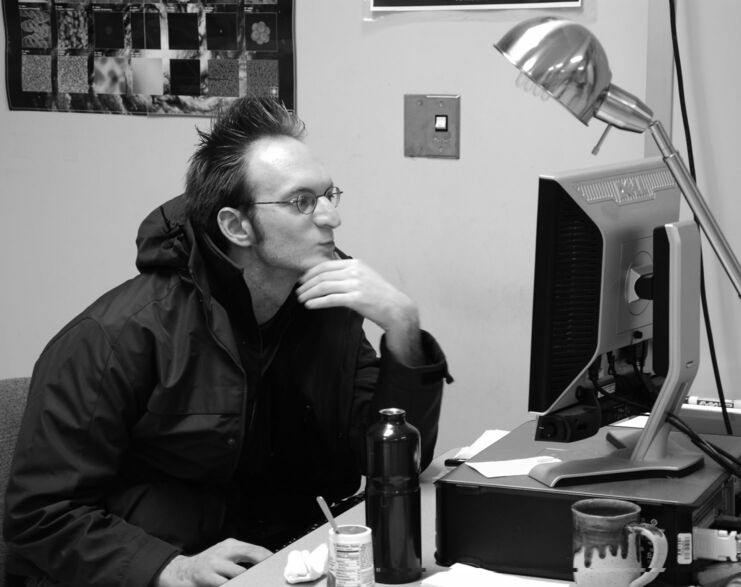 Photo: William Rose stays at school for hours after the school day has ended, preparing for upcoming classes and providing extra help for his students.

Photo: William Rose stays at school for hours after the school day has ended, preparing for upcoming classes and providing extra help for his students.

Giles, an Honors Pre-Calculus and AP Calculus math teacher, in his sixth year teaching at Blair, works a 12-hour day. He arrives at Blair at approximately 6:00 a.m. and doesn't head home until 6:00 p.m. or later. He teaches his classes, offers after-school tutoring, make-up quiz sessions, plans lessons and grades papers until it is dark outside of Blair's walls. Giles says that on rare occasions he has stayed at Blair until 11:00 p.m., adding questions to tests he will be giving the next day. "I am more last minute," he explains. "I have ideas and like to commit to them at the last second." But even after spending 12 hours at school every day, Giles says he also spends about 20 hours outside of school planning lessons and grading papers throughout the week. "Frighteningly, I am here on some Saturdays as well," Giles says.

Giles' work ethic stems from his desire to teach his students to the best of his ability. "If I do a mediocre job 100 people are affected by my actions," explains Giles. And as his work hours and ethic would seem to explain, Giles does believe that his work life is more important to him than his home life.

Rose, Giles' late night neighbor and Magnet math teacher, also has a unique work schedule. Rose gets to school at 6:00 a.m. and leaves at about 8:00 p.m. He stops working during the afternoon to grab a coffee from Starbucks or snag a sandwich from Santucci's, but other than that he is cooped up in his classroom in the 310s hallway for hours on end. In his fourth year at Blair, Rose spends about as much time at Blair as Giles does. Unlike Giles, however, Rose says he spends more time at Blair than he really needs to. "Giles actually works," Rose says. "I [mess] around a lot. I would go home earlier if I was much more disciplined." Rose explains that it takes a great amount of time to compose tests from scratch, and therefore the amount of time spent making tests depends on how long teachers have been teaching their subject.

For Rose, who is teaching the same subjects he did last year, it is easier for him to get home earlier than he used to. Rose breaks up his work by talking on the phone or stopping by to watch a volleyball game, causing him to still depart from Blair long after other faculty. Rose believes he could budget his time more wisely. "You know how kids go home and [mess] around for three hours? I do that too, but just at Blair," Rose explains.

Giles and Rose enjoy the peace and quiet working at unusual hours awards them. They understand that not everyone can stay at school as late as they do. "I know people have to go home to see people," says Giles. "I'm not forced home by anything other than my desire to watch a Maryland basketball game."

Blair is somewhat of a second home for Giles and Rose as they spend more than half of their day at school. "I've got everything I need here: coffee, Internet and a parking spot," says Rose. "But there are also things I have at Blair that I don't have at home like a photocopy machine, laser printers and hundreds of math textbooks."