The administration's recent implementation of a new detention policy, tested two weeks ago in the freshman hallway, is going big time. Now, students across Blair will be subjected to hall sweeps. Kids found outside classrooms after the bell rings will be locked out and given detentions. 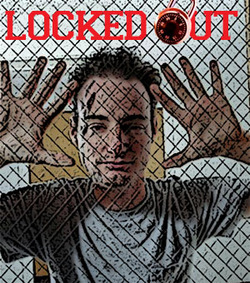 It's obvious that the administration is concerned with tardiness, especially in the 10th and 11th grade classes, and however misguided the new detention policy is, it wouldn't be an issue if more students came to class on time. However, the administration could be more imaginative in their approach to tackling student tardiness. The new detention policy, implemented without student input from the SGA, will only alienate the student body.

In addition to a multitude of other legitimate excuses for late arrival (car and student traffic), a new policy aimed at restricting hall and bathroom passes during classes will contribute to tardiness. A new policy this year allotted students only one "emergency" bathroom pass in all English classes. Many teachers allow passes from class only a few times per semester. The consequence: longer lines at drinking fountains and bathrooms during passing time. A student who needs to use the bathroom and has class on the opposite side of the school will be hard-pressed to make it to class in a fleeting 8 minutes.

The new policy also punishes students twice for the same offense. Isn't there some double jeopardy clause that we could work in here? Teachers are already supposed to manage student tardies and absences under the "Loss of Credit" policy. If a student is late for class 15 times over a semester, he or she fails the course. The threat of an LC obviously isn't alleviating student tardiness, but that's because teacher and administrative enforcement of the LC policy is lax. Instead of punishing students with after school detention, which isn't a viable option for kids who work or need to be home after school, the administration should concentrate on improving enforcement of the policy they already have.

In spite of the administration's attempts to encourage student attendance, the new detention policy may just have the opposite effect. For some students at Blair, neither the LC nor the detention policies are deterrents for tardiness. It's likely that some students will simply skip the class they arrived late to instead of facing detention. The new policy would also extend tardiness for students who are late, by making them find their administrator and then wait to be issued a pass and detention slip (Who wants to wait around to be punished, anyway?). A student arriving only seconds late to class would probably not cause much of a disturbance. With the new policy, once the student is directed to the administrator and comes back to class five minutes later, the teacher has probably already began her lesson plan and would be interrupted by a delayed entrance.

The administration's autocratic implementation of the new detention policy comes only months after the controversial ID policy, which many students opposed because of a perceived lack of student representation in the issue. Now, the administration has developed a punishment for tardiness without any student input.

For a questionable policy that would affect large numbers of Blair students, the administration should have at least told the SGA what they were doing before they made the announcement to the student body. Now, only time will tell if the new detention policy effectively cuts back on student tardiness or causes a bigger problem: hundreds of disgruntled students in detention or kids skipping class in order to avoid what they believe is a harsh and unfair punishment for an offense that, often times, has a legitimate excuse.