The Blair community ice hockey team could not keep up with Springbrook Friday night, crumbling 7-2 to bring their record to 0-3. The Blazers held their own in the first period, but the game "got taken from us," according to freshman goalie Peirce Marston due to disputable officiating and a loss of momentum. 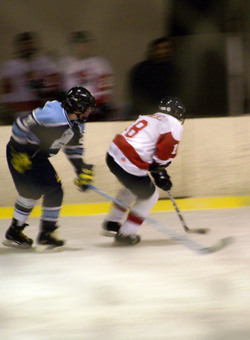 Springbrook, made up of players from a few Downcounty Consortium schools, didn't hesitate to set the ice on fire, scoring twice in the first four minutes of play. Luckily Marston quickly recovered with a series of saves minutes later, and the offensive duo of sophomore Jens Josephs and senior Alex Sandberg-Bernard led a powerful counterattack. "We came out hitting," Josephs said of the team effort. "It just clicked." Nonetheless, the Blazers still trailed 3-0 at the end of the first period.

In the next period, the Blazers sustained their offensive pressure and managed two goals. Halfway through the period, senior Tyler Kelly charged the puck down the ice and missed on a breakaway. The puck found senior Johnny Slenkovich, who glided it into the back of the net to give Blair its first point. The next goal came from senior Ben Kastner on a breakaway with two minutes on the clock.

On the other hand, the second period also marked a series of questionable calls in favor of the Blue Devils. "I don't like to be overly critical of refereeing," head coach Kevin McCabe said. "But I don't think it was the best effort I've ever seen." The Blazers saw more penalties than the Devils, for hooking, charging and tripping. "I don't think the infractions warranted the penalty time," McCabe said, especially when similar plays did not spur the same response for the Devils. The alleged disparity – combined with a skilled Springbrook goalie – wound up costing Blair, as Springbrook capitalized on the power play, moving to 4-2 to end the period.

With help from senior Tobi Adeoye, Marston made some good saves, but sloppy defense allowed Springbrook to sneak in three more short goals. At one point, Springbrook's Peter Myers sent not only the puck but his entire body ricocheting into the net. 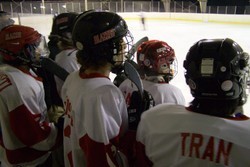 Photo: The Blazers hockey team watch the game as the second period comes to a close.

Photo: The Blazers hockey team watch the game as the second period comes to a close. Photo courtesy of Julia Seiger.

In a heartbreaking final play, Blue Devil Pierre Maurelli crossed the puck from the left side towards Marston, who caught it in his gloves, only to fumble and toss it back into the net.

Always an optimistic bunch, the hockey team insists that Friday night's score does not foreshadow the rest of the season because they intend on being successful. "This is the best year we've had," Josephs said.

The disappointing final result does not encompass Blair's enthusiastic attitude or honorable efforts in the first part of the game, according to McCabe. "As much as we lost," he said, "I'm encouraged by what we saw tonight."