Did Dwayne Haskins deserve to be cut?

In the 2019 NFL Draft, the Washington Football Team drafted Ohio State (OSU) quarterback Dwayne Haskins with the 15th overall pick. This came as a surprise to many because Haskins was projected to be drafted much earlier, as early as a top-3 pick in some mock drafts. 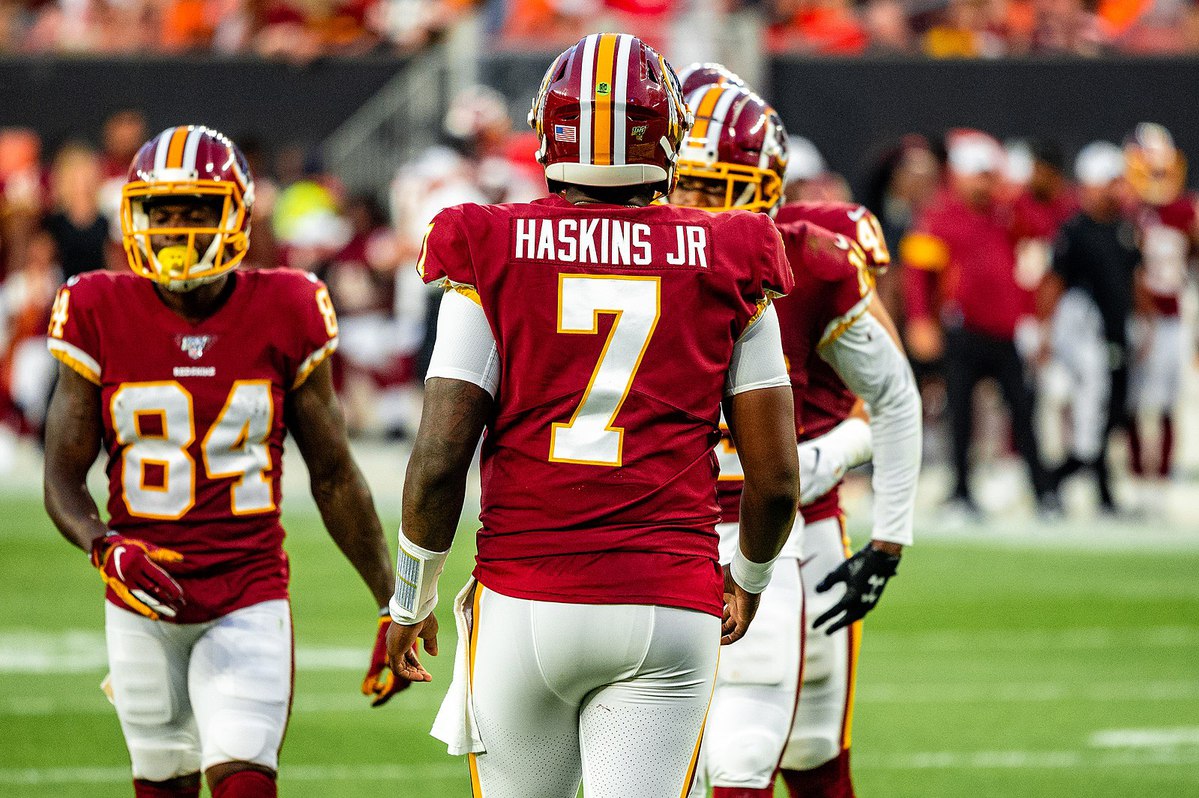 Photo: Washington Football Team quarterback Dwayne Haskins started the season as the starting quarterback but was demoted after week 4 (courtesy of Erik Drost)

Photo: Washington Football Team quarterback Dwayne Haskins started the season as the starting quarterback but was demoted after week 4 (courtesy of Erik Drost)

I, along with many Washington fans were excited about this pick, and for good reason. Haskins was a finalist for the 2018 Heisman Trophy after winning 13 out of 14 games in his senior year at OSU, and totaling 4,831 passing yards and 50 passing touchdowns.

I am a lifelong Washington football fan, so I had a hard time just giving up on our first round quarterback. Haskins had a chance to work behind and learn from Alex Smith, a 15-year NFL quarterback. I thought holding onto him could be a worthwhile investment, but after his abysmal performance, both on and off the field, it became clear we couldn't keep him any longer. Cutting Dwayne Haskins after just two seasons was the right thing to do.

Initially, Haskins was the second-string quarterback behind Case Keenum, who Washington received in a trade from Denver. But in Week 4 of the 2019 season, Keenum was benched in the second quarter and Haskins made his first regular season appearance, in which he threw for a lackluster 107 yards and three interceptions.

Haskins never bounced back from his first poor performance. In total for the 2019 season, he started seven of his nine appearances (winning just one), throwing for 1,365 yards, seven touchdowns, and seven interceptions. Haskins also fumbled six times, losing two of them.

Over the summer heading into the 2020 season, Haskins showed off his summer grind on social media. It was reported that he dropped 11 pounds and cut his body fat by seven percent. This gave some Washington fans a sense of hope after a disappointing rookie campaign. Haskins was named a team captain and the starting quarterback leading into Week 1.

Haskins led Washington to a Week 1 win over the Philadelphia Eagles with 17 completions for 178 yards, a touchdown, and no turnovers. Haskins would proceed to lose the next three games, including a three-turnover game against Cleveland, posting just 939 yards, four touchdowns, and three interceptions total.

Heading into Week 5, Haskins was benched for offseason signee Kyle Allen and moved to the third-string spot, behind Alex Smith. Whether it had to do with poor performance, work ethic or the reports that he was bragging about his stats after a Week 4 loss to Baltimore, this came as a shock to many. After Allen suffered a season-ending leg injury, Smith was called up to start in Week 10 and Haskins moved to the second-string spot.

In Week 14 against the San Francisco 49ers, Haskins had to relieve Smith at the start of the second half due to a calf injury to Smith. Haskins looked far from impressive, throwing just 7 completions on 12 attempts for 51 yards in the second half, including a horribly-missed slant pass to Terry McLaurin that nearly led to an interception in Washington's own red zone. Haskins is lucky that Washington was able to score two defensive touchdowns, courtesy of rookies Chase Young and Kamren Curl, because he could not get the offense going whatsoever.

After the Week 14 win, Rivera stated that he has shown growth since being benched in Week 5. "The first couple of series, you saw a lot of quick decisions, good decisions… some poise back there just operating the offense" Rivera said to NBC Sports Washington. After Week 14 and a strong second half in Week 15, I felt confident in Haskins and wanted to see him stick around.

But, just two days after the Week 15 loss against Seattle, photos of Haskins emerged where he was maskless at a club. This marked Haskins' second violation of COVID-19 protocols this season. This is just purely immature, especially considering that Rivera just beat cancer earlier this season. Washington fined Haskins for $40,000, the largest COVID-related fine all season from any team.

With Alex Smith's lingering calf injury, Haskins was still chosen to start Washington's Week 16 game against Carolina, with Taylor Heinicke as his backup. In a game where Washington could have clinched the division, Haskins looked horrible, turning the ball over three times in the first half, including two boneheaded interceptions. The offense couldn't get anything going. He was benched halfway through the fourth quarter, ending with just 154 passing yards on 14 for 28 passing with two interceptions and a fumble lost. Following the Week 16 loss, Haskins refused to speak to the media and he quickly made his way home after the game. He held a press conference from his home. The next day, Haskins was released by Washington.

Haskins was in the second year of his four-year rookie contract. I, personally, tried so hard to believe in Haskins and wanted him to be great, but at a certain point, those feelings went away. He has to work on a lot of his game: fumbles, not telegraphing passes, better decision-making, reading through progressions and so on.

Haskins spent just three seasons at OSU. Haskins redshirted his freshman year, served as the second-string quarterback to J.T. Barrett his second year, and spent his third year as a starter and Heisman finalist. With this being said, coming into the draft, Haskins was relatively inexperienced.

Haskins' rookie year was very unstable, something that will really hurt an inexperienced guy like himself. After Week 5, former head coach Jay Gruden was fired, and they ended the season with just three wins and 24 players on injured reserve. It is certainly possible that Haskins would have been a lot better off with a different team. This season seemed a bit more stable and he would have Alex Smith as his role model, but nothing changed for Haskins. He still made the same mistakes and still misbehaved off of the field.

Another concern is his coachability. During a practice, veteran linebacker Thomas Davis tried to confront Haskins about staring down routes. Haskins was quick to get defensive, and wouldn't admit that Davis was right. This rubbed a lot of Washington fans the wrong way, considering Davis has been in the league for 15 years, while Haskins is just a second-year man.

As previously mentioned, he struggles a lot with turnovers. In 13 career games, Haskins has fumbled ten times, losing four. One could partially attribute this to the poor play of Washington's offensive line, but it's still inexcusable. On top of this, he has thrown ten interceptions in his career, and from the "eye test," you can see that he doesn't really scan the field and it seems like he picks who he's gonna throw to before the ball is snapped.

After watching Haskins' terrible performance against Carolina, it became clear that Haskins doesn't have what it takes to be an NFL quarterback. I really liked Haskins coming out of OSU, so it was really hard for me to just give up on him, but after his off-field shenanigans and inadequate performances, I knew it was time to say goodbye.