How Native tribes are coping with COVID-19 despite a lack of federal funding.

Christine Benally, a member of the Navajo Nation in the midwest, works to lower the rates of violence in Native populations through community outreach. Native communities often have high amounts of childhood abuse, which can lead to trauma and a host of health issues. Benally sees these issues so often that she calls it “a pandemic in itself.”

This trauma can lead to a higher risk for substance abuse and chronic disease, which can increase susceptibility to COVID-19. “Those who have these addictions or diseases are at a higher risk for COVID-19 morbidity and mortality,” Benally explains.

Across the country, the pandemic has hit Native communities hard. According to the Centers for Disease Control (CDC), Native groups make up 1.3 percent of COVID-19 cases while accounting for only 0.7 percent of the U.S. population. 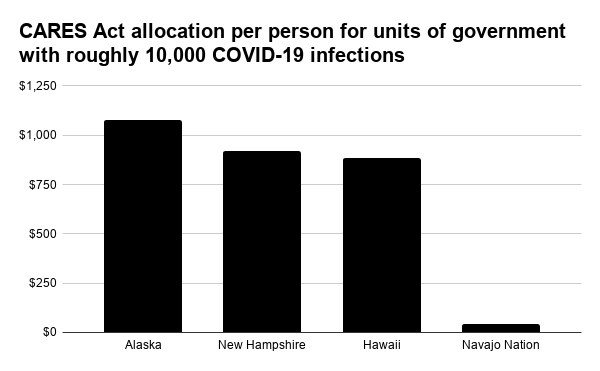 In Maryland, however, it is hard to tell how tribes are faring since the state does not track COVID-19 infections for Native communities.

There are currently two recognized tribes in Maryland, the Piscataway Indian Nation and the Piscataway Conoy Tribe, as well as several recognized indigenous groups. None of these communities have received any state or federal COVID-19 funding.

State and federal governments can choose to recognize tribes, but what that recognition entails can vary. In Maryland, state recognition acknowledges a tribe's existence and allows it to have public gatherings, but it doesn’t grant funding or qualify the nation for land rights.

Federal recognition, on the other hand, means access to funding and programs. Since no Maryland tribes are federally recognized, they are not allowed these benefits. To become federally recognized, tribes need to prove their sovereignty to the U.S. government through either an executive order, a historical treaty, or an act of Congress.

Aside from state or federal recognition, tribes can receive funding through non-profit organizations, such as the Cedarville Band of Piscataway Indians, Inc. in Maryland.

However, the struggle for funding doesn’t end if a tribe is federally recognized. While the federal government appropriated $420 million directly to tribes through the Coronavirus Aides, Relief, and Economic Security (CARES) Act in April, tribes still received significantly less funding than states per person. For example, the Navajo Nation and the state of Alaska have roughly the same total amount of infections, but Alaska was appropriated $1,708 per person, while the Navajo Nation only received $44 per person living on the reservation. While the Navajo Nation isn’t reflective of all tribes, it is one of the largest in the country and has had one of the most drastic outbreaks.

But problems don’t just arise from the limited amount of money tribes receive. Federal money, if granted, comes with a time limit. In the case of the CARES Act, the deadline to spend relief money is Dec. 31, according to Bette Jacobs, professor at Georgetown and a member of the Cherokee Nation. Moreover, Jacobs says that if tribes spend the money outside of CARES Act stipulations, they may have to pay it back.

Three months may seem like sufficient time to spend relief money, but it can take a while to allocate funds effectively towards the underlying problems that have made the pandemic worse. “It's not like this is the purchase of certain supplies,” Jacobs says. “This is infrastructure issues, and medical records, and capacities of that nature.” Jacobs underscores how tribes don’t just need personal protective equipment; they need fundamental change.

One of the areas Jacobs points to is infrastructure improvements, such as across the board access to well-built homes and reliable internet. While the funding from the CARES Act could help tribes get back on their feet from COVID-19, it all depends on whether they can spend the money in time, according to Jacobs.

One issue that has exacerbated the infection rates of COVID-19 is the state of Native homes. One-third of homes on reservations are considered overcrowded by the National Congress of American Indians. Living in such close proximity puts everyone in the home at greater risk for COVID-19 if all household members are not able to keep a strict quarantine. This is not always possible since, according to a Harvard University study from September, 51 percent of Native people had internet connectivity issues, meaning they might not be able to telework.

Additionally, according to the United States Department of Housing and Urban Development, 12 percent of homes on reservations have insufficient heating and cooling systems, as opposed to 0.1 percent of U.S. households overall. Since COVID-19 spreads through small particles in the air, an inadequate ventilation system leads to an increased chance of contracting the virus.

In addition to safety concerns, the pandemic has heightened economic strains on Native communities. According to Harvard University, 46 percent of Native adults have had their hours cut, been furloughed, or lost their jobs as a result of COVID-19. In comparison, the average monthly national unemployment rate during the pandemic is about 10 percent.

These patterns of inequity across the country are true in Maryland as well. Jansikwe Medina-Tayac, who is a member of the Piscataway Indian Nation and graduated Blair in 2020, says that while her immediate family in the Washington D.C. region is doing fairly well, members of her tribe in southern Maryland have been struggling from a lack of medical attention and relief funding. “A lot of times, it's really expensive to go to the doctor, or the doctor’s far away,” she says. In response, Medina-Tayac says urban members of the nation have been helping from afar by raising money for masks and supporting each other through the pandemic and beyond.